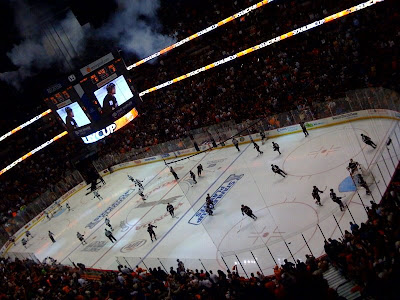 ARTHUR:
I was in the queue for the bathroom during the first intermission last night when a group of Sharks fans decided to get in line and talk trash. Normally, I wouldn't mind it. We were an 8 seed up 2-1 in the series. If anyone was going to feel self-doubt after hearing a little trash talk, it would be a San Jose fan. But these fans weren't calling out the Ducks. They were calling out Ducks fans, and the number of them that did and DIDN'T show up.

Now, lest you San Jose fans buy into the East Coast bias and Kevin Lowe hate on the Anaheim hockey market, I remind you that Anaheim sold out its entire schedule last season and seven straight rounds of playoff play before Tuesday night's game. The Kings haven't sold out an entire season since 1991. And the Sharks, good as you were this season, were one game short of selling out all 41.

So, why the empty seats this week? A lot of people will tell you that fans were home watching the Laker game or attending the Angels game. Or maybe that playoff ticket pre-order was poor because sales opened when the Ducks had yet to clinch a playoff spot. I don't buy any of that, really. Even if there were no scheduling conflicts and the team clinched a spot earlier (provided it was still 8th), I'd guess that the games still wouldn't sell out. The economy has been roughing up the Ducks' ticket sales all year.

I point you to the attendance numbers for Anaheim and San Jose for the past two seasons. You'll notice that Sharks average attendance increased by around 70 from last season to this season, while Ducks average attendance dropped by 200 in that same time frame. Before you go and attribute those changes to fan enthusiasm, I now point you to the Sacramento Bee unemployment map. As you can see, the Bay Area is a healthy green (only Santa Clara and Alameda are experiencing double-digits), while Southern California is hit much harder. A green Orange County is surrounded by much larger counties that are experiencing 11.3% (LA), 12.5% (San Bernardino) and 13.2% (Riverside) unemployment.

So, all of you Sharks fans that were heckling attendance? You were basically laughing at people that lost their jobs. Classy.

On the bright side, if we do eliminate you, I think we'll find some of that fan enthusiasm you accuse us of lacking.