Facing the Ducks at Face Off Fest.

Share All sharing options for: Facing the Ducks at Face Off Fest. 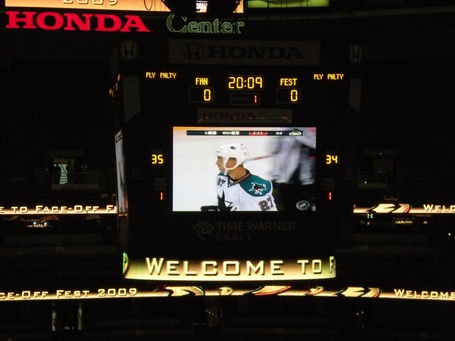 DANIEL: This is Anaheim Calling to the Hockey World, the Ducks hosted the annual Face Off Fest tonight. It's a great opportunity to come face to face with your favorite players and get an autograph or dish a compliment. The event is only available to season ticket holders and offers so much more than the chance to get a few autographs. Fans were allowed to skate on the Ponda Center ice, take a tour of the locker room, and enjoy a complimentary hot dog/chips/soda combo to make the autograph line a little more tolerable. And if that wasn't enough, they let us watch the Caps sink their teeth into the Sharks on the jumbotron.

Occasionally, it's nice to come face to face with our favorite players and see them for the mortals they really are. I am writing this more to admit that I enjoyed a night of being a complete fan boy. I've said before, that when the Ducks traded for Selanne I became a serious hockey fan. It's hard to explain, but he changed the entire culture of the team. It was something Anaheim seemed to be waiting for. He was a legit star and he probably turned Kariya into a full blown star as well. Even though I waited an hour and a half, a ridiculous amount of time, it was worth seeing him be impressed with my vintage Duck Jersey.

Also, i've known Arthur a long time and I don't know if I've seen him as joyous as he was at this event. He was grinning like he had just seen Isla Fisher making out with Salma Hayek. I'm talking the real deal complete with wandering hands. All this from getting signatures from Randy Carlyle and Brian Hayward. I think that as fans, and more so as bloggers who analyze every move on the ice, we forget the simple joys of sports. Writers talk about it, but I think there is a connection fans experience with a team to which they are truly committed. I think events like this allow us to stop being angry about bad plays, bad trades, and bad contracts, and instead we simply appreciate the players who lace them up for us. Events like this remind us of why we are fans in the first place, and I'd like to personally thank Teemu Selanne for opening my eyes to what is, in my opinion, the greatest sport I've seen, and all the memories that have come with it.