"You Gotta Love It"

Share All sharing options for: "You Gotta Love It" 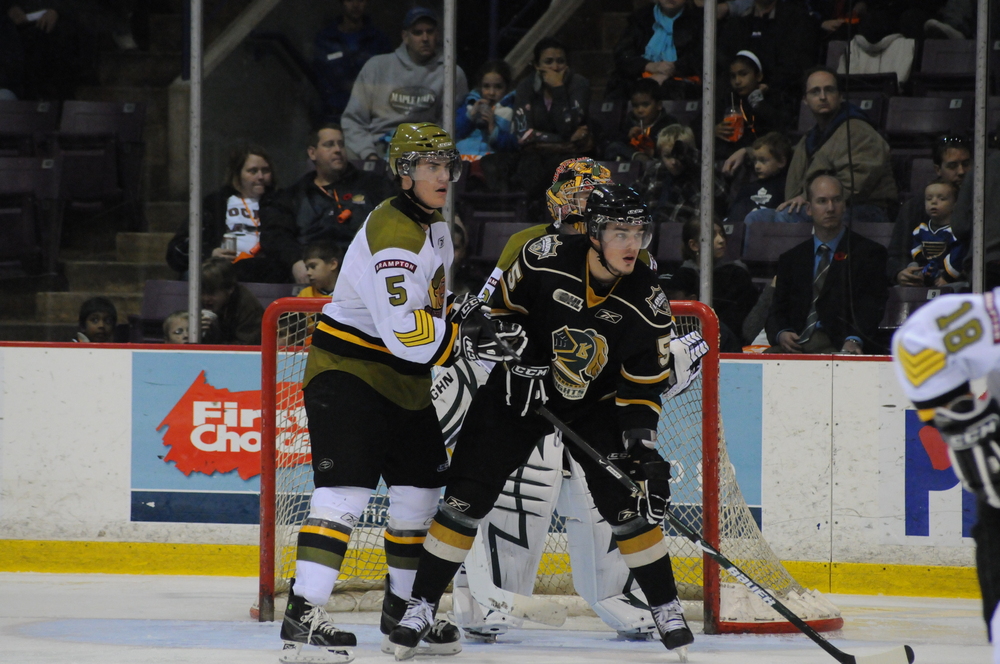 It was a 2-on-1. Scott Niedermayer misread the play, and he had activated himself headfirst into a turnover. The Ducks jersey covering his mistake bore the number 73, a foreign numeral whose unusually high value denoted the rookie status of the player wearing it. And having been drafted just three months before, the word 'rookie' described Matt Clark better than many of his young teammates in the preseason, but he dealt with the situation as he has dealt with everything in his career thus far: calmly, confidently and relishing the opportunity.

"At that point of the game, I felt I got my legs under me," recalls Clark. "I saw that play develop, and I knew it was going to be a 2-on-1, so I just went back to my old self, just what I'd do if I was playing another OHL game." What he did was throw a diving sweep check, trapping the puck under his body and sliding it into the half boards. The rookie bailed out Scott Niedermayer. "That's my job, and it's what I expect to do."

The play capped off a 12 month meteoric rise for the 6'4" 220 pound defenseman, who had started the year an 11th Round OHL Draft rookie fighting his way onto a talented Brampton Battalion squad. With hard work and determination, Clark not only reached the top of the depth chart but the top of the 2nd Round draft boards, finishing 31st on Central Scouting's list of domestic players and impressing a Ducks team that, at the time it interviewed him, did not have a 2nd Round pick.

"Anaheim was a team that I grew up watching," says Clark. "I loved their compete level and loved their style of play . I went in there, and I just tried to be as honest with them as I could and tried to leave a good impression with them." The impression stuck. The Ducks traded down to select Clark 37th overall, and he vindicated that decision in his first outing in an Anaheim sweater.

Returning to the OHL after training camp, Clark's sophomore effort has been just as diligent and just as impressive as his rookie year, but the recognition hasn't come as easily. Despite playing well in his limited ice time in the Subway Super Series, Clark did not get an invite to Team Canada's selection camp for the World Juniors. "Yeah, it was a little disappointing," Clark admits, but he notes that he didn't dwell on it, "After the whole Canada-Russia game, which was a great experience, I came back to Brampton and just really tried to help our team get better here. And that's really what I've been focused on ever since. I haven't really let it bother me."

And the Battalion need his focus this season, as they struggle in the standings, a far cry from the team that Clark made as a rookie. "Goals have been hard to come by for us this year," he says of his Brampton squad, ranked dead last in goals-for in the OHL. "We have a young group of forwards who are very skilled, and I think with some more maturity in their game, they'll become a very good offensive bunch of guys, but for now, I'm just trying to get pucks on net and improve [my game] that way, because if we can get some points from our back end, that'll certainly take the pressure off our forwards. And then maybe they can start relaxing and just start playing their game and putting some more pucks on net themselves."

Offense is new to Clark, who has always considered himself a shutdown player, but the team needs more from him this year. They need him to create scoring chances, they need him to quarterback the power play and they need him to be the go-to guy when the chips are down. And he wouldn't have it any other way. "That's what you want. You want your coaches to expect the best from you and rely on you [to be the best]," says Clark, "It's a little added pressure, but you gotta thrive on it. You gotta love it."

And while he hopes to become effective offensively, Clark's heart still belongs to his defense. "It's just something I love doing," he explains. "I love playing a physical kind of game, making good first passes and letting the forwards do most of the scoring. It's a role that a lot of people don't necessarily see themselves [in], because a lot of people want to be the big goal scorers, big winners, but every team needs defensive players. I was just drawn to that role and grew into that role. I really relish it and love it. Shutting down the other teams' top players is something I love to do and wanna keep doing."

And shut them down he does. From his notoriously vicious open ice hits to his surgical stick work in the corners, forwards rarely get the better of Clark. "When I see a defenseman with the puck on the other team, I try to imagine what I would do with the puck and then try to be there when he tries to put the puck there and [I try to] intercept the forwards. And if you get there quick enough, you can get to them before they can do anything with it . . . [and] winning battles along the boards, that just comes from the competitive side of me. When the puck's along the boards, I go in there, and I wanna make sure that I get it. I don't wanna take second place. So I go in there with the idea that I'm going to come out with the puck."

Clark is dominating at the OHL level, but he knows that the road to the NHL is paved with more hard work. "There's always room for improvement," he says. "Even being a shutdown defenseman at the next level, you still need to be able to get pucks on net and get a good shot through from the point. There's always aspects I can work on. I can always be quicker. I can always get stronger. I can always make better passes, make better decisions with the puck, better decisions without the puck. It's a job that you never have to stop working towards improving."

Turning 20 in October, Clark's efforts to get to the professional ranks may soon pay off, but the young defenseman is quick to point out that the future is uncertain. "I don't really know what's going to happen next year," says Clark. "Obviously, right now, Anaheim doesn't have a farm team in the AHL. So who knows what's going to happen next year? I'm kinda just gonna roll with it and just do everything I can to improve and try to really impress them when I go down to Anaheim in September."

Impressing Anaheim seems to be Clark's forte, and this September, he will look to add some offense to a training camp repertoire that already included fights, big hits, puck retrieval along the boards and covering for future hall of fame defensemen. You gotta love it.