Share All sharing options for: Practice Makes a Perfect Experience

ROBBY:
As you may have heard, yesterday I had the opportunity to attend an exclusive closed practice at Honda Center and meet the newest captain of the Anaheim Ducks, Ryan Getzlaf. I won this opportunity by selecting an orange puck during last year's Mystery Puck promotion. For those unfamiliar with the event, you can buy as many signed mystery pucks as you want for $40 per puck (all money goes to the Anaheim Ducks foundation). While every puck is signed by someone on the team, there is one orange puck per player on the team. So out of roughly 500 pucks, only 20 or so are orange pucks. Yeah, I was that lucky (especially since I managed to get Getz). 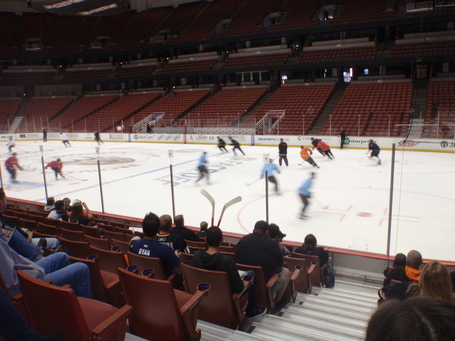 Below the jump you'll find pictures and videos from my day at Honda Center, as well a a complete breakdown of yesterday's practice (including some choice quotes overheard from coach Randy Carlyle). I'm not including all of the videos I shot yesterday, so if you want to see everything, you can check out my YouTube channel.

Before I begin the breakdown of yesterday's events, I first want to send a HUGE thank you to the Anaheim Ducks staff that ran yesterday's event. Because we found out about the event relatively last minute, we were in the position of having my mother with us at yesterday's event (she had come up the night before from San Diego). According to the invite, only two people were supposed to be able to attend the practice (the winner and one other person). Thankfully, the Ducks staff completely understood our position and graciously allowed us to have my mom sit in for the practice as well. They really didn't have to bend the rules for us, but I significantly appreciate that they did. 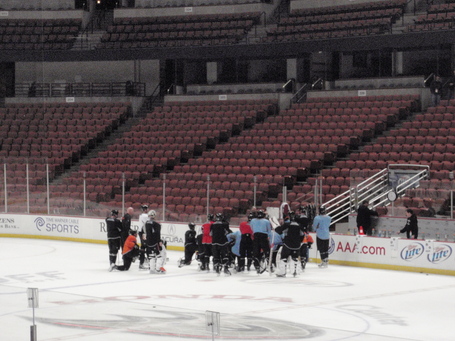 While Curtis Zupke already broke the news about the line rushes yesterday (Sexton instead of Blake on the second line and Carter centering Beleskey and Blake on the third), I thought I'd give you a detailed look at the practice (as well as the D-pairings I was able to divine).

The practice roughly broke down into seven separate drills:

If you've never goten a chance to attend a practice, it's fascinating. Watching the coaches actively coach players and direct them on the ice is really interesting. In particular, Foligno and Carlyle were very active during the PP/PK drill with Foligno doing the majority of the PK coaching while Carlyle offered advice to both units.

Defensive Pairings
There were some unexpected changes to the defensive pairings at practice. I want to point out that this is what I was able to see during one of the breakout drills, so they may not be what we can expect to see. Regardless, they were different than what we've seen all year, so I wanted to include them here. 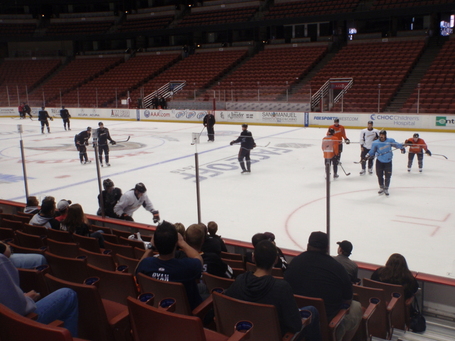 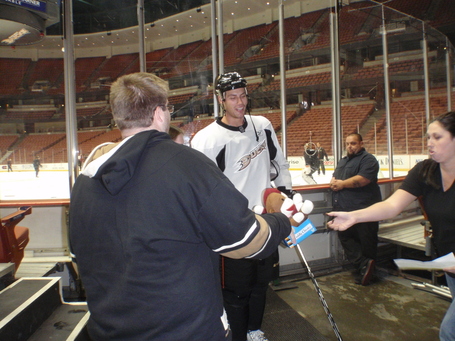 If you ever get the chance to attend a practice, I certainly recommend checking it out. It's a great way to see the personality of various players and it's really interesting to see how the players respond to coaching. In particular, Dan Sexton and Saku Koivu seemed to be very responsive and were frequently used for positioning examples during the PP/PK drill. 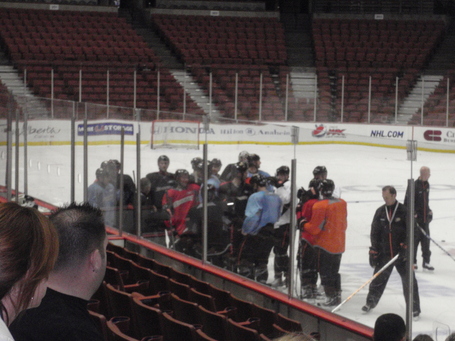 I'd like to thank the Ducks for putting on this event. It's a great way to raise money for their foundation, and it provides an excellent opportunity to really humanize the players in the eyes of the fans (not that hockey really struggles with this).