ARTHUR:
As I noted in a previous post, MLX invited me to perform a complimentary product review on their new hockey skate. I've taken them out for a couple of solid test drives this week, and I'm ready to deliver my verdict.

The moment I saw how much this skate flexed when hot, I was skeptical of how sturdy it would be when it cooled. I put a premium on comfort, but with a hockey skate, you need a lot of protection. Otherwise, you might as well just go out there in a comfy leather skate. Sergei Gonchar suffered a bruised foot wearing MLX's last year, and I wondered if his skates helped him avoid a fracture or if they exacerbated what should have been a mildly dangerous block. I'm happy to say, after testing the MLX's and comparing them to my inline skates, this is a durable hockey boot.

In designing the skate, MLX opted for a shortened toe cap, which makes it easier to put their custom-fit inserts into the toe box. At first, I thought that this offered less protection for the top of the foot, but then I noticed that the skate's removable tongue attaches to the base of the laces using a piece of plastic as thick as my Bauer toe cap. When I compared the total length of the protective area from toe to laces, the skates are actually the same.

Also, the MLX skate gets wider at the base of the big toe, sporting a molded plastic protector, almost like a bunion holder. This stretches the plastic protection along the side of the foot a little longer than what my Bauer's offer. After comparing the two, I realized that I'd be glad to take a puck off the toe in these skates, and I knew I'd be comfortable doing it.

Looking at the skates online, I was concerned about the white stripes running along the sides of the boots. They reminded me of the soft spongy part of Tinker Hatfield's Air Jordan V's. I'm happy to say that these white stripes are a solid composite material and receive a slapshot nicely (or so I learned the hard way).

The final bit of protection is the removable tendon guard, which flexes backward. Now, I'm not a great skater on ice, so I rarely display the agility that requires a backward-flexing tendon guard. I did use it once or twice while jumping from my shinpads back onto my feet, and that had a nice feel. Still, for me, the best part about the tendon guard is the fact that it's removable, allowing you to replace it or modify it to create a different feel to the skate. 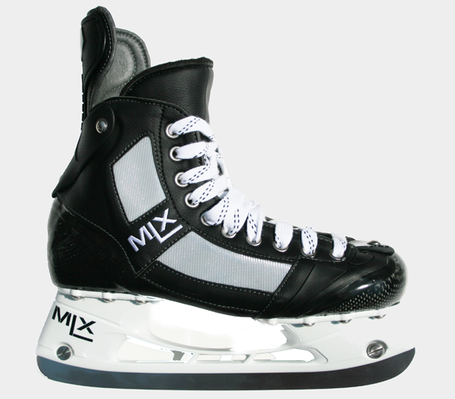 We've arrived at the wow factor on these skates. I have fairly wide feet, nothing freakish, but enough that I own and use shoe trees for my dress shoes and prefer a half size to a size larger than my true size in my everyday shoes.

MLX doesn't have half sizes, narrow sizes or wide sizes. Instead, the skate comes with custom inserts that you can place in the toe box to accommodate the length of your foot, and the company relies on the skate itself to mold to you perfectly.

And they're not kidding. Out of the box, the skate is rather tight. It was wide enough for my footprint, but I couldn't get the tongue and my foot in the boot at the same time. After 16 minutes in the oven: night and day. I was actually wondering if I shouldn't lace them extra tight to make sure it didn't end up too wide. It's an impressively malleable skate for how durable it is when it cools, and I'm confident that I can heat it up to make extra adjustments, big and small, in the future.

I really felt the fit on the ice, too. My left leg has its problems, including a stiff ankle and a sore knee, so maximum ankle support while still maintaining maximum comfort and range of motion are important for me. And that's what I got skating in the MLX's. It really was like I was skating in a basketball shoe.

Skating backwards felt great. I was able to flex against the laces, c-cut and crossover without ever feeling stiffness or wobbling in my left leg. And now that I finally had an ideal fit in the toes, it didn't hurt when my weight transferred to the front of the skate, so just the feel of moving backwards was vastly different from what I'm accustomed to in a hockey boot.

The price point on these is very high right now, coming in at a steep $799. However, MLX has provided numerous coupons in their initial rollout, sometimes up to 50% off. The price point of $400 to $800 puts them in the same range as Graf skates, who also pride themselves on a superior custom fit and, like MLX, must price their product for what it costs to manufacture in Canada and not overseas.

Now, I've never bitten the bullet and purchased Graf skates, though I have tried on a pair or two. I can't compare the products directly, but I will note that both Graf and MLX have the reputation of being heavier skates. I'm primarily an inline player, so I don't mind the weight, but it is rightfully a concern for many customers. In comparing what I know of both skates, I will say that I feel that MLX offers a bit of experimentation; you can pop in different insoles (even the Graf SIDAS footbed) and feel confident the skate will re-mold comfortably. However, at the end of the day, MLX and Graf both sell well-made but expensive skates, and you should compare when you're in that price range.

I won't pretend that I'm the kind of skater (especially on ice) who can offer a performance recommendation, but there are NHL-level players that wear MLX skates: Sergei Gonchar, Dustin Byfuglien and Daniel Alfredsson to name a few. I'm sure there is some give and take, as with any product, and Alfredsson noted the weight of the skates when he switched but emphasized how perfectly they molded to his feet. They won't be for everyone, but for many people, I'm sure they will be a godsend.

I'm one of those people, having never fit properly into any hockey boot and playing with discomfort for a lot of my life. Excuse me while I convert these MLX's to inline.