ARTHUR:
With the Pond revamping its concessions through a partnership with Aramark, you have many new choices when it comes to food at Ducks games this season. In an effort to help you navigate that decision making process, I asked the writing staff to tour the various eateries during the the team's first homestand.

Now, this won't be a Zagat Guide or anything. Eating assignments were determined by the time-tested 'dibs' system and were claimed via group email contingent on the person reaching the arena in time and demonstrating a willingness to wait in line (I'm looking at you, Jen). Additionally, each writer brings their personal style to the review, along with their personal expectations of the arena food experience, but feel free to ask them additional questions in the comments.

We start with Brett (aka moderator Floyd Gondoli), who usually sits club level but wandered out at our behest. He's previously been credited as Floyd, but he now has his own section under his preferred moniker. Brett tackled Simply Chicken in Section 212 at the home opener then returned to take on the Hot Dog Stop which has multiple locations in the 200 and 400 level, and he brings his reviews to you in pronounced Thompson-ese.

BRETT:
While the premise of our assignment was clear, the details of its execution were not. It was a warm Wednesday evening and myself and my fellow Anaheim Calling gastronomes were to our destination: the Ponda Center in Anaheim. A sputtering flurry of buzzes and beeps came from my phone, each carrying an email from one of my cohorts, describing their inclinations toward a particular taste. I was left with dwindling options for my own ingestion, so I fired off a quick response, "I'll take the chicken place."

Our editor had previously sent us a listing of the various new stalls, and I had planned to scrounge for food at the game a long time in advance. 5:45....too late for the red carpet, far too early for the game. I made my way to the club level and made my first check of the facilities. I had been to all of the preseason games, so I knew that in the vast overhaul of the concessions, the club level had remained relatively unscathed. The carved sandwiches and nacho bar were still there on opposing sides, though there were a few new additions to the salad choices and a cuban sandwich I didn't remember. The club level didn't need much fixing, and they didn't do much to it. I was disappointed and relived at the same time, a strange feeling indeed. 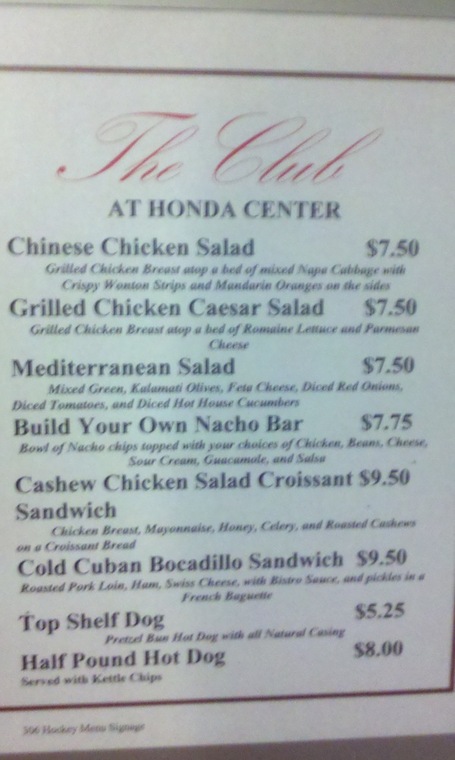 I made my way downstairs to the Simply Chicken stand. No line. Could this be a bad omen, or simply a reflection of the sparse crowd in attendance this early, as it was still over an hour before the dismantling of the Canucks could begin? I sidled up to the counter and stared at the menu. Chicken strips and chicken sandwiches. Not sure what fare I expected, other than that. 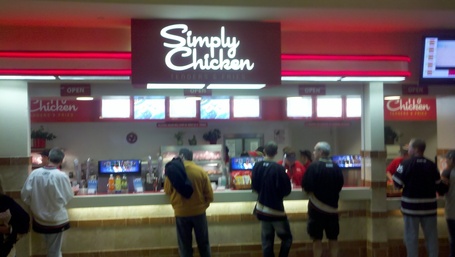 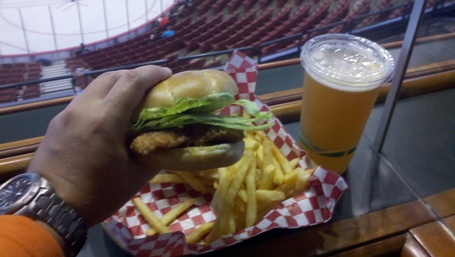 So with sandwich in hand I made my way back up to my seat. A quick stop for a Blue Moon (they didn't have them at the chicken stand, the bastards), and I was situated for my meal. 6:00 - plenty of time to enjoy it. The sandwich, while unremarkable itself, was enjoyable. There was a real tomato slice, some lettuce and a zesty sauce that gave it some zip. It reminded me, in more than one way, of a chicken sandwich from Wendy's. The fries were good, but not spectacular. I'm sure they're the same fries they have elsewhere in the arena.

Would I get it again? Sure. There's worse food to be had. It sat in my gut pretty well for the duration of the game and absorbed a few beers successfully. One glorious home win later, I was off, but not before grabbing a few cookies that were left in the suite by the OC Register. These will make for a pleasant drive home. 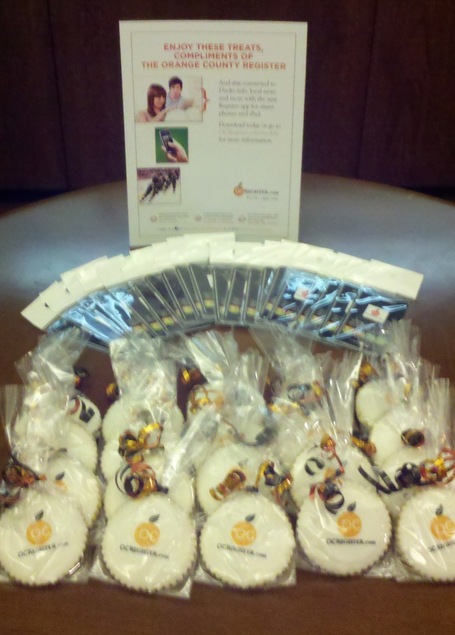 My return on Friday would not prove as fruitful. Both the team and my appetite would leave the Ponda Center feeling let down. Word came from my editor that the remaining untested food conveyance was the now infamous Hot Dog Stop, and their Top Shelf Dog was high on the list of curiosities. I arrived later than I liked, largely due to a girlfriend in tow. She was desirous of the nacho bar, so I gave her a $20 and sent her on her way-- I had a dog to catch.

Up the stairs to the 400 level and there was the Hot Dog Stop right in front of me. It was crowded, but they were about to do the line-ups, so it wasn't a surprise. The teeming masses of the 400 level steeled themselves for gladiatorial combat on ice, with beer and hot dogs consumed in mass quantities before the game so as not to be interrupted during play by a need for more nourishment. Now, I was here. I was one of them. As I approached the counter, a surprisingly perky girl greeted me and asked to take my order. Why was she so cheery? Did she know something I didn't? 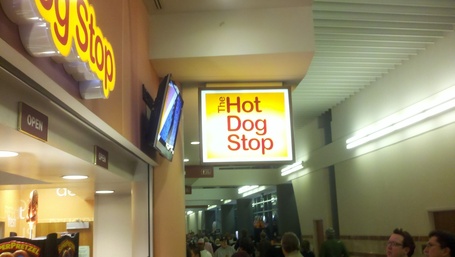 Princess Sunshine: "Ok, sir! Would you like cheese with that?"

Brett: "Good God! Is that an option?"

Princess Sunshine: "Oh, yes! You can choose either shredded cheese or nacho cheese for $1.50 more."

She drove her latex-glove-covered hand deep into a bin of shredded cheese and pulled out a glorious fistful of the stuff. The hot dog was already in a paper basket when she jammed the cheese on top of it. She gave it an affirming pat, like one would tap the ground after burying something shameful, deep in the cold, cold ground.

Princess Sunshine: "Here you go, sir! The condiments are right behind you over by the wall."

Brett: "Thanks, I'll head over there." 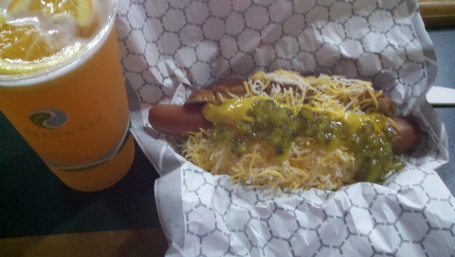 I slathered on some pickle relish and yellow mustard, as that's how I like my dogs and headed back down to my seat, but not before another stop for a Blue Moon. I knew I was going to need something to wash this monster down. The dog itself is an all beef sausage on a soft pretzel bun, a novel concept and something I was legitimately excited to try.

The first bite in, and I was already regretting my decision. The pretzel bun was hard, flavorless and stale. It had such potential, and yet fell so short of its goal. I took another bite, and the whole concoction self destructed. Good thing I had thought ahead and brought a fork. Overall, the Top Shelf Dog was very pedestrian; not spectacular, but still edible. The disappointment was due to the potential for it to be remarkable, an heroic meal for the hockey viewing denizens of Orange County, but in the end, it simply wasn't to be. Maybe on a fresher bun, maybe with less shredded cheese. What is and what will never be. 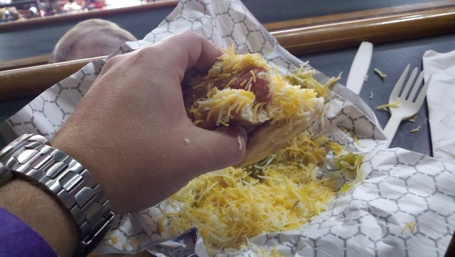