ARTHUR:
We come to the third entry in our Ponda Center Food Review series, where Robby was encouraged to hit for the arena food cycle and came through by eating at the OC Grill in Section 205, Urban Wok in Section 443 and El Jimador Tequila Grill in Section 402 (which shows true dedication because it wasn't even on our list) while refilling on Blue Moon repeatedly along the way. Feel free to ask any questions about Robby's dining experience in the comments.

ROBBY:
When our blog overlord [Editor's Note: Kneeeel before Zod!] commanded us to sample the fare at the new eateries at Ponda Center and report back, I jumped at the chance. As a full-season ticket holder, I typically avoid eating at the games. After all, when you're attending 30+ games a year, it's not economically feasible to pay upwards of $12 a night for food and drink. But I digress.

For our assignment, I immediately claimed the OC Grill. However, over the opening homestand, I ended up trying out a couple other eateries as well: Urban Wok and the El Jimador Cantina. Follow me after the jump to get my takes on the new menus and what I think is the best value item the Ponda Center has to offer.

On Opening Night, my wife and I hit the newly opened OC Grill on the 200 level next to the TV arch at the South Entrance (I think this was one of those Miller Lite gimmicks last year). In addition to your standard ribeye philly cheesesteak, the OC grill also offers a chicken cheesesteak, a couple different sausages, fries, and drinks. 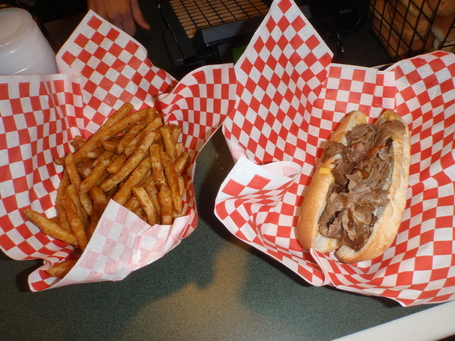 Being a cheesesteak fan, I opted for the beef sandwich without onions and peppers (ok, so I'm a wuss) and my wife went for a similarly garnished chicken cheesesteak. First off, let me say how cool it is that you can even get these sandwiches customized. For the most part, you're at the mercy of the defaults when it comes to stadium food. However, because all of the food is cooked fresh on flat-top grills, you can make special orders if you're so inclined.

The cheesesteaks are served on hoagies brushed with cheese-sauce (this is how they actually do it in Philly), onions, peppers, and shaved chicken or beef. For $25, we managed to get two sandwiches, a monster order of seasoned fries, and a bottle of soda.

Overall, I was satisfied with the meal and the price. While the cheese sauce is somewhat awkward (I'd prefer slices of provolone), the meat tasted good, especially the chicken. The hoagies were a little on the stale side, but the sandwiches were of a decent size, and coupled with the fries, it made for a satisfying meal.

The fries get their own paragraph. They were that damn good. They were well-seasoned (think the seasoned fries that Rally's used to have), and the order size was hefty. They were also crispy, which is not something you can say about most fries you get in a stadium setting.

The next game we attended, my wife went for one of the jalapeno chicken sausages from the OC Grill (if you're sensing a chicken theme, you'd be correct). I tried out the sausage (which was fairly large and served on the same semi-stale hoagies), and we both agreed that it was fairly bland. For being a chicken jalapeno sausage, it had an appropriate level of heat, but it really lacked any great chicken flavor (for anyone who may be skeptical about the quality of a chicken sausage, try one of Aidell's chicken and apple sausages).

While my wife dined at the OC Grill, I decided to try out... 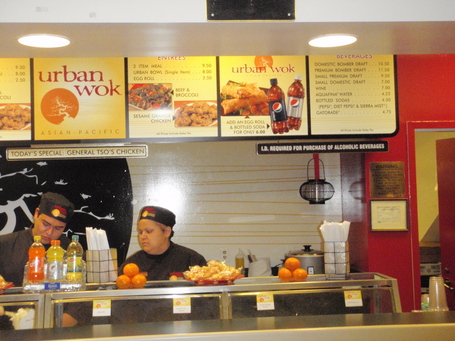 For my blog assignment (since Daniel dropped the ball and I'm an over-achiever that can only justify splurging on Ponda Center food once or twice), I went for a two-item combo with steamed rice, broccoli beef, General Tso's chicken, and an egg roll on the side (it ran $12). While the quantity of food was impressive, the quality was rather pedestrian. In particular, both the broccoli beef and General Tso's chicken were soggy and bland (although the General Tso's chicken did offer an acceptable amount of seasoning). The egg roll was also soggy.

I give Urban Work some points for their efforts in preparing the food. Behind the warming trays, cooks can be seen cooking batches of food. However, somewhere between the cooking and serving process, the food loses its textural appeal. In summary, I think it's a bit over-priced for what it offers, even in a stadium setting, and I sincerely believe that there are better options throughout Ponda Center.

While not a new-this-year establishment, El Jimador Cantina offers a menu item that I was not previously aware of: the $8, half-pound, foot-long, all-beef hot dog. In other words, the best value at Ponda Center. While it's nothing impressive in the taste department, it delivers exactly what you expect: a stadium-quality frank on a laughably prepared bun. However, it will fill you up. And for $8, that's not something you can say about most dining options at Ponda.

El Jimador Cantina is on the 400 level (near 403 I think—on the southeast side of the bowl). You can't miss the black and white vinyl flooring.

Finally, I'd like to touch on the single greatest improvement at Ponda Center this year: Blue Moon is now available in bomber drafts at select locations. While previously you could only get what I would dub crap beer in the 22-ounce size, you can now drop $22 bucks for 44 ounces of belgian-style witbier happiness.