ROBBY:
The Anaheim Ducks held their annual Face-Off Fest on Thursday night, an event designed to get season ticket holders excited about the upcoming season and to thank them for buying into the coming campaign. For those unfamiliar with the event, it basically consists of players set-up all over the facility signing autographs for fans. Attendees also have the ability to skate on the ice, participate in Street Team events, purchase signed merch, and more. 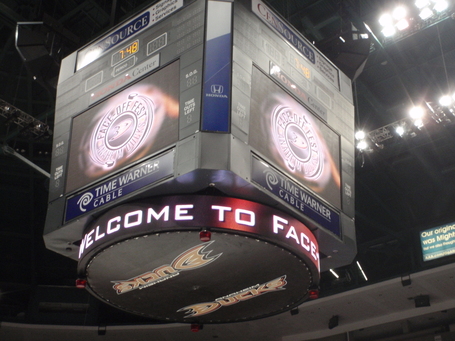 I am not a season ticket holder, and technically shouldn’t have been at Face Off Fest. Yet, the Fates smiled upon me, as Sleek was unable to attend and passed his tickets on to me and my gal pal, Tiffany.

I had zero expectations going into the event. Ok, I had one. I figured it was going to be a highly unorganized cluster of fans trying to get their mitts on Bobby Ryan’s perfectly-coiffed bed head. Luckily for Tiff and me, I was wrong. I have to give it to the Ducks staff, they organized the thing pretty well (in my opinion). We got maps upon entering, listing the location of the players and other goings-on and signage was pretty good. 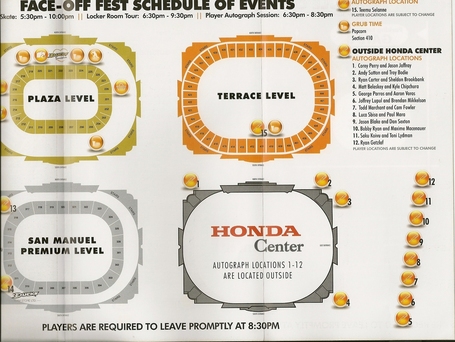 So, Tiffany and I got to the event around 5:00ish which ended up being waaay too early, because most of the good stuff started at 6:30pm. As we walked in, we could could see fans already lining up at booths. People beelined it straight for Bobby Ryan and Ryan Getzlaf’s lines, which were stationed in the parking lot. We didn’t make it up to the 400 level, where Teemu Selanne was holding court, but I was told it was the longest line in the place (think first day of Space Mountain re-opening without Fast Passes) circling the entire floor. 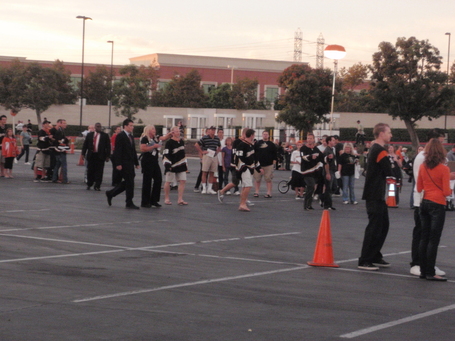 In line for Getzy's autograph or candidates for our new look defense?

We killed time by redeeming our free soda, hot dog (the new "Top Shelf Dog" or as I will be referring to it the "Scotty Weinermayer" – thanks to Sleek), and chips, and then eating in the rink. The Ducks held practice before the public skating started, and a few players were still out on the ice. We plunked ourselves down in the front row and watched Koivu, Sbisa, Fowler, Chipchura, Bodie, and Mikkelson take shots.

For the most part, each star player was assigned a booth with a lesser-known player. The only players alone were Getzlaf and Selanne. Judging by the length of his line (that’s what she said), they probably should have put Ryan alone, too. He was paired with rookie Maxime Macenauer. I think David Duchovny said it best when presenting with Jennifer Lopez in that green dress, "For once in my life, I’m pretty sure, no one is looking at me." Anyhoo, so that no ones feelings were hurt, everyone was forced to get the lesser’s autograph along with getting the stars. 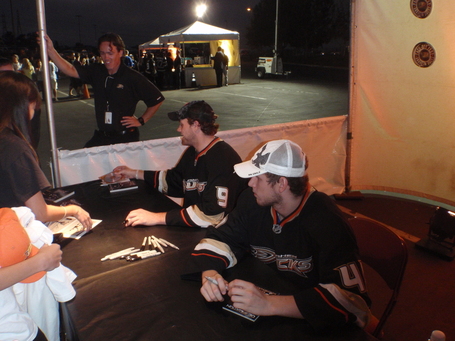 I’m not one that likes to stand in lines. Actually, I hate standing in lines. I will put my merchandise back if a line is too long at a store. My Getzlaf and Ryan jerseys had already been signed by the guys. I didn’t want to have everyone and their mom add their signatures, so I skipped them – yes, I skipped a chance to lock eyes with Getzy. It was humid outside and the line was 230948230498 people deep. I was over it.

I ended up getting my hockey trading cards signed by (Sexy) Saku Koivu and Corey Perry. Like a knucklehead, I didn’t bring anything for everyone else to sign. I was saved because all players were provided with picture tearsheets with their names to sign. Not all the tearsheets had pictures, though. Anyone who hadn’t touched the ice yet in a Ducks uni (like Lydman and Jaffray) got a tearsheet with just their name on it, kinda sad. I made off with the tearsheets of Andy Sutton (surprisingly good looking), Troy Bodie (super cute), Jaffray (looks like a young Mike Modano, and he was in a full leg brace), Lydman (told us he skated that day before The OC Register broke the story), Josh Green (totally forgot he was on the team), Jonas Hiller (hair had been trimmed, but still pretty long), Curtis McElhinney (actually cute), and Lubomir Visnovsky (very very attractive man, looks kinda like Liam Neeson). 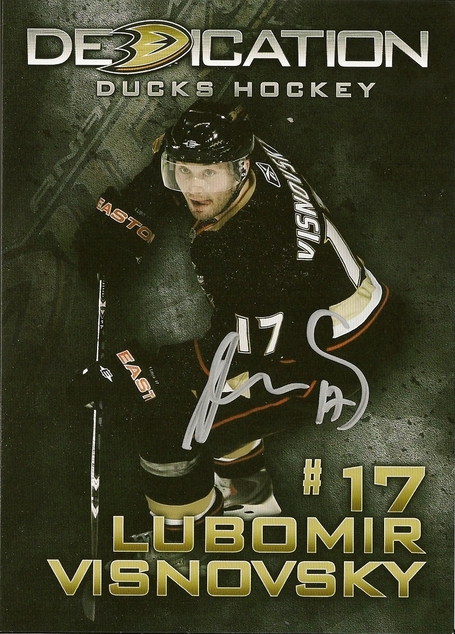 Somehow, Hiller, McElhinney, Visnovsky, and Green lucked out and were stationed inside Ponda Center, right outside the Jack Daniel’s Club on the 300 level. Inside Jack Daniel’s were the coaches, broadcasters and front-office staff. I was able to make Coach Carlyle laugh when I told him a random story about my parents meeting him when he played in Pittsburgh. I gave a quick fist-bump to Ducks’ blogger Adam Brady as he tried to convince me to record a spot for an opening night video. Normally, I would jump at the chance, but I am recovering from a wicked chest cold. That night, I sounded like a tranny. My voice was deep-ish and raspy. As Phoebe from Friends called it, I had "sexy phlegm."

One of the highlights of the night was meeting up with fellow AC blogger Robby and his lovely (and very pregnant) wife, Rebecca. We even benefitted from Rebecca’s pregnancy by getting to ride in the elevators instead of climbing stairs. Tiffany and I tagged along with them for most of the autographs I mentioned above. One big difference was Bobby. As we all know, Robby has a huuuuge man-crush on BR. I was not in line with them when they met Bobby, but I did get to watch it from afar. I thought I saw a tear in Robby’s eye afterward…hehe. Oh! The best quote of the night comes from Robby. After meeting Visnobsky, Robby kept saying, "Lubo is a very attractive man. I didn’t know that." It was HILARIOUS. 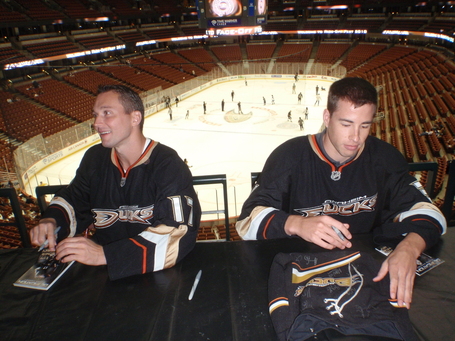 Anyways, we had a great time with our new friends. We finished up our day with a tour of the locker room. It’s a lot smaller than I thought it was (that’s what she said…again!). It smelled, too. Even without all the sweaty guys there and clean equipment, it stunk like, well, a locker room. After taking that tour, I now realize that when I filmed DTV I was just a few feet away from the locker room the whole time. How different my experience would have been that night, had I known then what I know now… 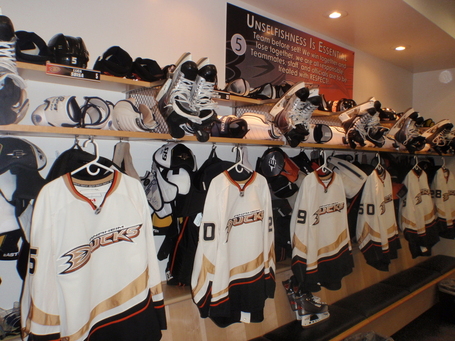 Let me start off by saying everything Jen says above is true . . . except for the bit about me tearing up meeting Bobby. It was an all-out sob.

As someone who comes from the world of baseball, I was really curious to see how the Ducks' Fan-Fest would stack up to the Padres' Friar Fest. I can now say without a doubt that the Ducks are doing it right.

When my wife and I arrived, we instantly figured out where Bobby would be signing and headed straight to his line. After leaving my pregnant wife in the Bobby queue (you wouldn't believe the grief I got from Jen throughout the night about this topic), I returned with food for the both of us. After a quick look around, my wife decided that she would move to the Sbisa/Mara line since a) it was empty and b) there was a curb she could sit on. As the minutes slowly ticked away, the players finally came out and my wife had a great conversation with Luca (whom we both adore) about our trip to Vancouver. 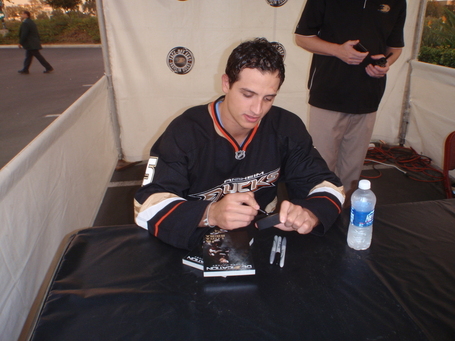 After getting Sbisa's/Mara's signatures, Rebecca headed back over and we slowly inched forward to meet Bobby and Maxime. To my great surprise (and perhaps regret in foresight), I spent more time talking to Maxime instead of Bobby. As you might expect, EVERYBODY wanted to take pictures with Bobby and talk to him. Even though Maxime was taking it like a champ, you could tell he was bored. I decided to to take a shot in the dark (real risky with a name of Maxime, I know) and ask Maxime if he was Quebecois. Something in the way I asked the question must have piqued his attention, as he immediately perked up and asked me if I spoke French.

We proceeded to talk, in some odd French/English bastardization (Maxime's English is heavily accented) about the difference between Montreal and Quebec City and the reason why I miss Canada so much. I have to say that even though I possibly blew my chance to ask Bobby something interesting (I said something trite about being glad he'd be here for a while, the same thing he probably heard 739 times over the course of the night), I was really glad to talk to Maxime. He's a good guy, and I feel bad that he was probably so ignored all night.

After having Bobby sign our Vancouver puck and Olympic medalist picture, we jumped in line with Jen and Tiffany (yes, we cut; we're horrible people) who were waiting to meet Koivu and Lydman. As Jen points out, Toni gave us the scoop about skating earlier that day, and he said that while they still hadn't figured out the cause of his double-vision, though they had ruled out all serious, potential casues. He speculated that it might have been migraine-related. 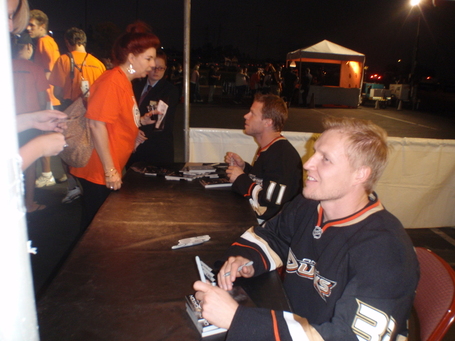 We then headed upstairs to get autographs from Hiller/Green and Visnovsky/McElhinney. Jonas was gracious enough to sign both our Vancouver puck and my wife's Jonas Olympic tee-shirt (that she was wearing) and Lubo really is an uncommonly attractive dude. One of the coolest moments of the night was meeting Randy Carlyle, who was chilling in the Old No. 7 Club. Even though he was deep in conversation with other people, he disengaged when he saw my wife and myself and eagerly posed for pictures with us. This exchange ensued:

Robby: So, how do you feel about the three scoring lines?

Coach: Ask me after the picture.

We all laughed nervously (I died a little inside), but after we were done with the picture, Coach Carlyle thanked us for supporting the team. I want to repeat that. An NHL coach thanked my wife and me, two random fans, for supporting the team. You just don't get that in any other sport, and I really felt it was an incredibly cool thing for him to do. He didn't have to do that, but I'll never forget that he did.

After leaving the Old No. 7 Club, we visited the new boutique store on the Club level. This store, which features unique merchandise that you cannot find anywhere else, is a new feature that I'm assuming is meant to be an added perk for Club level season ticket holders. After spending more than I'd like to admit, we headed downstairs for the locker room tour.

The first thing that struck me about the locker room is that it's significantly smaller than you'd expect. That said, it was just awesome seeing all of the equipment laid-out in each stall. It was also really cool to see the goalie helmets up close. 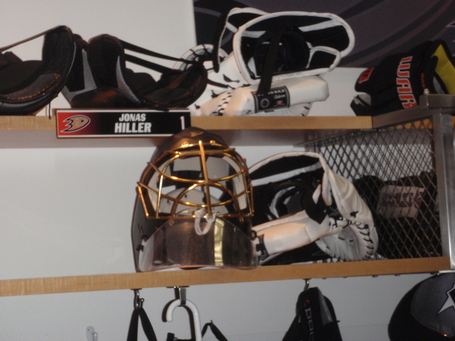 We parted ways with Jen and we continued outdoors. We got Perry's autograph (diplomatically, I'm just going to say that he was less than excited to be there), took some pictures on the zamboni, and my wife got in line for a Kid's Club package. In the interest of killing some time (Ok, so I really wanted to try it), I decided to strap on some pads and let members of the Ducks street team shoot some pucks at me. It's way the hell harder than you'd think to stop a puck. 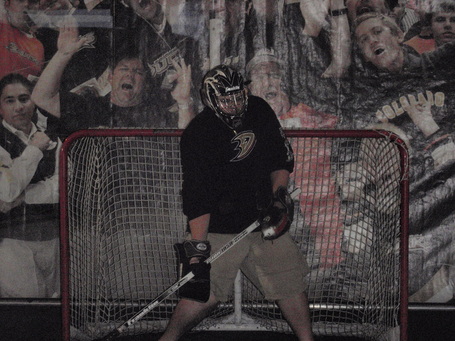 Thus ended Face-Off Fest. All in all, it was a fantastic night, and I really recommend you attend next year if you get the chance.

Did any of you attend Face-Off Fest? Share your thoughts below.