Your Enemy: Jewels From The Crown

"We’ve decided to hold off and re-evaluate the process. We want to make sure we’re providing the best experience for the fans."

I noted some complaints, here and elsewhere, about the last webcast, and it seems so did Fox. For the record, the Jumbotron video accompanied by audio playing out of a Soundblaster 1.0 in a Junior High A/V club computer was fine with me. No, seriously, it was. You know why? Because this was a "no soup for you!" situation, as evidenced by tonight's lack of webcast. We're not entitled to anything as fans of an under-marketed sport in America, but Fox is absolutely entitled to issue a statement that makes it sound like they actually care about their hockey coverage.

The Ducks' Internet ad for the NHL's "Questions Will Become Answers" campaign are threefold: Where does Top Pick Fowler fit in? Will Ryan score 40 goals? Will Perry lead the team in scoring again?

Questions will become answers. Uhhh, yeah, I guess that's the same as having a player working out in a national TV commercial with the sports talk radio pinheads doubting him in the voiceover. And I don't know who wrote the questions for the Ducks, but it certainly sounds like an NHL-intern with a stat sheet and only a vague understanding of the fact that Anaheim has a hockey team.

But tonight is the game before the first game, and there are questions going into the seaosn. Still, I have only one note: Growth. Randy Carlyle expressed the idea to the OC Register's Eric Stephens in discussing why Bobby Ryan was pulled from his duties as a center. The youngster no longer exhibited any growth or improvement at the position according to Carlyle. By contrast, Cam Fowler has likely punched his ticket to a hometown NHL debut at the Joe Louis Arena in Michigan by steadily improving and growing in his Top 4 role.

Simple standard, no? I think we should apply the same standard to Carlyle. That's not to say that we're in a position to apply standards to the coach or that coaching is a job whose results are not completely controlled by intervening actors, but in the interest of keeping our snark and blood pressure down, let's focus on growth.

This is Carlyle's second season as a Ducks coach with a question-mark defense but first season without Scott Niedermayer. Will he stumble out of the gate? Of course he will. I would, you would, Larry Robinson did and Scotty Bowman himself probably would have, too. What we're looking for here is growth, though. He may NEVER find a way to get the most out of his lineup, but is he getting more out of them in November than he did in October?

Don't get me wrong. I'm hoping for the best, but I'm not calling for anyone's head if I don't see it. Not if there's growth.

Quick plugs. If you missed the Ducks Live season preview on PRIME TICKET, it airs again today at 4:30. Also, a great post from Robby and Jen covering last Thursday's Faceoff Fest will go up after the recap thread tonight.

And finally, if tonight's thread is a ghost town and you're looking for another place to play, Sleek still has his two-game gameday thread up at Battle of California. Honestly, the Orca The Hut cartoon is not to be missed. Also, in Sleek-related news, Jen and I will have the pleasure, by gracious invitation, of joining our good friend Earl for the Row B experience at tonight's game. For the uninitiated, Earl Sleek sits here: 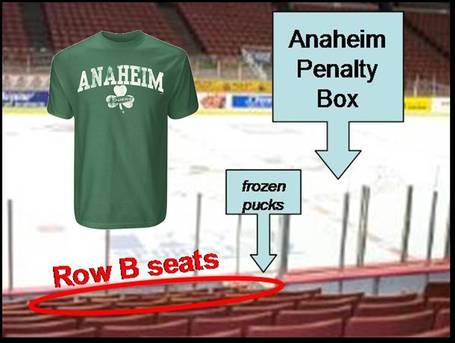 Yeah, that's awesome. It will be as close as I've ever sat at the Pond, and if the Ducks take penalties (haha, and if the ice is cold? haha), then I'm hoping to hear a little penalty box chatter. BIG public thank you to Sleek!

...whew, it was tough to get out; those seats are just too awesome.