ROBBY:
As some of you may have heard, my wife and I will be welcoming our first child somewhere in the next few days. As of this writing, it’s still not quite real. I mean, sure, we finished his room the other day. We’ve done the baby showers. We have a name picked out, and I know how the car seat works. 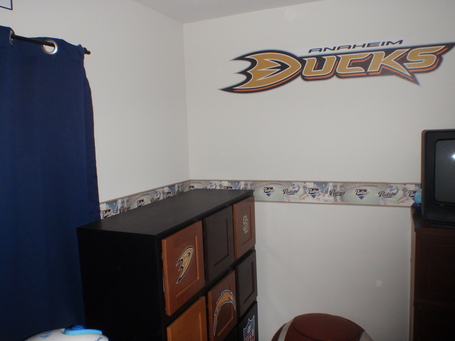 The switch just hasn’t been flipped yet. When Rebecca and I were first trying, I read all the baby books, and I remember thinking, "Yeah, yeah. It will be real as soon I see that second line." Thirty-eight weeks later, I still can’t get my head around this. Even as I flinch at every text message and hold my breath on every gasp from my wife, it still seems like a gauze-wrapped world that’s happening to some other version of me in a different life.

So I look to the things in front of me to get me grounded. There’s the obvious stuff like the endless wailing, the late-night diaper changing, and the constant wondering about whether or not I’ll be a capable or (with any luck) good father. But there are also the things I’m really excited about. And perhaps more than anything, I can’t wait to raise him as a hockey fan.

In the grand scheme of things, I'm a relatively new hockey fan. After discovering the sport in February 2009, I've instantly, hopelessly, and vehemently fallen in love with our quirky little sport. Even though I was raised as a baseball and, to a lesser extent, football fan, hockey was sort of my own true love. It was something that my wife and I found together and it's something that's uniquely ours. Don't get me wrong: Trevor is going to be a baseball and football fan. But there's something satisfying and exhilarating about being able to share something with him that I didn't pick-up from my parents.

Sports are a huge thing in my family. It's pretty much the only thing that my dad and I can agree about. It's our way of bonding and sharing an experience that we otherwise would bicker about. After all, when it comes down to just about anything else, we struggle to find a common ground. While I hope that my experience with my son will be different, I can't discount that such a fear is very real and omnipresent in my mind.

That he'll be raised on hockey has never been in doubt. After all, he's named in-part after Bobby Ryan. His nursery features a Ducks logo that spans more than three feet. He's already got the coolest teddy bear in the history of man (seriously Jen, thank you so much for this) and our usher at Honda Center can't wait to meet him (we already have a baby jersey for him). He really has no choice but to love hockey. 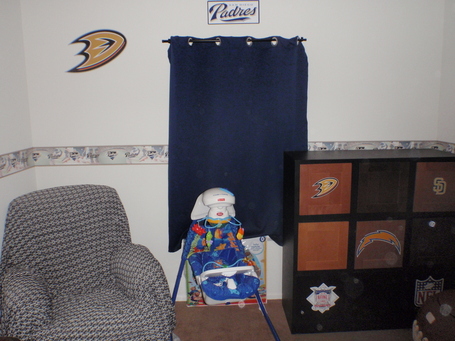 And yet, for us, hockey will be about more than what we do three nights a week from October to April (more often than not, this hopefully extends to May and even June). It will be something that marks him as my son. I can't tell you the conversations I've had with Rebecca about putting a cement pad in the backyard so he can practice skating and shooting. I've already begun researching possible hockey programs in the area (and if you know of any, please let me know) and I gleefully tell my friends that I'll be making the long drive at 5 a.m. to sit in an empty rink in Riverside. Hockey is something we'll share that he can't say he learned from anyone else. As satisfying as it must have been to watch me begin to "get" baseball, I can only imagine how proud I'll be the first time Trevor complains about an un-called Hooking penalty.

Even though I'm not quite yet a parent, I can sense that these are the things that matter-- the memories and experiences that will always be ours. Even if we drift apart and we adopt diametrically opposed political and metaphysical positions, we'll always have that chill that greets you when you first enter a rink. We'll always have the anguish of hearing the clang of iron echo through an arena when a point shot catches a post. And we'll always share the unbridled, explosive joy of a game-winning goal in the dying seconds of a game, even if it's in November.

And that's how I cope with the chaos. Amidst the uncertainty and the inability to control the situation, there's the giddiness I feel about taking him to Ponda for the first time. There's the anxiety about watching him take his first big hit on the ice and there's the anticipation of watching him pot his first goal. The first time Trevor complains about an Interference call, I won't be able to hold back my grin.