ARTHUR:
I think it was the second or third time that they showed Cam Fowler's Draft day interview on TV with my ugly mug jamming my Edirol-R09 in his face that I realized I was there for that moment. I mean, I know I was there-- I didn't cover the Draft on qualudes or anything. But you don't think of these things in the moment. When I shook Scott Niedermayer's hand, I checked my recorder and went right into the question, "Are you here in an official capacity today?" And sure, I camped out for Fowler's interview booth, but I stood there checking my recorder and checking my notes for questions. I was in the front of the press scrum, but I didn't really process the experience. I was just trying to make sure I got my quotes and my audio.

With the Panthers coming to town, there seems to be a call for Draft day nostalgia. But I have to say that no one in the media riser really gasped at Florida selecting Gubrandson. He was a suitable third overall. He did make Fowler the presumptive fourth overall pick, however, and there was an audible gasp throughout the media riser when the Blue Jackets said the words "RYAN JOHANSEN." Some people began inhaling on the word "PORTLAND." And then I remember J.P. from Japers' Rink leaned over and declared, "It's about to get interesting." 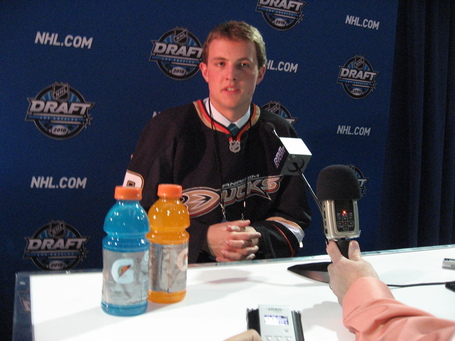 Really, dude? Newell Brown question? You're a blogger, aren't you?

And that was the story of how Fowler fell, or fell to 10th at least. The 5-9 teams wanted forwards, more than a few were probably hoping to get Johansen. Maybe a few were married to their preferences, maybe some ruled Fowler out and hadn't done enough homework to feel comfortable picking him over "their guy." Whatever the reason, you can't prescribe 'best player available' drafting for every organization.

Really, the Rangers were the only team that passed on Fowler in favor of another defenseman, but by virtue of doing that, they changed the story on why the young blueliner fell down the draft board in the first place. Suddenly, everyone had their theories on Cam's freefall. Leading up to the Draft, you might have heard someone say that Gubrandson's size and grit would get him picked ahead of Fowler, but with the selection of McIlrath, some folks around me were theorizing that Fowler was actually outright soft. Of course, the most common observation was that none of these people had anything to say UNTIL the Rangers passed on him.

The topic dominated the chatter in the press scrum before Fowler got there, and really, it bled into the first few questions of his interview. He was the story of the Draft at that point, as evidenced by the 15 minutes they gave us to stand there and fire away at him. It was a big moment with a crowd of people asking him why he'd just been rejected by a half a dozen teams. He stayed calm and fielded the firing squad. Poise.