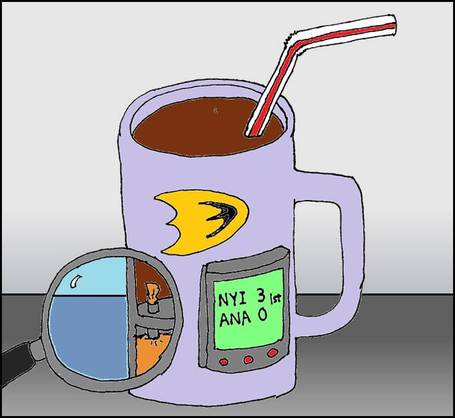 ARTHUR:
In honor of Festivus the holidays, Anaheim Calling is doing an office Secret Santa.  In theory, we tracked down some Ducks merchandise to give each other that may be relevant for you and yours in the gift-giving season.  In practice, we made s*** up and will spend the next few days teasing each other.  Enjoy.

First up, Ducks blogfather Earl Sleek, who got me.  (You guessed it: rigged).

EARL:
For Arthur, I decided to go a bit off-the-board, as I'm giving him a product that doesn't yet exist. But in the spirit of Christmas, perhaps this post can inspire some inventor to get it made. :)

I call it the "Anaheim Ducks Misery Cup," and it's essentially a cup with two chambers. You fill the top chamber with Coca-Cola and the bottom chamber with Jack Daniels. Attached to the cup is an electronic real-time scoreboard tracker, which is tuned in exclusively to Ducks games. Every time the Ducks surrender a goal, the cup automatically dispenses some Jack into your Coke.

Simple, right? The cup is customizable, and comes with several built in features:

- If you're brave, you can use "shots on goal allowed" instead of "goals allowed" -- the amount of liquor released is lessened, of course, but in the end you'll get much more drunk.

- At five goals-allowed the cup empties its liquor reservoir, no matter how much is left.

- There is a "positivity" setting where you can dispense Jack Daniels only when the Ducks score, but your liquor might grow stale in that bottom compartment.

- Of course, there are limits to what frustrations can be captured through an electronic scoreboard, so there's a manual liquor release button if needed. Like if you're angry whenever Andreas Lilja is a scratch.

- Let's pretend it's dishwasher safe, too.

Anyways, Merry Christmas, Arthur.  May your 2011 be a Ducky one.