DANIEL:
I was really struggling with what to get Robby for Christmas. I wanted to get him a Bobby Ryan Ken Doll with gold chains, but then I remembered that Jen had already fulfilled that fantasy for him. I was going to steal a stick from his stall when I was in the locker room for Fanfest, but I figured his wife would hate me for ruining any possibility of being the inside spoon.

Then I realized that one day Robby's dream will come true and he WILL meet Bobby Ryan. As a fellow Anaheim Calling contributor, I knew I had to do my best to prepare him to converse with his favorite Duck. That's when I found this placard for him to hang from his door, so he can practice everyday: 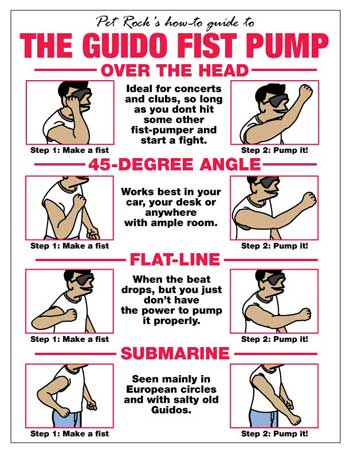 First, I didn't know that there were so many different ways for the Jersey Shore kids to communicate. It blew my mind. This also explains why Bobby has trouble telling people where his passes are going. It's because both his hands are attached to his stick, rendering him mute.

Second, the variety means Robby will have to practice daily, but I have confidence in his commitment to stalk randomly bump into Bobby Ryan and get full value out of this gift. I fully expect a picture of Bobby Ryan at Trevor's first birthday. I'm glad to help Robby accomplish his goals, and I hope this inspires him to never quit on his dreams.

Glad you came to our blog, Robby.