Where To Sit At Ponda Center

Share All sharing options for: Where To Sit At Ponda Center

As Arthur mentioned during my original post a few weeks ago, the majority of my contributions (at least in the beginning) will focus on off-the-ice Ducks issues. I was going to work on Part 2 of my jersey piece, but my wife and I recently heard from our ticket representative that the seat upgrade event for season ticket holders will take place Sunday, June 21st. In this piece, I thought I would tell you about my viewing experience as a Ducks fan and find out what you guys think about live hockey viewing.

For those of you that don't know, these upgrade events allow season ticket holders to take turns at selecting better seats that meet the criteria of their season ticket package plan. Fans are allowed, in order of their tenure, to wander around the arena and select tags off seats that are designated as available.

Since last year was our first year as Ducks season ticket holders, our seats aren't so good. We're limited in one sense by the buy two, get two free promotion which allows fans to get four season tickets for the price of two in selected areas throughout the venue. For the 2009-2010 campaign, we ended up in Section 409, Row S, seats 1 - 4. This gave us an aisle seat on the goal end of our section that was only three rows from the roof of the arena. 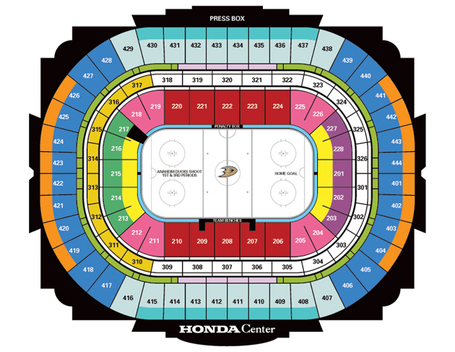 Personally, I like to be on the aisles (I'm not morbidly obese, but I am a big guy) and I hate the stupid cup holders (Worst. Idea. Ever.). Section 409 was great in the sense that I could quickly scamper out to hit the bathrooms during breaks and Oggis and Rubios were both close to our seats. I prefer to sit center-ice, and we can't really afford the lower seats. But ideally, we'd be able to move over a section or two (or even to the other side of our section) and down a few rows, but it just depends on aisle availability.

I have been able to sit about eight rows back from the ice behind one of the goals, and let me say, it completely changes the game. Having only ever watched games from near the roof, I was completely stunned by how fast the game moves when you're that much closer. It certainly made me appreciate the work that goalies do.

So, given that we're going to be able to upgrade this year, I thought I would see what the AC community thought about seats for hockey. Where do you guys like to sit to watch a game? What's the most important factor for enjoying the game from your seats? What are the best seats you've ever had and did they change the way you viewed the game?