What's in a Third Jersey - The Sequel

Share All sharing options for: What's in a Third Jersey - The Sequel

Months ago in my audition here at Anaheim Calling, I wrote a post about the trend of third jerseys in the league on the heels of news that Reebok had confirmed the production of a third jersey for Anaheim. Today, the Ducks officially confirmed to the OC Register that they will indeed be sporting a third jersey for the 2010-2011 campaign, although details are scarce.

Chief Marketing Officer Bob Watson told OCR that the Ducks will unveil these third jerseys sometime during the season and that they were created with input from the players and the coaching staff. Wagner also threw in the following juicy morsel that seems to hint at what direction the team may be heading with it's third jersey:

"I think the fans will really embrace it based on the fact that there is meaning to it."

Given these recent announcements, I figured it might be a good idea to begin the rampant speculation about what a third jersey for the Ducks might entail.

In comments from my first post, many of us expressed a desire for the Ducks to go with a retro approach for this third jersey, but I didn't think that the Ducks had enough history to make such a move. However, Watson's comment could certainly be interpreted to suggest that the Ducks may indeed explore a trip back to their Mighty days. If the Ducks were to go with a throwback, which of the jerseys would they pick? 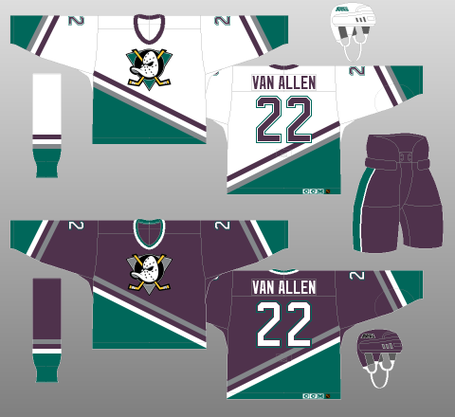 Even with Watson's comment, I think there's a chance we might see some integration of the old with the new instead of an outright throwback. It wouldn't surprise me at all to see the Wildwing logo show up with some iteration of the black and gold, as shown below (this image was created by 33hooligan on the Ducks' Official Message Board):

So what say you Anaheim Calling? What do you think the third jersey will look like? You can poach samples existing on the Web (again, the Official Ducks Message Board has many threads dedicated to the subject). Or, for the truly creative and enterprising among us, use the Custom Jersey Builder from the Sporting Store to create your own ideas and paste them for the community to see. If I get the chance to explore the Jersey Builder, I'll try to throw together something for you all to critique. For now, this is still my favorite idea I've seen on the Intertubes: 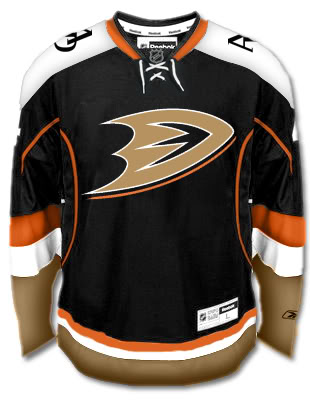