The leading scorer at this year's Camp, Nic Kerdiles potted 12 goals and 5 assists in his four games with Team Orange, including two gamewinners and one in overtime.  When he wasn't finding the back of the net, he was using his 6'1" 189 lb. frame to staple the opposition to the boards.

"I like to say I'm a power forward," Kerdiles says while describing his game.  "I love hitting guys, and I think I have some skill to make some fancy moves and just drive the net.  [My game]'s between a gritty and fancy kind of play, but more of a power forward.  I'm a bigger guy, and I like to throw the body."

Hailing from Irvine and captain of his LA Selects team since 2006, Kerdiles' mixture of fancy and gritty is purely California-grown.

"I'm originally from Lewisville, Texas," he notes.  "Thats' where I was born, but I lived only four years there.  Then I went to France, because my family's all French.  We're the only Kerdileses that live in the United States.  So, I go back [to France] every summer, but I've been living in California for 11 years now.  I grew up playing hockey here.  I started roller hockey at what used to be called Gretzky's Roller Rink in Irvine." 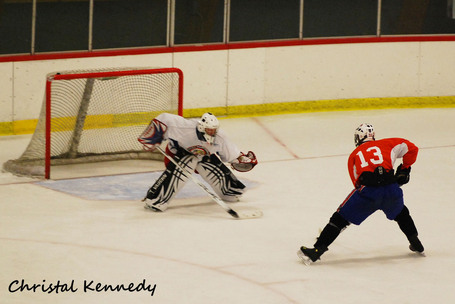 The 16 year-old has gotten plenty of attention lately, and deservedly so.  Drafted by the Kelowna Rockets last year, he was named Team MVP of the WHL US Prospects Camp.  His play of late has also earned him a spot in the National Team Development Program.  But the attention he valued the most, that of a Division I College program, he received while participating in two of the previous Ducks West Coast Prospects Camps.

"I think [the Camp] is a great opportunity to get looked at," says Kerdiles.  "I think this is where [University of Wisconsin Head Coach] Mike Eaves first saw me.  It's hard for colleges to see you during the season, so this is a great place to just get noticed."

After talking to a number of schools, including Michigan and Denver, Kerdiles decided on Wisconsin, but he emphasizes that he never seriously considered the WHL.

"Honestly, my education is really important to me.  And you never know.  It just takes one bad hit, and your career is done.  And you need something to fall back on.  [If you play NCAA hockey], you can get your college paid for, and that's awesome. So, it never really crossed my mind to go to the WHL."

With two years at the National Development Program in front of him and then Wisconsin after that, Kerdiles didn't come to this year's Camp to be scouted.  In his words, he was just looking for some "good ice" before leaving for Ann Arbor.  He found good ice, as well as some good and physically competitive games.  And in true power forward style, Kerdiles answered any time someone rang his bell.

He was shoved into a post, knocked hard against the boards and even cross checked in the head.  Yet, each time he came back to score.  The cross check resulted in a penalty shot, and Kerdiles made the most of it, knotting what may have been the prettiest goal of the Camp as he stopped on a dime inside the crease and backhanded the puck over the goaltender.  By Sunday morning, he had made it clear that if you line him up on the end boards, he'll line you up on the scoreboard.

"I don't like to get pushed around," Kerdiles says with a smile, "So that just gives me a little bit more momentum to go after and score. I can just laugh at him and just be like, 'I scored, whatever,' and just go back to the bench and celebrate."

For now, Kerdiles is focused on the NTDP, but on the horizon, he's excited about Wisconsin, the coaching staff, the facilities, the rivalries, the fans.   He chose the school because he said he could see himself there, that he just felt like he was going to be there one day.  As a player that was trying to find a college that would give him that 'gut feeling,' you could say Kerdiles got what he wanted out of the Ducks West Coast Prospects Camp, but by coming back this year and raising the level of competition for everyone involved, you could also say he gave a little back.