Tyler Moy's seven goals led all '95 players at this year's Camp, his twelve points were tied for second in overall scoring, and honestly, with how much offense he was creating, he could've had a lot more.  A confident stickhandler and goal-scorer, Moy also displays incredible vision and passing ability.  He creates space for his teammates, and he can find them, whether he's working the puck down low or carrying it on the rush.

"I try and make others look good, too," Moy says of his game, "I carry the puck when I have to. I carry the puck, and I look for options. I don't think of it as me versus one player on their team. I think of it as us, as a team, against their players. I play more of a team game rather than try to do it by myself."

A native of Scripps Ranch and son of veteran coach Randy Moy, who was on the staff of California's last Division I hockey program at USIU, Tyler is a San Diego product, through and through.

"I've played in San Diego, basically my whole life," says Moy.  "I started playing in-house in [San Diego Ice Arena], and we had a tournament team up until around Squirts, and then I moved to the San Diego Junior Gulls."

Moy has gotten plenty of attention, from the USA Hockey National Player Development Camp (which he will attend again this summer) to Junior A to the WHL, but as a '95 player, Moy coming to the Ducks West Coast Prospects Camp this year was more about creating new options, rather than making decisions.

"It's great," Moy says of the Camp, "[The] educational [aspect], as well as on the ice.  It's giving me a good overview of what College Hockey's about from that [College Hockey Inc.] presentation.  I'm not limiting my options at all.  I'm looking at all the options so far, so I'll be able to choose the best one."

Still, as the options pile up, the time to make a decision on the next level seems to be dwindling.  Moy's family previously considered leaving San Diego, even if only for LA, but ultimately decided not to move away.

"That was tough," Tyler's father, Randy, recalls of the decision to stay home. "Tyler's at the age now where one should start considering moving or driving an hour and a half one way to go to practice three to four times a week . . . But in our opinion, and like they said in the USA [Hockey] Collegiate Summit, 'bloom where you're planted.'  So there's no need for parents to be travelling all over the place to play higher levels of hockey. You can if you want to.  If you want to go to special tournaments, if you want the status, you want the enjoyment and the fun to do that and to spend the money to do that, you certainly can. But do you need to for development? Absolutely not. You do not need to, and Tyler is one of a bunch of kids that are examples of that." 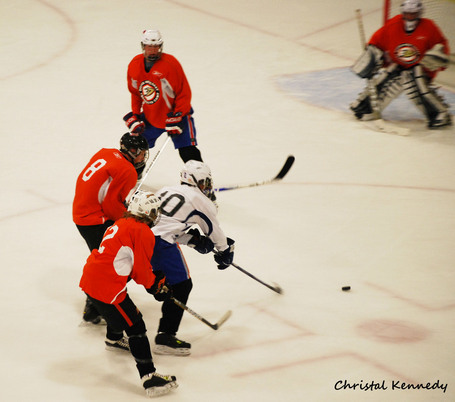 Ultimately, though, the decision to move on for the sake of the next level is unavoidable, and that makes the options that Tyler finds at this year's Camp all the more valuable.

"Now, we're really at the point where he'll probably have to move at some point.  Either he'll move or we'll move," Randy says.  "Hopefully, if he continues to work hard, which I think he will, and continues to progress as a player, [then maybe] he would not play 16AAA next year, and maybe he'd play 18AAA.  And I know the NTDP is looking at him as well.  That would be the ideal goal, to play there, or possibly the USHL or NAHL. [We're] not really sure yet, but it probably won't be in San Diego I would guess."

And while Tyler leaving home may be tough for the Moy family, it's hard to imagine it would disagree with Tyler, the player.  As a San Diego kid at this year's Camp, he knew maybe two or three of his teammates, but by his second game, he was extremely vocal on the ice and talking to players on the way back to the locker room.  He plays a "team game" in the truest sense, and leaving the Pacific won't make him a fish out of water.