ARTHUR:
On the ice, he seems like any other kid who's well on his way to the next level.  A complete player, he is just as capable of throwing the big hit as sniping the puck past the goaltender, as adept at maintaining body position on his check as finding his teammate with a crisp and accurate pass.  And perhaps it says the most about Frasier Haber that his game on the ice offers no indication of the adversity he's faced in the past year.

"It was the beginning of last season, our first Midwest League showcase in Detroit.  During one of my games, I had the puck along the boards, and a kid who was about 6'5" came at me, left his feet, lead with his elbow, and it was a combination of his elbow and his knee that hit my head.  My head smacked against the boards, and I don't remember anything after that. I don't remember the whole weekend, pretty much," Haber says of the injury that left him with a Grade 4 concussion, ligament damage in his neck and two dislocated vertebrae.  "I was in a neck brace for a month; I couldn't do anything."

The Redondo Beach native would ultimately spend eight weeks on the shelf, and though he gradually made his way back to the ice, an open ice hit in Wisconsin would end his season for good.

"My head hit the ice," recalls Haber, "And I was diagnosed with a grade one concussion, which is minor.  But after the first [concussion], I saw the best doctor in the world, Doctor Robert Bray-- he's president and CEO of D.I.S.C. Medical Group --and [after the second concussion] he advised me to take the rest of the season off, because if I got another one that season, I could get brain damage, because it was my second within three months.  So I took his advice, and I took the rest of the season off." 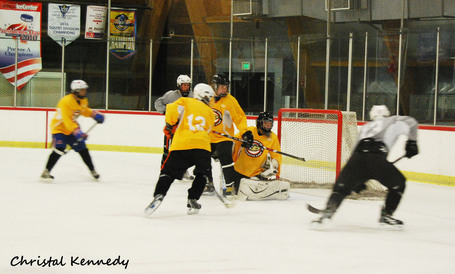 Haber generally credits the staff at D.I.S.C. with his successful rehabilitation as he worked his way back from the two concussions.  He now trains with professional athletes and boasts a muscular 5'6" 170 pound frame.  But after missing last season, he was looking to a stack of camp invitations this summer as his opportunity to showcase himself again and prove he had conquered the adversity he had faced on the ice.  Unfortunately, it was the lingering adversity he faces off the ice that made that prospect difficult.

"Last year, my dad was diagnosed with Stage 4 Lymphoma, and it took a lot out of our family," says Haber.  "My dad was doing chemo treatments every couple of weeks, and it really put a strain on our family, mentally and financially. My dad hasn't worked in probably 6 or 7 years, becuase he's also had five back surgeries.  And it's just, the past couple years have been tough for my family.  And we had to have my grandma move in to help with finances.  My mom's the only one working right now, so things are really tight."

Haber's father knew that he couldn't afford to send Frasier to many of the camps that he was invited to, but he also knew that the Ducks West Coast Prospects Camp considers waiving its registration fee for hardship cases in order to give back to the community and to make sure that the best players, regardless of financial situation, make it to the ice for the scouts to see.  Newell Brown, the founder of the Camp, was happy to grant the waiver.

"For us, it's part of what we want to do here," Brown explains.  "If a kid is having some problems with his family, where financially they can't attend the Camp, then that's where we give scholarships to players, in hardship cases like that.  And that's how we want to help the hockey community out here, so that kids can get involved and get the exposure that they need. And [Haber]'s an example of a kid who really deserves to be here, otherwise he wouldn't be."

Brown had faith in what Haber could bring to the Camp, and Haber didn't disappoint.  He played with the most edge of any prospect on the ice, but he was also tied for second overall in scoring, putting him in the middle of a scrum about as often as a goal celebration.

"He's a ball of fire out there." Brown says of Haber.  "He's a compact kid. First shift I saw him play, I had to look at my notes, because he hit about three guys, used his speed wide and got a really good shot on goal. He plays with a lot of passion."

Haber didn't take a single shift off, and he was hoping to impress one of the six Division I coaches that came to Camp this year, particularly Coach Gwozdecky of Denver, Haber's favorite college team.  His showing at this Camp and any camp he attends this summer is so important, because with his family's financial situation, he still doesn't know where he'll be next year.

"I signed with the LA Selects 18AAA, but the cost of the season is far beyond what [my family] can handle," Haber says regretfully.  "So I'm not really sure [where I'll play] yet."

Newell Brown, for one, would like to see Haber find a slot with one of the programs represented at the Camp this year.

"Let's hope that a few of the scouts here have noticed him more than they have in the past," says Brown.  "And he moves up a little bit higher on their recruiting charts and has more opportunities in the future. That's what we're all about."

Indeed.  The Ducks West Coast Prospects Camp is about doing everything it can to reduce the adversity that Southern California hockey players face in reaching the next level, and they weren't about to turn a talented player like Frasier Haber away for the price of a registration fee.