First, just to give some link love to the great scouting reports collected around SB Nation, please visit Blueshirt Banter for some good scouting report links on Fowler.

He didn't fall by himself-- the Rangers passed on both Fowler and Gormley to select McIlrath at 10th --but he did fall from where many people expected he'd be selected. By all accounts, the Ducks weren't necessarily looking for a defenseman, but Fowler is a premier smooth-skating offensive-defenseman, a player who was so good that he made the Taylor/Tyler discussion the Big Three discussion for a while, and that's when he wasn't projected as 1st overall.

More on Fowler after the jump... 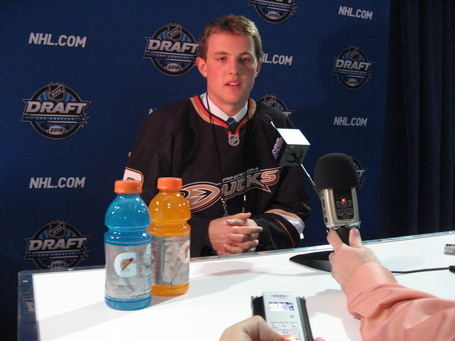 As Fowler says in his interview, the Ducks didn't even interview him at the Combine. Still placed somewhere between 3rd and 5th on a lot of boards, you have to assume he was in that range on the Ducks' estimation of the final board as well, making the hope he would fall to 12th a likely waste of time.

Speculation on why he fell will probably home in on his lack of an assertive physical game, but that does little to explain why Gormley, of identical size but more physicality, also fell. It would, however, explain why McIlrath went so high. Just comparing the final board to Bob McKenzie's, it seems there were a lot of teams that could have traded down, and many teams did seem to take their time without a single trade happening until 13th.

Without reading too much into it (i.e. he fell so far that it's not a steal as much as it is downright suspicious), the Ducks got incredible value for a 12th overall pick. As far back as November, your blogger said he was a reason to tank the entire season (though Kabanov was also mentioned as pretty high back then if that gives any indication of what happened in that time), and if there is indeed no mystery then this is an ABSOLUTE steal, on par with Bryan Murray absconding with Getzlaf.