ARTHUR:
To hear Bob Murray tell it, all hell seemed to break loose when the Columbus Blue Jackets took Ryan Johansen 4th overall. Suddenly, there was a premium on forwards, and both Cam Fowler and Brandon Gormley fell out of the Top 10. It's hard to say if the Draft board ever recovered from that, or what teams did, exactly, to adjust, but the Ducks may have benefitted from it twice, first with Fowler and then with Emerson Etem. Anaheim got 5th and 17th value out of 12th and 29th picks respectively. More on Etem after the jump... 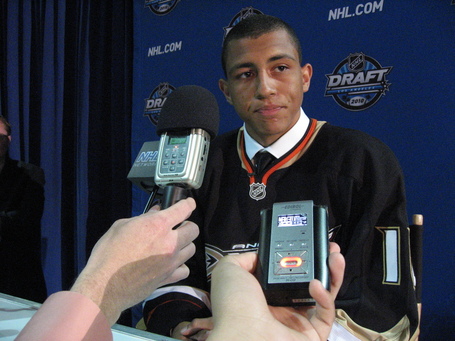 The Long Beach native's 37 goals led all WHL rookies in scoring last year, and that performance was the culmination of a long trip to Draft day, which carried Etem from Southern California to Minnesota's famed Shattuck St. Mary's to the National Team Development Program in Michigan and finally to the Tigers of Medicine Hat, Alberta. Only to end up coming home to the Staples Center and drafted by the Ducks, a team that plays 20 minutes from where he grew up.

The book on Etem is that he's got a great shot, incredible speed and a strong work ethic. He gives a solid interview, and he's worked hard to develop his game and his body, which he put on display with Combine Fitness Testing Top 10 finishes in Aerobic Fitness Test Duration, 4 Jump Average Height, Vertical Jump, Leg Power, Curl-Ups, and Pull Strength.

His flaws? He relies on that speed to the outside a little too much i.e. not all that creative offensively, and that gives the impression of a player who's a little bit raw. But, as they say, give me two guys who get to first base at the same time, one with terrible form and one with perfect form, and I'll take the guy with terrible form every time. (Because, if you teach him proper form, he'll get there faster).

So, all in all, today was an ideal situation. The Ducks took advantage of their 12th overall pick; they selected a player who not only fell out of the Top 10 but the Top 5. Then, at 29th, they got a player with the raw tools (speed and shot) they were severely lacking in the cupboard. In terms of 'best player available' and 'organizational needs,' they could not have had a better Draft.