For those who've become accustomed to the Draft as the new trade deadline, Friday's events were undoubtedly disappointing. The 'blockbuster deal' was nowhere to be seen, and the first 12 teams picking at Staples Center held onto their selections, even though many were rumored to have been interested in trading up or down. Anaheim was a team interested in moving up, but the Ducks were also the team that seemed to benefit most from staying put.

"It's funny," says Ducks Senior VP of Hockey Operations David McNab, "If we'd moved up, we'd loved to have gotten [Cam] Fowler [at that new pick]. But that's our opinion, and that's not a knock on anybody else to say, 'how did he end up at us?' There were one or two players that we thought we would like to move up and get, but to be honest, really, [in our estimation] Fowler wouldn't have been there, because we never thought we'd get high enough to get Fowler. We thought he'd go higher. . . And It was fortunate for us, because it was a guy that we really wanted. And I think that's the way you hope the Draft works, that the players get taken by somebody who's really excited [about them], and that's what's great for Fowler. It doesn't matter if he went 3 or 12th."

Fowler's descent from a consensus Top 5 pick was a hot topic of conversation at the Draft. Anaheim Ducks GM Bob Muray explained the phenomenon by noting that Columbus' selection of Ryan Johansen at 4th put a premium on forwards, perhaps forcing teams in the 5 to 9 slots to take the next best available on their list. And with five forwards selected after Johansen, that theory of the surprising first-round shake-up would seem to hold water.

"Drafts are great and they're fun and they're interesting, because everybody has their own opinions and you never know what's going to go on," McNab offers. "So that's what makes it really a challenge; you just never know. There will be somebody that will 'fall,' [where] people will say that this guy should've gone higher or that guy should've gone higher, but everybody likes players differently. Every team has their own thoughts on who they like and what they need. And you're seeing a little bit, maybe in the NHL Draft, where everybody says they'll take the best player-- and I think they still, at the end of the day, do --but they might be taking a little on position now. Especially if they think they can get a guy that can maybe step in and play right away, or real close, and [if they're picking] so high in the Draft, they may actually take a position. If they have a lot of defenseman, they may take a forward."

Whatever the reasoning behind the selections of the 5 to 9 teams, their decisions seemed to impact the entire first round. Phoenix and Los Angeles were able to trade up to take defensemen (Gormley and Forbort respectively) who otherwise wouldn't have been there; those selections then affected which forwards available in picks 16-30. And that's where Anaheim was able to reap the benefits of an unpredictable first round, yet again. The Ducks took Emerson Etem, who had been projected as maybe the 17th best player available this year, at 29th. And while Etem is a California native coming to a California team and selected at the first NHL Draft held in California, McNab is quick to point out that they liked him going in, and were just as excited to see him at 29th as they were to see Fowler at 12th.

"He was a player our scouts really liked, so the fact that he was from California, it was not a tiebreaker. It is not like we had four guys and said, 'well, let's take him because he's from California.' He was the guy that our scouts wanted at that [pick]. The fact that he was from California, obviously, makes it really exciting for us, and not because the Draft was in Los Angeles, but to take a local guy who we really liked, and to get him in an important part of the Draft, is great. This is a guy that we really think will play, and if somebody else had taken him, we would've said the same thing, [that] he was a guy who we thought would end up in the NHL sometime. And the fact that we think we have our first legitimate shot at a guy we drafted ending up in the NHL playing for us is great."

Etem grew up a Kings fan, even nothing he thought the Kings might select him when they traded up to 15th, but with the Ducks making him a first round selection to a booming ovation at the Staples Center, whose crowd included many of Etem's friends and family, the Long Beach native proudly proclaimed, "the Ducks are my favorite team now." And the good feelings continued into Day 2, where Etem could be seen at the Ducks table, smiling and chatting with management.

The Ducks' second day at the Draft opened with a strong selection in Devante Smith-Pelly, a second-round prospect with plenty of power forward potential, and Anaheim managed to have a strong second day overall, despite starting with only five picks and not a single pick in the third and fourth rounds. Bob Murray added a fifth-round selection by trading bottom six winger Mike Brown to Toronto's for the Leafs' fifth-round pick (122nd overall). With that selection, Anaheim claimed Colgate-bound scorer Chris Wagner.

"Bob was trying to get extra picks, because we had some guys we liked," McNab recalls. "So it wasn't really, I mean, history will say it was that player traded for that pick and that's who we took, but it was [a pick acquired] for the whole Draft, where we wanted to just get more picks, because we thought we had some good players left on our list."

Wagner and the Ducks' four other picks from rounds 5-7 (Tim Heed, Andreas Dahlstrom, Kevin Lind, and Brett Perlini) will all be in the SEL or the NCAA in the near future, giving the impression that the Ducks focused on players going through a free development process. That would seem to maximize the potential of the team hitting the jackpot with these late round picks, which Director of Amateur Scouting Martin Madden told Lindsay Kramer were "longer-term projects, more in the home run category." But McNab is quick to caution anyone against seeing a trend or a purpose in that coincidence. 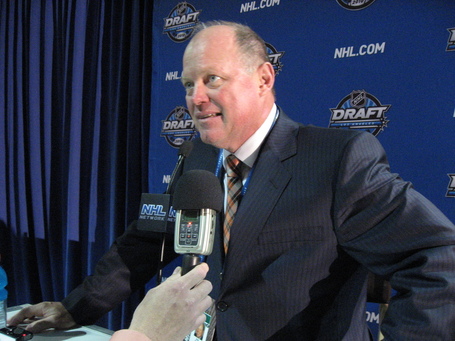 Despite a coterie of mostly late round picks, the Ducks may have been the winners of this year's Draft. They definitely got the most value in the first round. And that was exciting to see in a Draft that was successful for Southern California overall. The Staples Center hosted a great event, the fans came out in numbers loud enough to boo the Ducks and give a building-rattling ovation to Beau Bennett, the highest drafted California born-and-trained player ever at 20th, and a potential Southern Californian star went to a Southern California team when the Ducks drafted Emerson Etem.

"I guess what this Draft did," McNab estimates, "It really talked a lot about the California players. With the Draft being here, with the California guys rated so high, and the emphasis, whether it be by Luc Robitaille or Gary Bettman, who spoke before the Draft, or the different media circles saying this was the 'California Draft' potentially, it was great. Because I think now, it won't be a big surprise when guys go in the first round from California. And I think it's going to start to be a standard thing that there are going to be guys in the first/second round all the time from California"