Share All sharing options for: Robby Gets The Inside Scoop on 2010 - 2011 (And Upgrades His Seats)

Today, the Ducks held their annual ticket upgrade event. Season ticket holders are segmented by their seniority and are allowed the opportunity to wander an empty Honda Center, looking for available seats. While I was excited to attempt to improve my seats (and I did!), the Open House aspect of the event also intrigued me.

It did not disappoint. Kent French, Ducks TV commentator Brian Hayward, and GM Bob Murray all took the podium to dish on the latest about the Ducks and Honda Center.

Follow me after the jump for info about Bobby Ryan, the elusive third jersey, and planned changes to both Honda Center and Ducks broadcasts.

Because I've only been a season ticket holder for a year, our group wasn't scheduled to enter Honda Center until 3:00. While our late appointment made for relatively slim pickings, it made for a streamlined barrage of information from Hayward and Murray. The following is a topical summary of what Murray and Hayward had to tell us, as well as information culled from talks with other Ducks employees and fans. 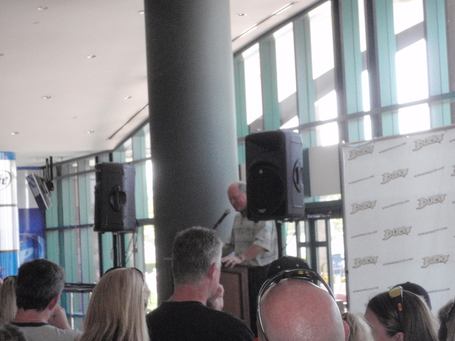 When Murray took the podium, he kicked off his time with a summation of the Bobby Ryan situation. Murph reiterated the reported offer of 5 years $20-25M to Ryan, but he mentioned that it's closer to the $25M figure. As he has said on several occasions, Murray stated that he's not worried about negotiations with Bobby but he also stated that he understands the trepidation over the July 1st exclusive negotiating deadline. He said that this year is different from the Penner situation and he again affirmed that the Ducks will be able to match anything.

When discussing Wisniewski later on, Murray made an interesting comment that seems to indicate negotiations are proceeding well with Ryan. Murray said, "Bobby is not the hard part this off-season, Wisniewski is. We're not that far apart with Bobby, but we're having trouble seeing eye-to-eye with Wisniewski."

After addressing Bobby, Murray went on to talk about the Teemu situation. Muray said that he spoke to Teemu's agent before the draft who indicated that Teemu is still undecided and is not leaning one-way or the other. Murray commented that he thought this was a good sign for the Ducks, and he also said that he's hoping he can get Saku to convince Teemu to come back and play. Saku and Teemu have the same agent, and Murray's comments seemed to imply that negotiations are proceeding (and perhaps proceeding well) with Koivu and that Koivu is likely a key player in whether or not Teemu plays next year.

Murray was perhaps the most animated and most effusive in describing Sbisa. Murray said he saw him recently and said that he's now "a man and is ready to play." Murray said unequivocally that Sbisa will be on the squad next year.

For the first time in a long while, we got a bit of good news regarding the man who will win us all bikini pics of Jen. Murray said that Lupul has progressed to the point that he will begin skating after July 4th, when the organization's younger players begin reporting to the club.

Things are not going well with the Wiz. Murray confirmed that the Ducks have (or will, not entirely sure) tendered a qualifying offer to James Wisniewski to retain negotiating rights. Murray believes that the situation will proceed to arbitration as the organization and Wiz are miles apart. Murray seemed visibly irritated discussing the situation, which made his positivity regarding Bobby Ryan appear to be more sincere and honest. I could be wrong, but I really don't think Murray is a master manipulator of emotions. Regardless, the organization's relationship with Wisniewski could probably be best described as tenuous at this point.

Murray said that he understands why people are sad about losing Mike Brown and said that he's sad, too (strange thing for a GM to say post-trade), but his justification was that the Ducks had too many RW forwards who couldn't play LW. He said that Parros will likely get more playing time as a result of the move.

Murray said that they were very pleased with the Draft. When someone asked about the captaincy, Murray seemed to scoff at the notion that they had any plans for it at this point. This definitely seems like a situation that will evolve as the off-season plays out.

The third jersey will officially be unveiled when the Ducks wear it for the first time on November 26th, the annual post-Thanksgiving matinee game (against the Blackhawks for the second straight year). While no details were officially announced regarding how the jersey will look, conversations with other fans and personnel yielded insightful details.

Multiple fans told me that they had caught Murray in an elevator earlier in the day and that he confirmed the jersey would have orange in it, but there was no explanation about the degree of orange. In talking with the Ducks director of merchandising about the third jersey, she wouldn't divulge much, but she said that she personally would wait to see the jersey before purchasing it, which obviously makes me think she's not wild about it. She also told me that Parros was heavily consulted during the design process and that he may be the only player that has actually seen the jersey.

If you want to preorder the jersey, contact the Ducks Team Store up to November 25th to preoder and pick-up the jersey on November 26th.

Brian Hayward elicited a round of cheers from the crowd when he announced that all games on KDOC would now be in HD. Hayward said that the Samueli's are pushing for more games on KDOC in the coming years as they think it's important to have the games available locally.

Hayward mentioned that the Samueli's are committed to keeping Honda Center as one of the premiere arenas for hockey and stated that they plan to keep upgrading the facilities. A big change for 2010-2011 will be a bevvy of new food vendors that will offer cheesesteaks, freshly wok'ed Chinese food, and more. Another significant change will be the addition of several branded food franchises as vendors in Honda Center. The new food will be debuting on Opening Night (October 13).

So there you have it. Quite a bit of news from Ducks personnel. And if you're curious, I did mange to upgrade my tickets a bit. We're now on the other side of 409 in row P (the lowest row for the buy 2-get 2 tickets). For a visual idea of how the select-a-seat thing works, check out this picture of Honda Center. Any seat with a piece of paper on it was available as an upgrade. 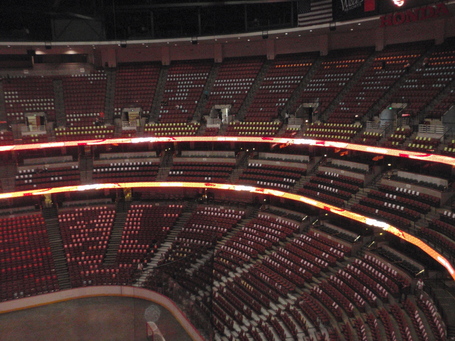