ARTHUR:
If you haven't been following our coverage of the 4th Annual Ducks West Coast Prospects Camp, maybe you should go back and take a look.  Two California players were drafted in the First Round at this year's Draft, when the Ducks took Emerson Etem and the Penguins took the highest drafted California born and trained player ever in Beau Bennett, a former participant of the Ducks West Coast Prospects Camp.

Some of the best players in California gathered at Anaheim Ice to be scouted by over 20 next level programs, including USA Hockey, six College Division I coaches and five CHL teams.  Our full recap after the jump...

There were some '93 players who were noticeably missing from this year's Camp, but that may have been more of a scheduling conflict than anything else.

"Those kids now are seriously looking at 18AAA and, in particular, Junior leagues," explains veteran coach, Randy Moy, who was preparing scouting reports for the Camp, "So the '93's weren't quite as well represented here, but I think it's more understandable, because they already have [team specific] tryouts and camps arranged for next season."

And the Camp didn't suffer for lack of those players, as the skill level stayed incredibly high, and the kids who may have needed the scouting exposure even more than the absent '93's were given the opportunity to shine.

"I think this is the highest level of skill that we've had in any of our previous three camps," says the event's founder, Newell Brown, "Every coach or scout has come up to me and said, 'Man, I can't believe the talent in California.'  So I think it's been enlightening for them, and hopefully it's gonna attract even more attention for the California players."

Two of the names on everyone's lips were Nic Kerdiles and and Nikolas Olosson, both '94 birth years and both headed for the National Team Development Program in Ann Arbor.  Kerdiles had an incredible Camp, though as he has already committed to Wisconsin, he was just looking for some 'good ice' before heading to the NTDP.  Olosson was returning from major shoulder surgery, and he played only a couple of games before sitting out the rest of the Camp.  That may have been a smart decision, as this year's Camp was extremely competitive physically.

"The games are very very competitive." Brown notes, "They're getting up and down the ice with a lot of speed, and they're finishing their checks.  There's lots of physical play.  Calfironia kids have been known for more of their offensive abilities and finesse, but i've been really pleased with the amount of competitiveness in the games and the amount of battle and physical play."

Contributing to the chippy atmosphere were players like '95 Alex McCrea and the aptly named '95 Scott Savage.  They laid down some vicious checks and even sacrificed the body to compete on some blocks.  But the player most likely to get under your skin at this year's Camp appeared to be '93 Frasier Haber, whose hard checks and incessant chirping were made only more infuriating by how often he scored.  As a '93 who missed last season, Haber was especially in need of a quality showcase in front of the scouts, and as a difference maker on every shift, he seems to have gotten it. 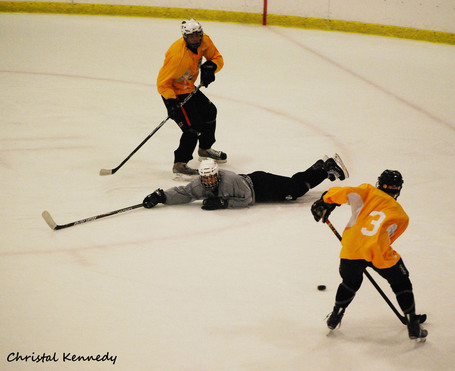 The deepest birth year at Camp seemed to be the '95 players, led by a strong LA Selects line of Chase Deleo, Trevor Moore and Brian Williams on Team Black, the solid work of defensemen Ryan Schlerf and Scott Savage and impressive work in net by Eric Comrie.  The incredible hands and vision of SD Jr. Gulls forward Tyler Moy and some bigger than their size performances from Jr. Ducks defenseman Kohel Nomura and Junior Gulls goaltender Brody Cavataio round out a thoroughly impressive group.  The prospect of having this same coterie of '95's at next year's Camp guarantees my attendance and, I'm sure, that of many of the 20 programs that came to scout the Ducks West Coast Prospects Camp.

I will also note the solid defensive play of SD Jr. Gulls defenseman '94 Matt Williams.  Though only 5'7", he played foil incredibly well to much larger defenseman like 6-foot-three '94 Blake Miller and 6-foot '95 Ryan Schlerf.  And really, there was so much talent on the ice that I will undoubtedly miss someone, especially in the '96-97 birth years (and I hope to update this post later with quick scouting notes from Randy Moy).

It was a pleasure to watch the next great wave of California hockey talent, and even more satisfying to watch the scouts watching them.  The best California hockey prospects have been playing at Anaheim Ice for the past four summers, and those in attendance in previous years have unknowingly witnessed the University of Denver discovering Beau Bennett and Wisconsin discovering Nic Kerdiles.  I'm sure someone else was discovered this year, but the enormity of that may not be evident until they walk to the Draft podium as Beau did four days ago.

Nicolas Kerdiles - 94 birthyear. Big, tall, talented forward who is a gifted puck handler and graceful skater. An early selection to the U17 National Team Development Program (NTDP) in Ann Arbor. Works hard at both ends of the ice.

Nikolas Olsson - 94 birthyear. Another good size, skilled forward who can skate very well and has a pro-level shot. Coming off of shoulder surgery and rehab. An early selection to the U17 National Team Development Program (NTDP) in Ann Arbor. Can play it rough and tough when needed.

Eric Comrie - 95 birthyears. Fundamentally sound, elite goaltender with good size. Works on his game several times per week. Drafted by the WHL and USHL. Two older brothers (Mike and Paul) played NCAA Div. One hockey and in the NHL (Mike still does). His dad, Bill, coached several NHLers while raising the kids in Edmonton. (They moved to southern Cal about 6 years ago, I think).