Share All sharing options for: Bring On The Boyntons 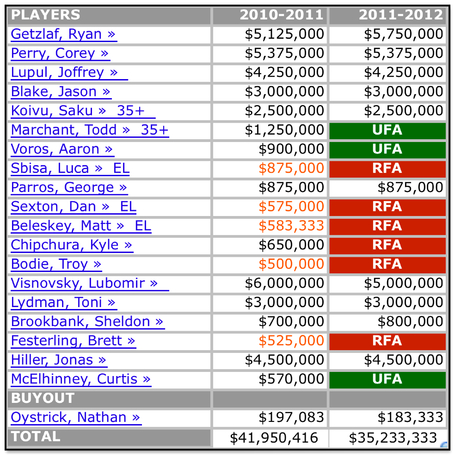 The resulting list has five two-way contracts, all of which become RFA's next year. You can argue about which two-way contracts should or shouldn't be included, but at the end of the day, Anaheim has only nine forwards and three defensemen on one-way deals. Once Ilya Kovalchuk opens the floodgates, there's no reason this team shouldn't be a big player in the trade market. However, if the Ducks aren't one of the first dominoes to fall post-Ilya, if Murray waits to see where the numbers go again, this team's in trouble. Example?

According to Charley Walters of the St. Paul Pioneer Press, if the Wild join the Modano sweepstakes charity raffle, they will do so behind the Detroit Red Wings, San Jose Sharks and Anaheim Ducks. Yikes. I know Murph has to do his due diligence and that there are some legitimate names on his call sheet, but I wouldn't even use my July nights-and-weekend minutes to pursue Mike Modano. Is Nick Boynton not available to play forward?

I loathe bad contracts as much as anyone, but Murray's insistent on taking good contracts on bad players rather than a bad contract on a good player. I know that sounds like a positive quality in a GM, but that's the kind of attitude that will always lock you out of free agency. And honestly, would it be the worst thing in the world if we were stuck with Francois Beauchemin at around 3.5M for another two years instead of taking Wisniewski to arbitration and trading Eminger? Was the latter really a better use of that 4 million dollars?

We're a budget team, so there's only so much he can do, but I would still like to see us help a Cap-strapped team and be on the winning side of the deal in terms of player value, rather than giving up Chris Kunitz and Eric Tangradi to get an attractive backloaded Ryan Whitney contract. Am I suggesting he spend Bobby Ryan's money? Maybe. If you're going to play hardball, play it, and only Murph knows how willing he actually is to spend that money on Ryan this season. Whatever he does, he'll need something big if this team is going to get better or even if this team just wants to get better cosmetically and bring Teemu back. If Murray comes up with the trade-equivalent of these Mike Modano talks, well, he might as well just bring on the Boyntons.