***Perry to Participate in Sold Out Vu Pham Memorial Game***

Share All sharing options for: ***Perry to Participate in Sold Out Vu Pham Memorial Game***

Corey Perry will skate in the Vu Pham Memorial Game in Wingham, Ontario on August 12th.  The charity game will feature NHL players lacing up against select members of the Ontario Provincial Police with all proceeds going to benefit Heather Pham and her three sons, the surviving family of Vu Pham, an OPP constable who was killed during a routine vehicle stop in March.  Pham was extremely active in the hockey community, serving as a volunteer trainer, a coach and an executive member of Wingham Minor Hockey.

Perry's father, Geoff, is an OPP officer, and his grandfather, Cliff, served with the OPP for 33 years.  Strathroy, Ontario native and former Duck Andy McDonald will also participate in the game along with NHL notables Chris Neil, Ryan and Cal O'Reilly, Nick Spaling and Justin Peters

As of yesterday, tickets to the game are sold out, but the organizing committee, headed by NHL referee Kevin Pollock, issued a press release noting the following:

Even though tickets to the game are sold out, anyone wishing to make a cash donation to the cause can send a cheque to the Western Ontario Athletic Association. Cheques payable to the "Vu Pham Memorial Celebrity Hockey Game" mailed or dropped off to P.O. Box 110, 49 Alfred St. Wingham, ON N0G 2W0.

For more details about the game contact Kevin Pollock, Committee Chair at KPollockl@nhl.com 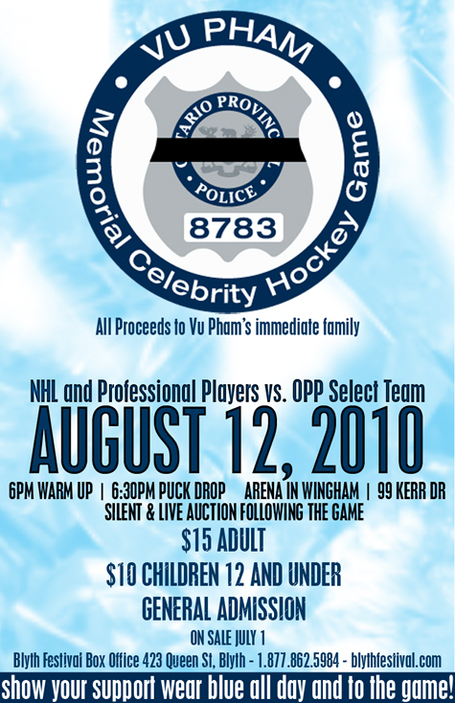