ARTHUR:Anaheim calling to the hockey world...

It was the sort of rink rusty hockey you'd expect in July, but it was also some of the best talent the Ducks have ever assembled at a Conditioning Camp. Teasing at future pairings like Fowler/Clark and future lines like Holland/Smith-Pelly, the Ducks of the future are really something to see. The game ended in a 4-4 tie thanks to the comeback efforts of Kyle Palmieri, but I have some general notes after the jump. 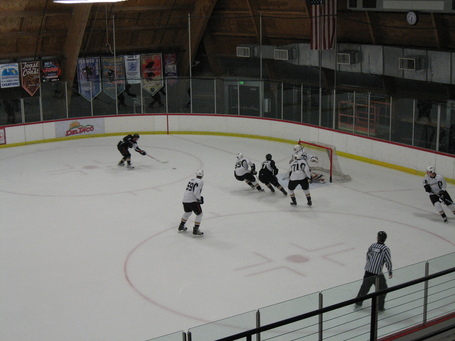 I had never seen the San Jacinto native shoot in stride. It's smooth, accurate and hard as all hell. The defenseman opened up scoring when he saw opposing blueliner Justin Schultz pinch past him. Brining the puck into the offensive zone, now defended by Jake Gardiner and MacGregor Sharp, Newton fired a hard shot over the goaltender's glove.

Offensively, Newton was very effective all game, and he managed to make some smart plays on the puck in front of the net and against the boards defensively. He generally played on pairings with Matt Clark or Ryan Hegarty.

He definitely had some moves-- he managed about the sexiest pass fake I've ever seen --but he was shutdown more often than not. He played exclusively on a line with Chris Wagner. I hope the NCAA kids are still around on Saturday so I can get another look at him.

Easily the prettiest goal of the game, Palmieri stopped on the goal line a few feet away from the post on Cousineau's blocker side. He then pulled it from backhand to forehand, and about an 8 foot diameter around Cousineau's pads, to tuck it in glove side. Palmieri attacked the net hard all game, cleaning up with Justin Vaive on one occasion and a similar backhand to forehand around the pads tying the game up with the goalie pulled in the dying seconds. Word from J.P. Hoornstra, who interviewed Palmieri, is the prospect doesn't expect an expulsion from Notre Dame as part of his arrest and that his court case has been settled, but being forced to go pro early doesn't look like it would disagree with the Jersey boy.

He drew the first cheer from the crowd early in the game when he threw a diving sweep check on the goal line. He also moved the puck well and put some great shots on net in a pairing with Matt Clark. And he drew another cheer from the crowd when he hip checked Emerson Etem hard against the boards. A good all around game, and definitely something to see.

Probably the most physical player of the game, he finished the defenders on the forecheck and came hard to the net, often sure to bring his check with him. That worked out well for his partner for the night, Peter Holland, who came in very focused and threw a lot of quality shots in from the perimeter. Smith-Pelly's goal on the doorstep off a Holland rebound was smooth and it was good to see the hard push from him.

Etem and Sexton brought a strong speed game, Kevin Lind looked pretty solid on D and NIcolas Deschamps and Maxime Macenauer made a strong combination. Jake Gardiner and Justin Schultz were a sketchy pairing-- they even got caught trying to pinch simultaneously early in the game --and Schultz was burned while activating at least twice. They're the Badger boys, but they don't often play together back in Wisconsin.

I still haven't seen Tim Heed, but I'll be back on Saturday. If you go on Thursday, let us know how it was.