Share All sharing options for: The Joffrey Lupul Goal Counter 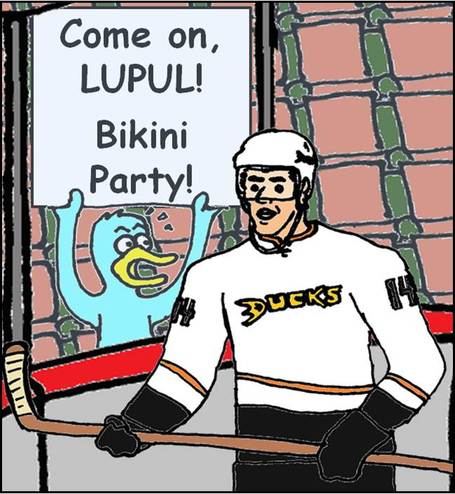 And now for something completely different.

Amidst these dog days of the summer NHL news cycle (not to mention rumors that Loops may be out until December), we bring you the long awaited Joffrey Lupul Goal Counter. And by 'we' I mean Earl Sleek as he put in the only real work in creating the thing. Thanks, Sleek! The goal counter will hold the prominent position in our right sidebar, making it even less likely (if that's possible) that anyone will check our Fanshots.

For those that may not remember The Joffrey Lupul Goal Counter, I direct you to a fanshot in May when our staff writer Jen made the following statement:

If [Lupul] reaches 35 goals for the Ducks next season, I will post a picture of myself in a bikini on this website.

Why did Jen lay the bikini gauntlet down on young Joff? Well, for that, we're going to have to go all the way back to Jen's first post for Anaheim Calling back in April.

In asking Jen to join this site, I was hoping to bring some acerbic wit to the staff, and with her first swing of the bat, she knocked one out of the park, taking shots at most of the Ducks' prime scorers on the way there. Her sarcasm was perhaps a little too caustic for Loops, however, as he responded thusly on his Twitter:

@vivianmtl Ouch! Poor Jen has issues... Heres a thought, if my tweets bother u so much, don't follow me.8:40 AM Apr 11th via web

just to clarify, cuz Jen has me rattled... missing the entire year w/ a blood infection, was not as fun as my tweets indicated8:47 AM Apr 11th via web

We spent most of that week debating Joffrey's many devotees on the existence of humor, whether or not we were taking shots at Loops for missing time with the blood infection or the quadrupled timetable he missed after he was cleared of the blood infection and the validity of needling a guy who put his foot in his mouth long before that foot was associated with a Twitter account.

So, really, this showdown was a long time coming. Assuming a healthy Lupul (and the chasm traversed by that assumption seems to grow by the day), how likely is it that he reaches 35 goals? Consider this: though he played only 14 games last season, Lupul was 4th in the NHL in goals per 60 minutes of 5-on-5, with a 2.07 rating. He was also earning his ice time defensively, playing the penalty kill, elbowing the opposition and blocking shots. And while Lupul showed off a knack for passing, I again refer you to the 2.07 rating. Honestly, though, with this bet in play, how many of us won't be screaming "Get it to LUPUL!" in every gameday in every empty net situation this season?

Of course, if he can't make it to the church on time this year, I would expect Bob Murray to marry the Ducks to a replacement goal scorer and for the Joffrey Lupul Goal Counter to stay frozen as it is below, radiating the false hopes of seeing Jen in a two piece. FOWL? You'll have to tune in to find out. 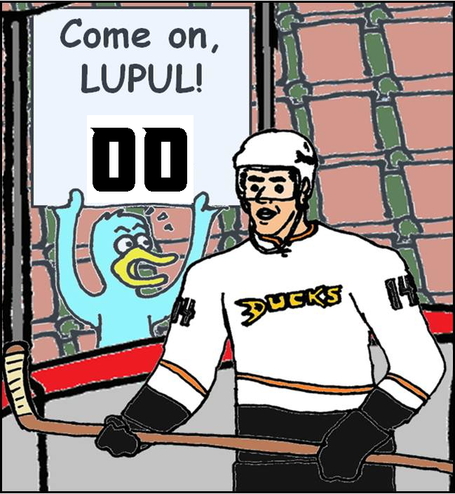