Share All sharing options for: Duck Tales: Defending The Pond 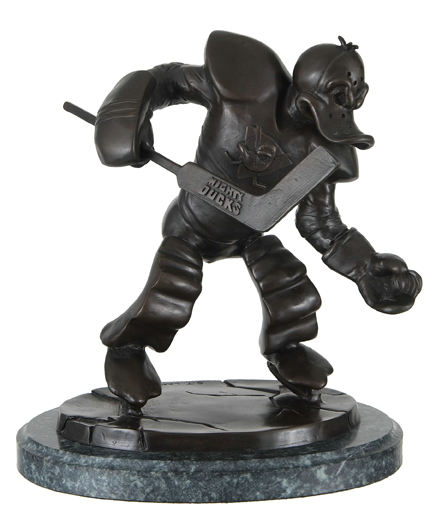 via Hake's Americana & Collectibles
A miniature reproduction of Defending The Pond made by Disney Art Editions in a limited run of 1,993 and sold at The Disney Gallery above The Pirates of the Carribean attraction in New Orleans Square after the team's inaugural season. The Sculpture retailed at $975.

Anaheim calling to the hockey world...

The Wild Wing statue sits on the left side of the South Entrance to the Pond, serving as a standalone throwback to the franchise's Disney days. It's a throwback not because of Wild Wing himself, who remains the Ducks' mascot, but because the bronze figure holds a paddle that still reads 'Mighty Ducks' and the name of the sculpture is "Defending The Pond" (though the powers that be did replace the Arrowhead seal behind the statue with a giant Honda emblem, giving you the impression that Wild Wing is defending an Acura Integra).

The statue's plaque reads as follows:

DEDICATED TO THE MIGHTY DUCKS' FANS, PLAYERS AND

TEAM MANAGEMENT FOR THEIR SUPPORT AND HARD WORK

IN MAKING THIS SPORTS FRANCHISE A REALITY.

At the time the piece was commissioned, Stephen T. Landis had a pair of noteworthy hockey sculptures on his résumé, namely an award-winning statue of the Red Wings' Production Line and a life-size bronze of legendary coach Murray Armstrong on display at the University of Denver's Ritchie Center. Obviously, as far as Ducks fans are concerned, "Defending The Pond" was his best work.

In the post-Disney re-branding, I've always been happy that the statue wasn't removed, renamed or re-jiggered in some unnecessary way. I still refer to the building at Douglass and Katella as "The Pond," (with 'Ponda Center' acting as a quiet compromise), and it's not because I abhor the trespass of corporate sponsorship into my mouth or because I'm married to the unparalleled symmetry of a team named the Ducks and a venue named for a Duck habitat. Quite simply, I wouldn't know what Wild Wing or any player who wore the Anaheim sweater was defending if I didn't call home ice "The Pond." The statue represents whatever tradition is possible for this 17 year-old franchise, and it represents it well.