Earlier this week, we looked at two of the four channels the Anaheim Ducks use to bring their game to fans, the in-house experience and the radio experience. In part two of the "Place" audit, we'll be taking a closer look at how the Ducks are presented on TV and their overall Internet presence. 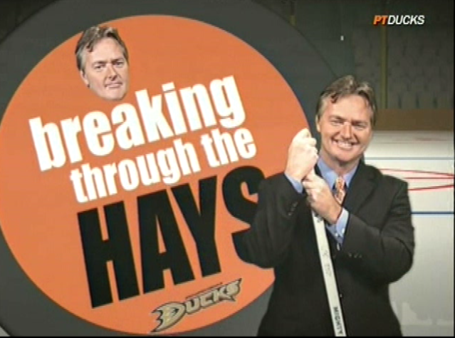 via 2.bp.blogspot.com
Admit it, this picture makes you chuckle. Or hulk up with rage.

Without a doubt, TV is the most critical piece of any modern sports franchise's communication strategy. TV allows a team to bring the game to the greatest possible number of people at the lowest possible cost. Simply stated, a significant amount of a team's financial (especially operating revenues) and marketing success can be generated through television.

The Ducks also aired games on KDOC, a local-cable channel based in Anaheim that is owned in part by the Samuellis, the owners of the Ducks. Unlike FS Prime Ticket or FS West, KDOC is freely available over the air and does not require any sort of cable subscription. Unfortunately for the Ducks during 2009/2010, the KDOC partnership was a double-edged sword. While they benefitted from KDOC's readily available nature, all KDOC games were broadcast in standard definition, and KDOC experienced satellite relay issues during a December 22nd game in Colorado that caused the entire first period and part of the second period to be blacked out. At the season ticket holder Open House in June, the Ducks announced that KDOC would carry games in high definition during the 2010-2011 season. The Ducks also announced that they intend to increase the number of games carried on KDOC in future seasons.

As a west-coast based team, the Ducks got zero love on the national scale last year when it came to television. Not a single game, home or away, was broadcast on any of the NHL's domestic nationwide partners of NBC or Versus. However, several Ducks games were carried on Canadian affiliates TSN, CBC, and RDS. In fact, over the past two seasons, a grand total of one game has been carried nationally in the US (a game against the Sabres in 2008-2009). As with other NHL teams, Ducks games are also available through the Center Ice TV package.

Ducks games are broadcast by John Ahlers and the ever-polarizing Brian Hayward. Ahlers and Hayward have been doing Ducks games for the past several years, with Ahlers as play-by-play and Hayward providing color commentary. Hayward, in particular, received significant national attention this year when he asked if Brent Seabrook "was selling it" after getting smoked by James Wisniewski in retaliation for a questionable hit on Corey Perry that drew no penalty. Hayward's popularity has been (and will continue to be) debated here and elsewhere, but I do think he tries to educate fans about the game. Overall, I personally have no complaints about Ahlers and Hayward, but that's probably because the only other broadcasters I regularly hear are the NBC, Versus, or Kings pairings, none of whom particularly impress me.

Moving forward, I think the Ducks should definitely continue to leverage their KDOC relationship. Because of the Samuelli's interest, it's probably naive to think that the Ducks would ever get away from that network. The principal benefit of a network like KDOC is that it permits the Ducks to air games that would otherwise be left to radio or the Internet. While I wasn't able to find a specific count of how many games were unaired altogether, I would guess that somewhere around 8 - 10 Ducks games last year were not televised on either of their main broadcast networks.

But I have a huge ulterior motive in getting the Ducks on Fox Sports West, and that's the exposure to the San Diego market. I harp on this all the time, but I really think the Ducks should target San Diego more than they do. When the Gulls existed in San Diego, they did have some phenomenally popular years and I think an interest in hockey still prevails in San Diego. Having more games on Fox Sports West would allow the Ducks to tap into this market on a more regular basis and, coupled with a radio partner in the region, might allow the Ducks to create an entire new region of Ducks fans.

The final "place" where Ducks games can be consumed is online. You can listen to every Ducks game online through their main Web site and you can watch out-of-market Ducks games if you have subscribed to NHL GameCenter Live, the NHL's answer to MLB.TV in baseball.

I personally love the concept behind Game Center Live, but I wish there was a pay-per-view pricing plan that would allow me to sign up for the 8 to 10 games a year that aren't televised instead of signing up and paying per month. Of course, if the Ducks would just televise more of their games, this would be a moot point. But I digress.

As a team site goes, I'm not sure the Ducks go a great job with their site. I'm also not sure how much latitude they have with the site, but I don't feel like they use it to the extent that they could. After taking a quick look at the Kings site, I don't see anything that really differentiates the two, but I just feel that the Web could be better used as a platform to break news and profile the players. Too often, it feels that news breaks at the OC Register and one ends up waiting hours to confirm something on their main site. The other reason why I feel that the site is under-utilized is because it never seems to be mentioned during radio or TV broadcasts. I think most major sports under-utilize their Web sites, but as someone whose job is primarily marketing via the Web, I think it's an easy, cheap opportunity to build your fanbase. It doesn't take all that much time or effort to create interesting, original content (how hard is it to put up some player or practice video) and it's fairly inexcusable how long it takes the site to be updated at times.

So there you have it. Of the four "places" where you can experience a Ducks game, I think the Ducks do the best job with their live experience and I'd probably rate radio as the worst, simply because of the lack of a full-fledged partner. At any rate, one thing that becomes obvious when looking hard at each of these places is how under-promoted games are. If the Ducks truly want to grow their game, I think they must find ways to make the team more accessible, and broadcasting more games is the most effective way to do that. The Ducks also have opportunities to extend the geographic extent of the market south to San Diego, which I think is a truly critical piece to the long-term health of the franchise. The Ducks will always be second fiddle in the Los Angeles DMA when it comes to hockey, so they should find ways to operate in markets where they have no competition.