This One Time at Ducks Camp

Share All sharing options for: This One Time at Ducks Camp

ROBBY:
Today I lost another piece of my hockey virginity as I attended my first practice and preseason camp. What follows is a detailed review of my day at Anaheim Ice as well as some advice and thoughts as a first-timer for others who may wish to check-out the Anaheim Ducks some time before the season begins. 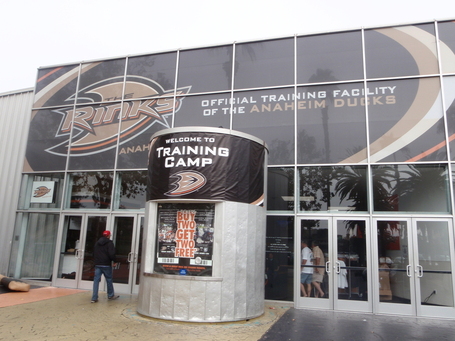 We arrived at Anaheim Ice around 10:00 a.m, and the parking structure was already packed. Practice had begun at 9:15 and as we arrived, the team was broken up into two groups on both the NHL and Olympic sheets of ice (for those who are unfamiliar with Anaheim Ice, they have both NHL- and Olympic-sized playing surfaces). The Olympic group (which eventually became team White during the scrimmage) featured Perry, Getzlaf, Blake, Parros, Chipchura, Smith-Pelly, Fowler, and others. 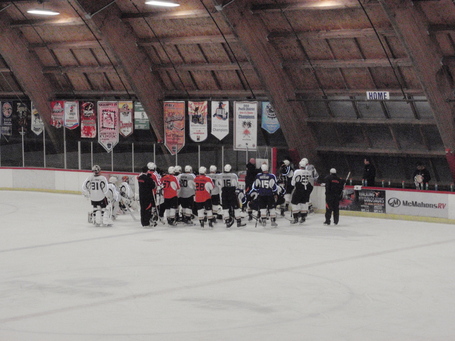 We hung out on the Olympic side for a while, watching various drills. For those who are new to training camp, the players wear color-coded jerseys. After a while, I needed my Bobby fix, and we headed on over to the NHL ice surface that was absolutely packed. The NHL ice features a decent bleacher section, and by 10:15, there was little room left. (On a side note, the Anaheim Ice management crew said that today's turnout was the largest ever). While the Olympic side featured more of what I'd call our premier prospects, the NHL side was packed with mainstays like Ryan, Selanne, Koivu, Hiller, and Visnovsky, as well as promising young NHL'ers such as Sbisa, Beleskey, and Sexton. This crew eventually became the Black team during the scrimmage. 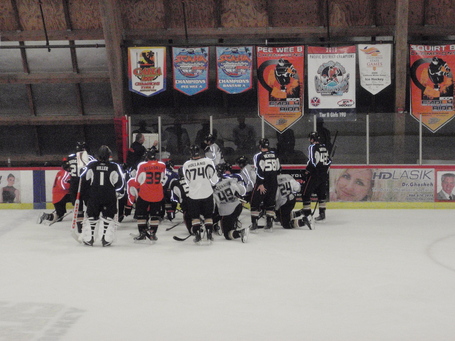 Soon after heading over to the NHL side, the players headed underneath the stands to prepare for the scrimmage. Around 10:45, the players funneled onto the ice in black and white jerseys. At this point, the stands were absolutely packed, and even Ducks staff such as Ahlers, Hayward, Brady, Murray, and Carlyle seemed sort of surprised at the turnout as they navigated through the crowd. The puck was soon dropped, and the 45-minute nonstop clock began ticking away. 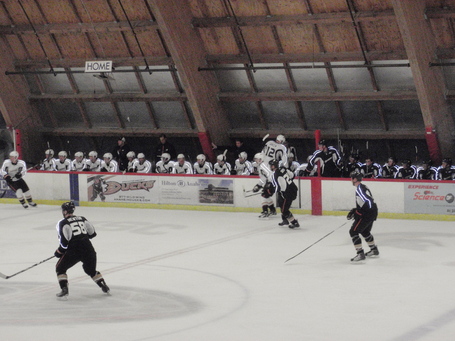 During the scrimmage, there were a few penalties, all of which automatically resulted in penalty shots where the players basically chase the shooter down. During the first half of the scrimmage, none of the penalty shots were converted for goals, although the White team pretty much had their way with the Black team. Play was constantly in Black's defensive end, and the rotating goalies couldn't stop the White team from scoring (about every ten minutes, the goalies would completely change out and it led to a couple of amusing situations where an incoming our outbound goalie was pinned against the boards while play continued around them). During the first half of play, someone spotted Joffrey Lupul below the stands, and he graciously signed anything people dropped down to him.

At the end of the first half, the players came off the NHL ice and journeyed over to the Olympic side. As a camp newbie, I was totally unprepared for this, and it soon became obvious that the Olympic ice side of the compound would not support the crush of people that had turned out for the scrimmage. At that point, we made the decision to call it a day as my pregnant wife and balky-back mother would have struggled to stand through the rest of the game. According to Twitter, the Black team had a field day on the Olympic side, and play eventually ended in a 3-3 tie. I could try and tell you who scored and who didn't, but without the benefit of official announcements, you're better off waiting for an official report from the Ducks (or their Twitter account).

I really enjoyed my first time at camp, and I may try to catch another scrimmage at some point if I get the opportunity. The Ducks will have open practices over the next week, so if you get a chance, I definitely recommend that you take advantage of the opportunity. I hope some of these first-time perspectives help you out. If you were at camp today, share your impressions below.