ARTHUR:
Daniel and I were at Frank and Son on New Year's Day, and I purposely avoided the McFarlane Toys stalls for three reasons: 1) I knew they would have the Ryan Getzlaf McFarlane figure, 2) I knew they would be charging $50 for it and 3) I knew I would end up buying it.

My initial excitement for the Ducks captain's inclusion in McFarlane's latest NHL series was thwarted both by the fact that the final paint looked nothing like him and the fact that McFarlane Toys decided to make Getzlaf a "Collector Level" figure. "Collector Level" meaning they would only produce 3,000, and the resulting retail price would be approximately $30 in most places (the standard toys retail for about $14.99).

Now, I know what you're thinking. "McFarlane Toys are a faded fad. You get what you deserve for being interested in passé collectibles. You might as well be writing about Mighty Ducks pogs." That valid point notwithstanding, the Ducks have traditionally gotten the short end of the stick when it comes to McFarlane figures, and it's a great representation of how hard it is to be a Ducks fan and collect Ducks merchandise, even when they deign to produce it for your consumption.

My attempt to collect the five Ducks figures went something like this:

Series 1: Paul Kariya - Kariya was part of the test run of NHLPA figures, produced without team logos. Once McFarlane secured an NHL licensing agreement, they re-released the first series in what they called "repaints" in extremely limited quantities. Ten years later, a Paul Kariya repaint will still typically run you $200 or more.

Series 7: Jean-Sebastien Giguere - It took a Conn Smythe for another Duck to get a figure, and thankfully Giguere wasn't all that hard to acquire.

Series 9: Sergei Fedorov - Fedorov came only in the Ducks then away jersey. The "variant" on the figure was Fedorov in his Detroit Red Wings jersey. This made it impossible to have three Ducks in home jerseys, and it reinforced the theory that McFarlane chose Fedorov to bilk Red Wings fans hoping to recreate the 90s teams on their mantles.

Series 23: Teemu Selanne - . . . and that was the same story with Selanne (SIX YEARS LATER). They got around to choosing another Duck three years after the team won the Cup, but they probably only did it so they could release a variant, in this case a Jets variant. The original Selanne Winnipeg figure from 2003 had become the company's most collectible piece to date.

Of course, there are logical reasons that McFarlane Toys prefers other teams: he once owned a piece of the Oilers, the company's home base is in Coyotes country, Canadian team toys sell better and McFarlane himself is from Calgary.

Still, it seems unfair that collecting the Ducks' five McFarlane toys should be so difficult, not to mention the fact that a child of 10 can't save up his allowance to buy a Getzlaf figure to bring to Fan Fest for the Ducks captain to sign. 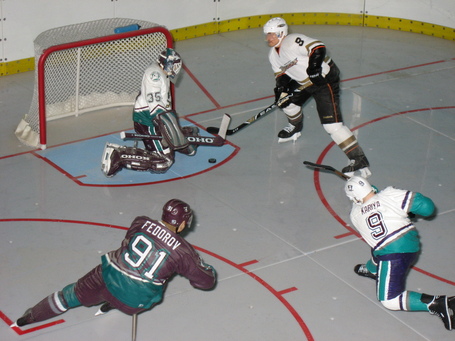