ARTHUR:
For those of you that don't know, AC columnist Jen was blocked on Twitter by Bobby Ryan (@b_ryan9) a while back. As of now, I think she's still unsure of which tweetfoot she stuck in her tweetmouth, but her account has since become a flowery parade of 140-character-floats to get back into the winger-part-time-center's good graces. Since it's Jen, I assumed she was blocked with cause, but he apparently blocks anyone who he feels has spoken negatively while mentioning his Twitter account by name.

Fast forward to today. I was trolling AC writer Robby, world renowned Bobby Ryan lover, in a discussion of whether or not Joffrey Lupul is struggling. Luckily, Bobby Ryan was struggling until tonight, so I had the opportunity to prove that Lupul is actually doing okay while also sticking it to Robby that his boy wasn't finishing. Now, the overall point I was making was that Lupul should be playing more, and he would probably take that time from someone like Jason Blake, not Bobby Ryan but, as I said, I was trolling Robby, so I specifically chose to compare Lupul directly to Ryan to prove that Lupul was playing well.

As I spent time digging up the stats (and really don't tweet enough), I tweeted them. @b_ryan9 blocked me almost immediately. Our back and forth after the jump.

No doubt @b_ryan9 is struggling, but @JLupul isn't. Over equivalent ice time, Loops has 4G 3A to Bobby's 1G 1A. @JLupul should play more via web

Not to say the disparity in those numbers is significant, but Loops has been playing spare parts time and still coming up with the goods via web

I didn't intend to carry my trolling of Robby on to Twitter or anything. These were just stats that prove that Lupul is doing okay. He's not struggling. He doesn't DESERVE to be a third liner right now or anything. He's playing well.

Literally minutes after the tweets go out, I get a Direct Message from @b_ryan9: 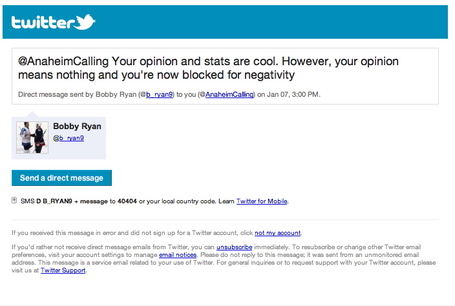 Now, I desperately hope Bobby Ryan didn't craft this DM himself. I hope he pays someone to block users (which is believable though perhaps not the most prudent use of resources), and I also hope that person didn't spend too much time writing this because it's not all that coherent a response.

Bobby Ryan already admitted he was on a slump on his Twitter account, so the "opinion" I stated that offended him was apparently "@JLupul should play more." And here I thought Robby was the only person in the world that felt that that was a negative comment.

I shrugged it off and immediately tweeted the following @b_ryan9 (I could not DM him back as he does not follow us, and he probably blocked me in time not to have to read this)

@b_ryan9 didn't mean that as negative. You admitted yourself you've been in a slump. Just supporting Loops. Do what you have to do thoughvia web

Before I say anything else on the matter, I want to point out that I really don't care what kind of person Bobby Ryan is. I'm not that kind of fan. I don't really read his tweets unless someone brings them to my attention, and I have never sought out information on his personality. The Anaheim Calling Twitter account followed him because this is a Ducks blog and he's a Duck.

I don't know the purpose of Bobby Ryan's Twitter account, whether it's for socializing or building a marketable personality for the public. If it's the latter, I could see how blocking Jen or AC would be a great way of saying he's the kind of person that doesn't stand for negativity, but only if he publicly Tweeted that message to us. Direct Messaging me-- and I believe Jen was never messaged --accomplishes nothing publicly.

If it's a social account, then there's really only one reason to block people privately. It's not to punish them; I mean, the only people you would punish are people like Jen, who like you, wanted to follow you and are now sad that they can't. No, you don't block people privately to punish them, you do it to clean up your @Mentions screen and make sure that when you click to see what people are saying about you, you only see the well-wishers and sycophants.

This could be a legitimate problem going back to Bobby's recent contract negotiations, where he spoke to the press and Murray countered by publicly divulging numbers and details. Was Ryan desperate to have people saying good things about him again? Needing a clean @Mentions screen certainly doesn't contradict that conclusion.

That's a skin far too thin for a professional athlete, and you have to wonder how Bobby would survive in another market if he can't field the negativity of the limited hockey press corps in Southern California and the extremely low threshold of negativity he is prepared to accept on Twitter.

For the record, @JLupul has never blocked Jen or AC, and while I never gave that much thought, Jen pointed out that he seems the better sport for it. After this, I have to wonder how strong Bobby's mental game is when people are down on him. For an athlete, that is the kind of thing that extends slumps, perhaps even causing yips and relapses thereof. Of course, he busted his slump tonight, but I wonder what will happen if he needs to get out of another one and the press and fans are being particularly negative. Hopefully, he'll have installed an internal 'block' button by then.