ROBBY:
Today I attended the 2011 Anaheim Ducks Super Skills Showdown. The event, which was the first of its kind in Ducks history (although they used to do a similar competition as part of the "First Flight" event) featured Team Selanne (wearing the new third jerseys) against Team Marchant (wearing the white road jerseys) in a variety of skating, puck-handling, and shooting competitions. As a season ticket holder, I was also able to attend an exclusive practice and Q&A with General Manager Bob Murray. 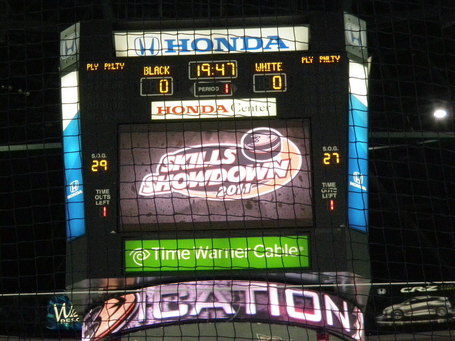 The following is a detailed review of the day's events (from practice in the beginning to the hoisting of the ceramic pig awarded to the winning team) with video shot from just behind the east goal (the goal the Ducks shoot at during the 2nd period of home games). Trevor also makes his Anaheim Calling debut below the fold.

When we arrived at Honda Center at 10:15 a.m., I was stunned by how many cars were already in the parking lot. Doors had opened at 10 for season ticket holders and practice wasn't due to start for another 15 minutes (general admission didn't open until 11). While I was excited about the event, I wasn't expecting the kind of turnout we saw. When all was said and done, the entire lower bowl and part of the club level were filled with people. All in all, a respectable showing.

While I had attended a practice before, I assumed that today's events might be a little different on the heels of the 6-0 shellacking our Ducks put on the Blue Jackets the previous evening. I was not disappointed. Ducks players were out shooting around before practice started, intentionally rattling the glass behind the goals to spook families who were enjoying that vantage point for the first time. Practice soon began, and Ducks TV color man Brian Hayward interviewed Assistant Coach Dave Farrish about each of the drills to get an insight into what the drill was trying to accomplish and what the coaching staff was looking for.

The video above shows an amusing 2-on-1 drill where the forwards and defenseman are punished with push-ups if they do not complete the drill as intended. Forwards had to do push-ups if they missed the net altogether while defenseman were punished if the forwards managed to score. The drill brought some levity to practice and it was great watching the players rib each other and revel in the punishment of their teammates.

After practice (and while zambonis readied the ice for the skills competition), General Manager Bob Murray answered questions from Kent French and Steve Carrol. While this was originally billed as a Q&A with questions coming from the fans, I was a little disappointed that this ended up being a venue for Bob Murray to give a half-season state of the team address. Regardless, Murray did have some interesting things to say:

Once Bob finished, French, Carrol, and ace reporter Timmy Marchant set the stage for the skills competition.The first order of business was introducing the two teams, captained by Teemu Selanne (Team Black) and Todd Marchant (Team White). Each of the captains selected their teams and also picked who would compete in each of the various events.

Before each drill, the broadcast team explained the rules and youth hockey players clad in Ducks gear demonstrated the various drills. The performance of the kids factored into the overall score (which I think is wrong, given how much better the kids on Team Black were).

We ended up rooting for Team White for a few reasons (and I'll bet you can guess the main one). In all seriousness though, we were set up behind the east goal, which is where Team White shot at for most of their drills. Team Black featured the likes of Selanne, Perry, and Hiller while Team White had Ryan, Fowler, Koivu, and Parros.

The first drill was a breakaway relay drill where sets of 3 players had 40 seconds to take 2 shots each. The first player started the clock when he made his initial approach, and he had to take two shots and cross the blue-line once more before the next player could begin. I don't remember the specifics, but I'm pretty sure Team White bested Team Black in this drill.

The next drill was a 3-on-1 power play drill where each set of players had 1 minute to score as many goals as possible. Each team was able to pot two goals during their minute. Personally, I was stunned how well Sutton acquitted himself in the offensive zone during this drill. I know he used to be a forward, but damn, the dude can shoot the puck.

Next up was a combo skating/puck-handling relay and individual race. Team White bested Team Black in the relay portion when Visnovsky lost the puck near the end of his leg while Matt Beleskey (Team Black) beat Toni Lydman one-on-one.

The skating theme continued to the next event which was a timed lap around the rink. Everyone in the place (including me) assumed Dan Sexton would win this handily, but Cam Fowler surprised everyone with a scorching sub-14 second lap. Dude can fly when he needs to.

The second-to-last competition was the ever popular shooting accuracy contest. To the shock of everyone in attendance, George Parros schooled everyone by shooting a perfect 4 for 4. Corey Perry was second best, hitting his targets in five shots while both Bobby and Teemu needed six shots to knock down their targets. Lupul and LaPierre were 1 for 8.

The event ended with the hardest shot competition. I shot video of this but it all took place on the opposite end of the rink so it's not really worth posting. What matters is that Paul Mara had the only shot that cracked triple digits, thus winning the competition (and the entire event) for the Black team. LaPierre and Lupul had the weakest shots of those who participated.

At the end, Teemu Selanne was awarded a ceramic pig for his team's efforts throughout the day. The event ended up lasting about two hours overall and it was a total blast. As someone who rarely gets to sit near the glass, sitting just four rows behind the goal was an absolute treat. There were kids everywhere and I really have to give the Ducks credit for putting on this event. It's a great community outreach effort, and you could tell that the players were also enjoying themselves. Overall, a great experience and something that I hope becomes a new annual tradition in Anaheim.

And finally, for those who might care, here's a brief clip of one-month-old Trevor in his Ducks regalia.