On Saturday, the Ducks held their annual Faceoff Fest, an exclusive event for season ticket holders where you can get autographs, skate on the ice at Honda Center, tour the locker rooms, and more. Last year was my first Faceoff Fest, and I thoroughly enjoyed the entire experience. It was held on a Thursday night and it was pretty easy to navigate around the event and get autographs at will. 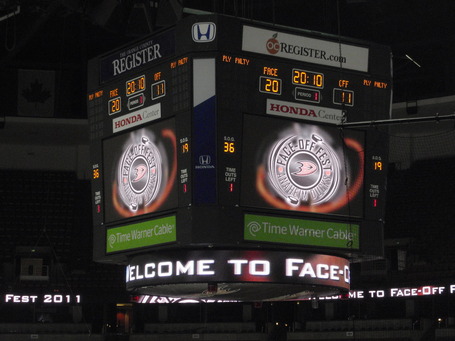 This year? Not so much.

This year's event began at 10 a.m. with an open practice. I didn't attend the practice, but from what I heard, Carlyle didn't put the guys through the paces as much as one might have expected after their dismal showing on Friday night. After practice, fans dispersed to several different locations in and out of Honda Center where the players would sign autographs between 12:15 p.m. and 1:45 p.m.

Last year's event took place in the evening. This year's event occurred in the middle of the day. Yes, packing thousands of fans onto Honda Center's black asphalt parking lot between noon and 2:00pm (the hottest hours of the day) is a really bad decision. I neglected to take any pictures of the area when it was slammed with people, but you can get a sense of how this was setup outside of Honda Center from the picture below. 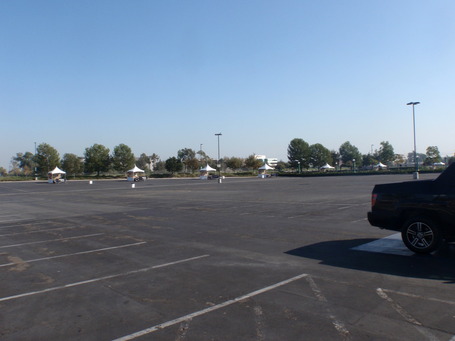 Each of those tents represents a signing location where one or two players were available to sign an item.

It wasn't unseasonably warm yesterday, but temperatures probably peaked in the high 70s. When combined with the throngs of fans, and the heat radiating up from the parking lot, it made for a brutal 90 minutes. There were only two autograph locations setup inside Honda Center, when they easily could have accommodated at least four more signings (the entire upper deck was not being used while only two signing locations were established on the Club level).

Holding this event on a Saturday morning/afternoon instead of a Thursday evening meant that significantly more fans could attend. I know the Ducks were probably thrilled with the turnout, but staff were clearly not ready for the volume of fans that attended. From the parking (no handicapped locations, which is a significant legal issue on its own) to the concessions (more on that later), the staff was just not prepared for this kind of turnout.

Last year, Rebecca, Jen, and I pretty much cruised around Honda Center at will, and I think we visited roughly half of the signing locations while also squeezing in a tour of the locker room. This year, Rebecca and I were only able to get autographs from Teemu Selanne and Bobby Ryan, and even then we were only able to get those autographs because of a divide-and-conquer strategy and the cunning use of friends.

The second factor that further complicated the signings was the fact that the Ducks decided not to pair their stars with any other players. At last year's event, only Teemu signed by himself. This year, Selanne, Bobby, Corey Perry, Ryan Getzlaf, and Jonas Hiller were all on their own. At last year's event, you could at least get a third or fourth liner with each of the stars. This year, if you wanted a star's autograph, you were pretty much limited to only that player due to time constraints. 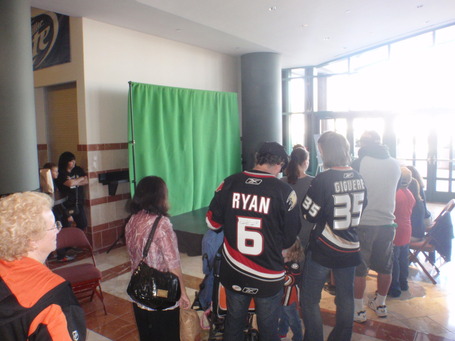 Fans waited in line for over an hour to make their own Ducks trading card. Or so they were promised.

In the Season Ticket Holder Alert email that the Ducks sent out in the week prior to the event, they mentioned that there would be a location inside Honda Center where fans could make their own Ducks trading card. Upon entering Faceoff Fest, fans were handed a map that promised the same thing. The Ducks, for some reason, decided to scuttle this feature without communicating the change to fans at the event. Signage around the booth mentioned the trading card and it was left to a lowly attendant to deliver the bad news to everyone in line. Many people had already been waiting in line for a while before they were told about the change. Instead of the trading card, you could be superimposed on the bench in a picture, as they had a last year's Faceoff Fest.

The same Season Ticket Holder Alert also mentioned that concession stands would be open. With the Ducks making a big deal about their new food locations, I assumed that these stands would be open for fans to try out the new eateries. I was wrong. The Ducks handed out vouchers for free hot dogs, sodas, and chips to each person with a ticket. Yet, only three stands were open to serve the fans. These stands were choked with people. Some locations even ran out of food around 2 o'clock as the crush of fans came came in from the parking lots after the signings ended. I was wrong to assume that the concession stands would be open (although the language in the email was ambiguous at best) but the arena management crew was also unprepared

Faceoff Fest wasn't a total bust. While I was waiting in line for Bobby's autograph, I was joined by new AC blogger Chris and his wife Amy. Given that it took nearly an hour to traverse Bobby's line, we had plenty of time to trade stories about being Ducks fans, the location of our seats, and more. It was great to be able to put a face to a name and I think Chris will bring a lot great perspectives to the blog. He also has the coolest shoes in the world.

While we were waiting for Bobby, we also met our other new member of the staff, SK. She briefly stopped by and said hey before moving on to Cam Fowler's line. As much as I liked Chris' shoes, SK's custom Corey Perry shirt was also pretty damn cool.

I also heard a great story from a fellow fan while I was waiting in Bobby's line. A woman and her son had waited to get Matt Beleskey's autograph. Her son, who couldn't have been more than 7 or 8 years old, wore number 39 (Beleskey's number) for his hockey team. Beleskey signed the boy's jersey, writing "To my #1 fan." As if that wasn't a nice enough touch, somehow the topic of the boy's team pictures came up. As with most youth sports, the boy had gotten his own hockey card created. Beleskey then asked the boy if he could have one of his cards and have the boy autograph it. As you can imagine, the boy was completely blown away. Beleskey then promised to bring the boy a special gift before tomorrow's game (apparently they sit on the glass).

This story perfectly encapsulates what Faceoff Fest is supposed to be about. It's supposed to be the time that fans, especially kids, can meet the players and spend some brief time with them. When we finally made our way to Bobby, he was gracious and friendly (as he always is when I meet him) despite being near the end of slated autograph time. We spoke to him about his Vancouver experience and we traded anecdotes about how crazy it was trying to navigate around the Olympics.

I hate to slam the Ducks because the concept of Faceoff Fest is a great one, but this year just let me down. 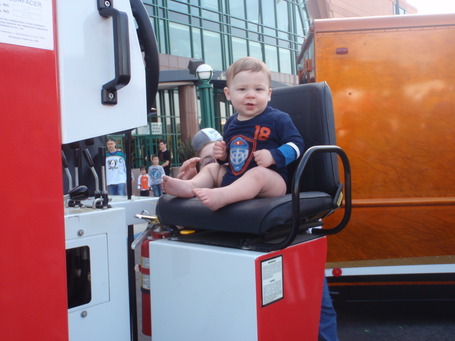 The obligatory Trevor photo. Little dude is getting big. And yes, that's a hockey onesie.

What about you? Did you attend Faceoff Fest? Share your experiences and let me know if I'm just being overly pessimistic.