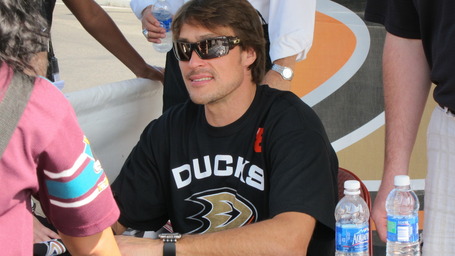 I always enjoy Face-off Fest (even though we all keep calling it Fan-Fest, I suppose it's time we use the right phrase...).

The players, regardless of the outcome of their recent game, are always happy to see the fans. At least they put on a pretty good show pretending they're happy to be signing hundreds of autographs, listening to the same stories over and over again and smiling for countless photos.

I was a bit sluggish getting to the Honda Center, but once I did arrive it was obvious that there would be no time for watching the practice if I wanted to get any autographs as the lines were already beginning to get quite long.

I did, however, take a peak inside at one point to catch the team working on the special teams units. I watched as the power play group was running through a few formations. The basic lesson: cycle, cycle, cycle until someone can pass to Corey Perry parked in front of the net, or Teemu Selanne streaking to the open slot. No surprises there.

Back to my only goal of this day: Selanne. 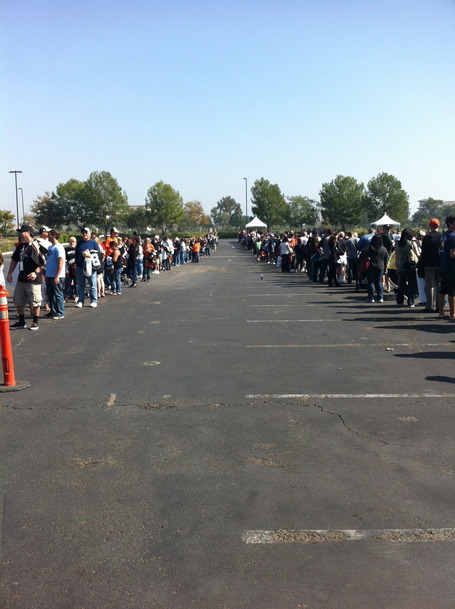 I've always skipped Teemu at these events because his line is always ridiculously long. This time was no different. They put the old man outside, which, for those of you who have attended in previous years, know he's usually inside the building where it's cool and comfortable. Funny enough, the players who were put inside were Jonas Hiller (good thinking to keep the goalie nice and comfy), the young guy, Cam Fowler, and the guy no one really knows quite yet, Kurtis Foster. Not quite sure how baby Duck and the new guy got so lucky.

Anyway, at 10:45 my best friend and I get into line to wait for Selanne's highly sought after autograph. It's at least 200 people deep already, but we agree to wait. Who knows if he'll be back for one more go-around and, admittedly, I've never met him before. We wait outside in the typically way-to-warm-for-October-weather for about an hour and a half. He, as always, arrives late.

Side note to that, apparently Ryan Getzlaf was the first one out and he was early to arrive. Tip of the hat to you on that one, Captain.

When we get up to meet Selanne it's obvious they are pushing people through as fast as possible, to no one's surprise. Handlers be dammed, I only had one goal, and I sure as hell accomplished it. I extended my hand, "I just want to shake the hand of a legend." He puts down his pen, smiles and says, "thank you." Ha! I could cry now just thinking about it. He signs the nifty little picture/post-card things they have at every table, and I'm on my way.

The man has hands the size of a bear, I kid you not. I've never felt so dainty shaking someone's hand in all my life. It's no wonder he's so talented! And, I rarely do this, but I must say...the man is sexy as hell. [Ed. Note: He's like a fine wine. Keeps getting better with age.]

The bestie and I walk around to a few more tents and snap a few photos of players. Most are smiling and happy, but none as much as Bobby Ryan. I overhear him talking with the kids, "Hey, bud! Where do you want me to sign this? I like your hat!" and checking to make sure pictures came out okay, "Did that one come out? Do we need to take another one?". So friendly and welcoming. I feel a budding Selanne in the future. 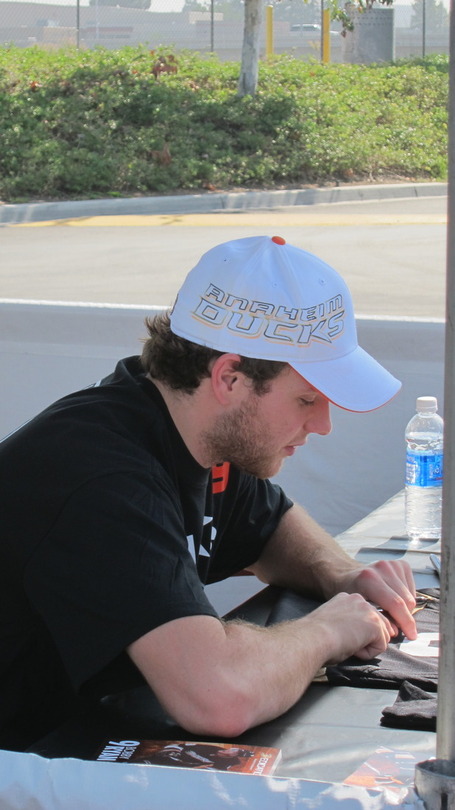 On my way in to see baby Duck Fowler, I stopped and met fellow AC bloggers, Robby and Chris, for the first time along with their families. I also failed to introduce my best friend (I'm terrible at that!).

By the time I made it inside there was little time left and unfortunately I didn't get to see Fowler and Foster before they were ushered away. Foster is a really big guy and, remarkably, so is Fowler.

Overall, the afternoon was fun, as always. Sure Selanne was the only player I met up with, but that's more than ok by me.

I do have one final story. You have to appreciate the new fans who come to events like these. Especially the guy who was waiting in line in front of us to get our nifty "behind the bench" photo taken. The new fan says, "Yea, I got to meet Condor and Smith-Perry." Just in case you're wondering...that would be Andrew Cogliano and Devante Smith-Pelly. As Bobby Ryan might say, "that's an "A" for effort, bud."