Many of you will be happy to know that today's version of the report is not nearly as lengthy as the previous. Once again, I hope Earl Sleek doesn't mind me using his format! Let's get right to it.

MVP: Jason Spezza has a huge week for Platypuslighting with three goals, one assist, four PIM, and fifteen shots.

LVP: Andrew Ladd had a miniscule two shots on the week and did nothing else to help OC Wolverines.

This matchup was a huge deceiver because every category was so close. The numbers for each team were almost identical, but Platypuslighting found a way to barely edge OC Wolverines in numerous categories.

Tied for the first official tie, this match-up was a wash at 4-4!

MVP: Nikolai Khabibulin continues the trend of elite net-minders playing out of their minds as he put up three wins on the week. He also had 1.67 GAA and .951 SV% for Kings of Bedside.

LVP: Patrik Elias had three shots and was goose eggs on everything else for Hockey Heros.

Kings of Bedside got the sweep for goalies and Hockey Heros lost in only one category (PPP) for the skaters as this match-up was even-steven.

The other tie for first official tie, this match-up was even at 5-5!

Blue Stars’ skaters did work and Dynasty H.C.’s goalies kept the team afloat in this tie. Both teams also made two moves during this week.

Natesaduck wins a close one 5-4!

LVP: Jaroslav Halak handcuffed Magumbo Admin H2H in the goalie department as he went winless and posted 4.11 GAA and .867 on the week.

My goalies (I'm Natesaduck, duh) were able to out-perform Carey Price as my victory was based on nothing my skaters did (I’m looking at you Datsyuk -5 and Zetterberg -5).

This one was all about the goalies as Hector Luis Palma swept all four to lead the team to victory.

Easy win for Skate Stompers as I’m pretty sure Getzy15 fell asleep at the wheel this week.

As we get deeper into the season, I'll update you on how everyone is doing in terms of games played projection. For now, I'll just stick with a really bad screen-shot. 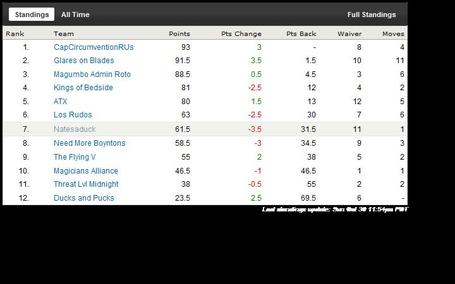 Until next time, you stay classy, AC readers!

[Ed. Note: This weekend, I'm going to put up standings for each league on the home page.]