Now That You're Covering Anaheim, It's Time for Some Truthiness

Share All sharing options for: Now That You're Covering Anaheim, It's Time for Some Truthiness

Since Arthur started Anaheim Calling, the decision was made not to report on rumors. Everyone is welcome to speculate on the rumors in the comments, but you will never see them reported as fact here, at least until they are confirmed by the Ducks. A comment from an "unnamed NHL executive" isn't going to cut it as the truth. In fact, if one of our writers publishes false information, I have given myself permission to exile them to Eklund's website.

BUT...I have to make somewhat of an exception for this. Almost every single media outlet - including Canadian ones - are covering the possibility of Anaheim trading Bobby Ryan. That is as much as I am going to report on it because the Ducks did their best to dance around the issue with Eric Stephens this morning. My kibosh on rumors does not extend to personal observations, though. It starts with: we wouldn't be speculating/gossiping/fantasizing about this if the Ducks, and especially Bobby, were playing well. With one thing going wrong, should the foundation of the team be uprooted? Leadership comes from the top down, but that's just my opinion.

One thing that I noticed all day today is that for the first time, in a long time, the hockey media is intensely following Anaheim. Of course they are, this is a goldmine of a rumor and has "trade of the year" written all over it. The other thing I noticed in the media's reintroduction to Anaheim is that they are are getting some of their facts wrong. That is what's driving me crazy. Not the fact that I think it's a horrific idea trade Bobby Ryan and I am forced to check my phone every five seconds to see if the worst has come true, but the fact that they aren't even reporting correct information.

Fable #1 - Bobby is being dropped in the lineup and given less time as punishment. 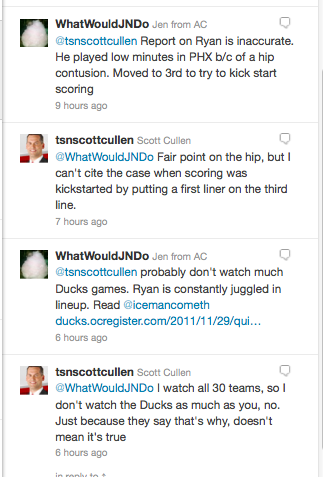 I responded after that with a snarky "this has been happening for three years" regarding Ryan being juggled in the lineup. If you read the story, he didn't change anything after that. It still looks like Ryan is being punished by being given less ice time and by being dropped to the third line. I don't want this to seem like I am a vigilante blogger going up against The Man, but c'mon, at least go back and add a note to your story.

As people that analyze everything Ducks, we know that at one time Matt Beleskey found success with the twins up front. That time has come, gone and is likely never coming back, but Randy Carlyle insists on giving it another try. I like Beleskey, just not very much on the top line anymore. He's a fourth line energy guy.

We preached this over and over last season - consistency breeds results. Saku Koivu and Teemu Selanne took time to get their chemistry back. Not once were they broken up to increase scoring chances. Keeping RPG together is going to continue to re-build their chemistry. Bobby is a notoriously streaky scorer and line juggling won't help. We don't have a third scoring line and seemingly never will. It probably has to do with the "Chris Pronger Curse" or something. The top two lines are going to have to carry the team until the Samueli's are ready to dish out some cash and invest in guys that are better than Ben Maxwell. (Who? Exactly.)

Don't get me wrong, I adore Bobby, but dude was awful at center. For a guy that has so many natural talents taking faceoffs and covering all areas of the ice is not one of them. To end last season, Bobby had 87 faceoff wins and 132 faceoff losses for a lovely 39.7%. There is a reason that the great "Bobby at center" experiment ended about a quarter of the way into last season. He is a winger through and through. He needs to be either floating near the boards or parking his derriere in front of the net. Next they're going to be telling me that Andrew Cogliano is an All-Star center too. Makes sense since he was put on the left wing...say whaaa?

Fable #3 - Bobby is on the FIRST power play unit

This one isn't nearly as annoying as the other two. One cannot report that Bobby Ryan can't score on the power play when he's surrounded by his usual line mates. Anyone that has watched more than 10 minutes (ok, maybe 40 minutes) of a Ducks game will know he is replaced by Teemu Selanne on the power play's first unit. It is not at all appropriate to classify him as underachieving on the power play when the first unit usually does the damage before he steps on the ice.

As a Ducks fan, these passing weeks have been incredibly trying. Something has to give, but at what cost? There is a reason why Brian Burke took Bobby as his number two pick in the draft. I drank the Burkie Kool-Aid and believe that he's got a pretty good idea of what will make a player and a team successful. I'm sure he'd love to get his hands on Bobby now - which is all the more reason that the Ducks need to keep him. Oh and if I were Bob Murray, I'd be shopping Getzlaf. He's reached his peak and has nothing left to achieve.