[Ed. Note: Every day this week, the AC Staff and a few Duck Buddies will be giving each other Ducks related Secret Santa gifts. Now up, Battle of California cartoonist (and occasional Ducks blogger) Earl Sleek.]

Merry Duckmas, everybody! This is actually my second straight year participating in the ACSS, and just like last year, I somehow got assigned AC's headmaster -- last year Arthur, and this year Jen.

So Jen, in the spirit of holiday inventiveness (plus a crippling laziness when it comes to web hunting and other such tasks), here's your completely made-up gift: 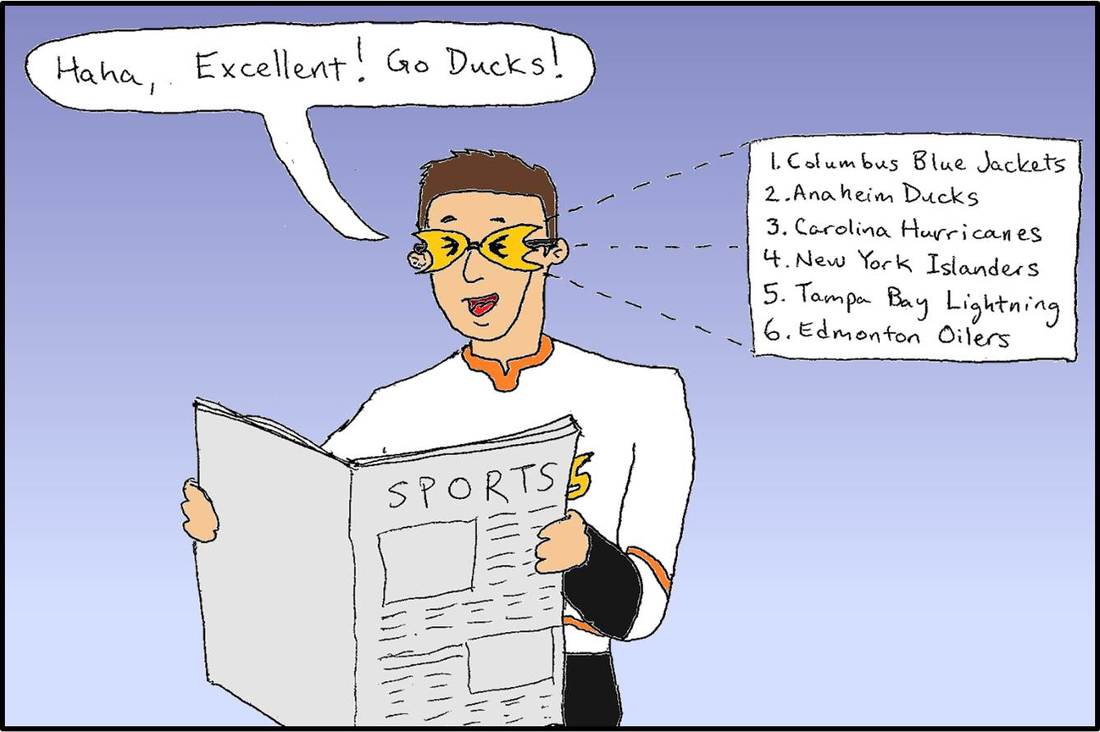 Too good to be true? You betcha! But read on anyways!

Unfortunately, NHL medical staffs have been forced to learn way too much about concussions over the past decade, but there is one upside -- now some of the findings can be utilized in the league's merchandising efforts. Player baseline testing has shown that certain hits to the head can cause severe disorientation, specifically a subconscious re-ordering of lists. And while scientists are at this point unable to correct such a brain scramble, they have figured out a way to artificially re-create those concussion symptoms with subsonic pulses aimed directly at a person's brain.

Exciting, right? And now they've even put such futuristic science into a sleek pair of team-themed glasses! Put them on, wait two minutes, and voila! Every list will suddenly appear in reverse order for you. Thursday will be followed by Wednesday; Scorpio will be followed by Libra; the NHL will be the first sport featured on ESPN's SportsCenter, etc. And the best part is: the Anaheim Ducks will be right near the top of the NHL standings! Woo hoo!

Sure, there's drawbacks -- there will be some permanent damage to the brain, for instance. But ask yourself this -- how damaged will you be as a Ducks fan if you keep reading the non-altered NHL standings throughout this season? Isn't that sort of a wash? Also, it is definitely recommended that you not wear these glasses while driving -- you will run every red light you see.

It's not a perfect gift -- I should have made up a cryogenic coffin that puts a Ducks fan in deep freeze until a computer notices that the Ducks have a record above .500, but sadly fake-science hasn't developed all those technologies yet. Keep at it, pretend scientists! :)