AC's Secret Santa: Shopping for Robby is Hard (from Daniel)

Share All sharing options for: AC's Secret Santa: Shopping for Robby is Hard (from Daniel)

[Ed. Note: Every day this week, the AC Staff and a few Duck Buddies will be giving each other Ducks related Secret Santa gifts. Now up, the second half of AC's dysfunctional duo, "Get off my lawn" Daniel gifts Bobby Robby Ryan.]

If my hate of Bobby Murray is easily and readily knowable, then so to is Robby's love of Bobby Ryan. Far be it for me to judge the feelings that Robby has for Bobby; I'm sure I at one time held a similar sentiment for Teemu during his first go round with the Ducks. However, we all know how that turned out. I'm looking at you Gauthier. Still, with all the rumors swirling around Bobby Ryan just s a few weeks ago, and the Ducks ever spiraling decent into the depths of the NHL standings, I wanted to prepare Robby, should the worst happen. That's why I got him this get out of jail free card so that he can return to his family after he kills Bob Murray. 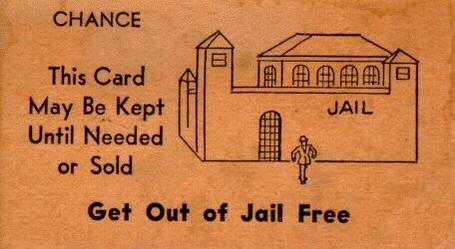 I originally wanted to transform this into some kind of fancy card that would allow Robby a one-time void of any Bobby Ryan deal, but I'm as computer literate as my students are real literate. I also thought that it would be really impractical since, as fans, we'd never be allowed to voice our opinions on what we think this organization should do. Still, I think I've got Robby's back on this one. Murray will inevitably get hosed in a Bobby Ryan trade, and Robby will inevitably, and maybe rightfully, kill him for doing so. Therefore, I got Robby this fancy get out of jail free card. I chose this one because the jail kind of looks like a mental institution, which is the other possible destination for Robby after such a trade. Merry Christmas Robby, here's to hoping Bobby Ryan can stay a Duck for at least one more season!

P.S.: Dear Mr. Murray, these posts are meant to be humorous. I'm sure Robby would never due anything like try to kill you. However, should you trade Bobby Ryan, I am not libel for any season ticket canceling, picketing, or any other bodily harm that the fans might do to you...just saying.