Share All sharing options for: AC Secret Santa: A Federal League Christmas for Alex (From Chris)

[Ed. Note: Every day this week, the AC Staff and a few Duck Buddies will be giving each other Ducks related Secret Santa gifts. Next up, the hockey-dad-to-be Chris and his gift for our Duckling Buddy and Chief Crunchologist, Alex from CHGA. ] 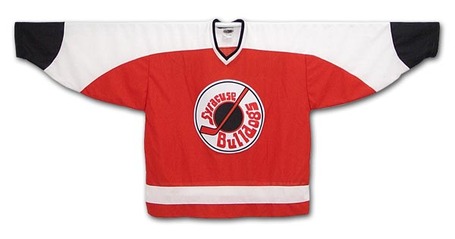 When I drew Alex for Secret Santa, my first thought was that I wouldn't get her anything Ducks related for two reasons. First, she isn't a Ducks fan by nature, which is a gift in and of its self this season, and second, because the Ducks aren't in the habit of hanging on to their AHL affiliates for much longer than a Christmas tree will stay fresh in your living room.

When thinking of Syracuse and hockey gifts, my mind immediately turned to the 1977 cult classic Slap Shot. The film was partially shot in Syracuse and in the epic climax the Chiefs take on their hated rivals, the Syracuse Bulldogs. Naturally a Bulldogs jersey is the perfect gift for the die-hard Syracuse hockey fan.

But whose jersey should it be? Ogiltorpe? (Thorp, Ogil-THorpe) No, too obvious. Andre "Poodle" Lussier? The movie comes right out and tells me "Not Poodle!" Plus who could support Poodle while he lives in semi-seclusion in Northern Quebec after the unfortunate Denny Pratt tragedy?

Clearly the only option was Tim "Dr. Hook" McCracken or, as Reg Dunlop called him, "The coach and chief puck of that Syracuse team." As legend has it he was so named because of his scalpel like prowess with the stick and he has been known to carve a man's eye out with the flick of his wrsit. If that doesn't get you in the Christmas spirt, I don't know what will.

So there you have it Alex, your very own Tim McCracken jersey, as a nod to Syracuse's unique place in hockey lore and something spiffy to wear around the rink for some street cred.