I have not had the pleasure of meeting Chris personally, but he has documented his hockey-related likes and dislikes in various places on the interwebs. He's cool because his hockey fandom predates the Ducks (if you read his SB Nation bio, you'll learn that he became a hockey fan after watching the 1993 Stanley Cup Finals). And like me, he's also a fan of the NHL in general. 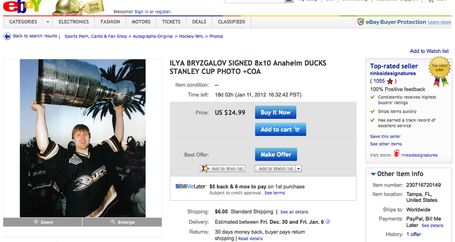 As you can see, it's a signed photo of Ilya Bryzgalov holding the Stanley Cup in 2007. Why Bryz? He was a backup goalie then, and he's not a Duck now. But Chris knows why I chose this. As an NHL fan, he knows that Bryz - king of the rambling rant - is the breakout star of HBO's 24/7 Flyers/Rangers: Road to the Winter Classic. And the picture reminds all of us that we were the first California team to grasp Lord Stanley's Cup. Something that Gretzky's Kings couldn't do. It reminds us of a time when we actually, you know, won things.