Over all the years I've been watching the Mighty Ducks and Ducks, this is the one image that I remember clearer than all else: 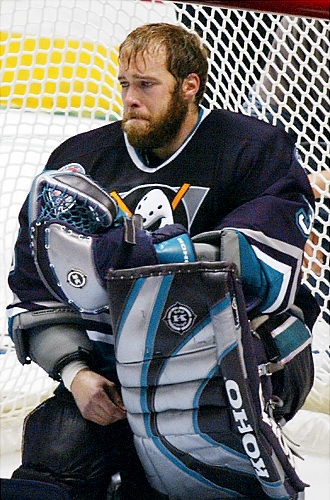 The 2003 Mighty Ducks had just lost the 7th game of their fairytale run to the Stanley Cup Final. I was 20 at the time, sitting with my roommate from SDSU (a Kings fan) in the Pond watching the game on the jumbotron. As the seconds ticked down, sealing the Mighty Ducks fate on this incredible run, the camera was not on the men celebrating their Cup win, but on Jean-Sebastien Giguere. As the tears streamed down his face, I felt myself get choked up and the tears well up in my eyes. I wasn't heart broken that my team lost the Stanley Cup, but that he couldn't close out the fairytale with "happily every after". When he accepted his much deserved Conn Smythe trophy, everyone that was left in the Pond was cheering as they dabbed at their eyes. It was one of the most incredible moments I'll never forget.

For the first time since the trade that brought Jason Blake and Vesa Toskala from Toronto to Anaheim in exchange for J.S. Giguere, Jiggy is returning to where he made his home in our hearts for years. He brought us to our first appearance in a Stanley Cup Final and anchored us to a Cup win in the second. The latter is much more remarkable considering the one thing he couldn't control, the health of his first born Max, was in jeopardy. To carry that weight of uncertainty and emotion into the 2007 SCF where a redemption from 2003 was in order, is incredible. It's no wonder that many fans want his 35 to hang in the rafters next to 8 when it's all said and done.

In an odd twist of fate, Jiggy and his Avalanche teammates will be facing the Ducks and the man that effectively cost Jiggy his starting job - Jonas Hiller (I think he's starting). I expect nothing but a roaring welcome from the fans at the Honda Center tonight. If you're in arena, a video tribute will play during the first TV timeout of the game. (No word if Prime Ticket won't cut to commerical, a la Teemu in Winnipeg.) This is one of those weird games where I hope the Ducks win, but only 1-0.

Feel free to share your Giguere memories in the comments, and join me in saying, "Thanks, Jiggy."