ROBBY:
One of the perks of having a newborn is that I no longer feel like a creep attending the annual Wild Wingers Kids Club party at Knott's Berry Farm. While you don't actually have to have a kid to sign up for the fan club, it's probably really only worth it if you do. Either that, or Rebecca and I found some mysterious loophole last year when we were able to attend. 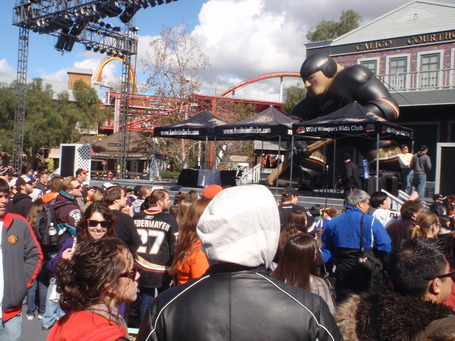 This year's party was held on Saturday at Knott's Berry Farm, just like last year's. What follows is a detailed rundown of the event with pictures and videos.

To start off, the party is basically a glorified meet and greet with the players. Sure, you get a full-day pass to Knott's Berry Farm, but at 26, that doesn't really do it for me anymore. While the park opens at 10, festivities for Ducks fans don't really kick-off until 1:30 p.m., when the Q&A begins.

Trevor, Rebecca, my parents, and I arrived at Knott's around 12:15. According to the Kids Club people, you have to check-in by 1 o'clock to get your tickets and to get your signature voucher (more on this later). Having gone last year and being thoroughly unimpressed by Knott's, we decided to sleep-in this year and just head out for the Ducks part of the activities. 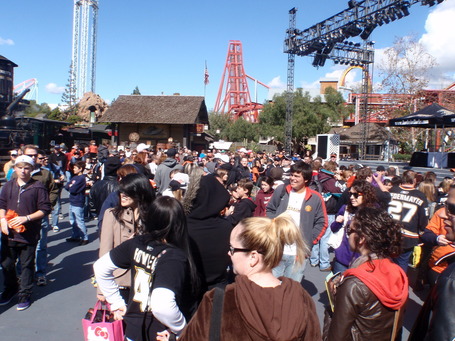 After entering the park, we headed straight back to Calico Square, which is basically a large event space in the middle of the park that has a stage and benches. We scoped out some prime bench real estate under cover (it never did rain, but we were prepared parents) and we waited for festivities to begin as more and more Ducks fans began to fill the square in advance of the event.

As more and more Ducks fans filled the square, a Kings fan with apparently nothing better to do on a Saturday afternoon decided to start making passes through the square and heckling the crowd. Whenever people started to notice him, he gleefully turned around and pointed to the "Duck Hater" nameplate on his jersey. Jersey Foul aside, I'm not sure why on earth anyone would think it necessary to try to get over at a Kids Club event for a team that's not really your rival. But I digress. 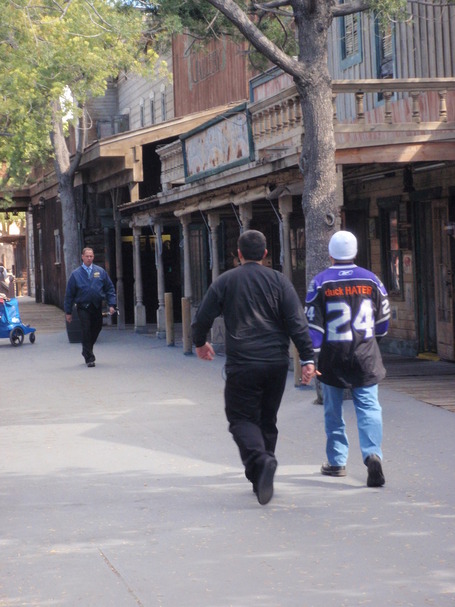 Soon enough, Dan Wood took the stage and ran-down the day's activities. He also made the sad, but expected, announcement that Jonas Hiller would not be at the event, despite being the Kids Club captain (last year's captain was Corey Perry, and it looked like he hated every minute of it when he was there). Even though Jonas wasn't there, the Ducks did give-out two autographed paddles as prizes to Jonas trivia questions, which I thought was a nice gesture.

Wood then introduced the four players who were present: Cam Fowler, Luca Sbisa, Dan Sexton, and Brandon McMillan. Francois Beauchemin showed up after the Q&A, but just in time for the autograph session.

At this point, Wood asked each of the four players a question, before taking questions from kids who had lined up on the side of the stage. You can watch the video below for the full Q&A, but here were some of the highlights:

Those are just some of the things I remember off the top of my head. The video below has everyone's responses.

After the Q&A, the five players broke-up into three separate tables. Sbisa and Sexton comprised the blue table, Beauchemin and McMillan were at the green table, and Cam sat with Wild Wing at the yellow table.

I mentioned the autograph vouchers above, and this is where the colors come into play. Bascially, each person is given a different colored voucher when they check-in out front. While this prevents general chaos from allowing people to stand in any line they wish, it also sucks if you really were hoping for a certain person's autograph, but didn't have the right voucher. To combat this, I recommend roping your friends into coming (you can pick up a Kids Club pack, which includes admission, for $15 each the week before the party) so that you can make sure you get enough vouchers to cover everyone. As with most autograph events, each player only signed one item and they did have photo cards available if you didn't have an item to be signed.

Personally, we got everyone to sign Trevor's jersey and we also managed to sneak an extra signature from Luca on our Olympic puck from Vancouver. Cam Fowler was nice enough to take a picture with me and Trevor and from what I hear, the players were all fairly genial. 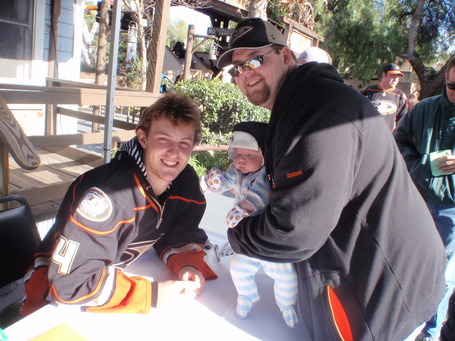 I want to take some time here and throw out a special thanks to Wild Wing. I was wondering why the Fowler line was taking so long, and it's because Wild Wing was hamming it up with anyone who would play along. He took time to take multiple pictures and mess around with just about anyone, and he even sat down to hold Trevor while Rebecca took like a million pictures. I know a lot of people here could probably care less about fan interaction from our mascot, but the Ducks do a great job with Wild Wing. When and if you have kids, you'll appreciate how they use him that much more. 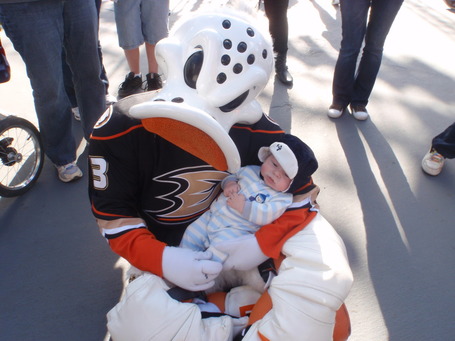 Overall, the event was a success. While I was really hoping Jonas would be there (I've wanted his autograph on my Hiller jersey for some time), the Ducks did a good job of managing personnel in his absence. Sbisa, Fowler, and Beauch were clearly the fan favorites, but McMillan and Sexton handled the event well (I believe this was Sexton's second year at the Kids Party). I have issues with the way the autograph event is structured, but I also understand why they organize it that way. In an effort to balance player availability with the typical patience of most kids, some sacrifices have to be made.

As promised, here are videos of the complete Q&A: