Your Enemy: On the Forecheck

The Ducks may have fallen ass backwards into it, but their quarterfinals now boil down to a three game series, a rubber match series following the opening four contests, with two games at home.

I commented sarcastically on Jarko Ruutu's hit on Martin Erat, but not because I have no sympathy for Erat. I assure you I do. I've simply grown tired of how little of the ink spilled on this series is covering the actual hockey games. After bowing to the discussion of Bob Murray's comments, I again prostrated before the discussion of the Ruutu hit.

In theory, the freedom of the blogosphere should allow me to develop my own talking points, but I've been frustrated by the itch to respond to the nonsense as much as I've been flat-out remiss.

So, what would I talk about if I didn't have to address Bobby Ryan's stomp, Jarko Ruutu's hit, the accusations of 'Dirty Ducks,' and Bob Murray's comments on the officials being grifted by the opposition?

The absence of Jonas Hiller.

Here's a Ducks team that could barely stay competitive without Jonas bailing them out of 40+ shots-allowed efforts, a team that was severely lacking in chemistry and consistency. Make no mistake, they didn't get here without him. Hiller could not be there for the stretch run, but he stole wins that made the last minute comebacks to end the season relevant. They haven't been better off without his contributions.

I don't know if Pekka Rinne stole Game 1, but I do know that the Ducks entered this series without the threat of stealing a game of their own, as the masked and padded larceny that defined the first half of their season sat with vertigo. And yet, here they are, in the playoffs, 4th, and 2-2 after watching the Nashville netminder take an early rest.

P.S., in terms of trash talk, refyousuck.com requests you all print this out for the game . . . 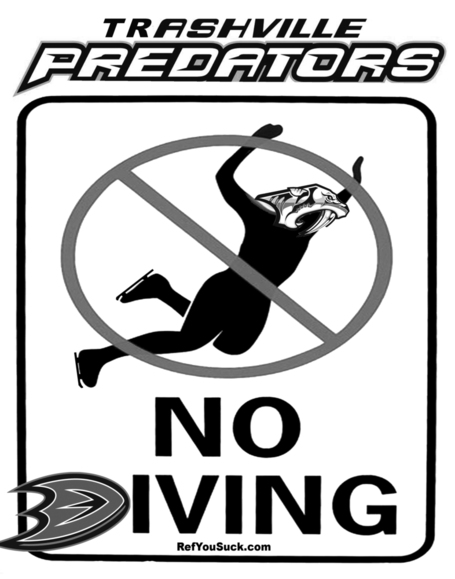