ROBBY:
Yesterday, the Anaheim Ducks held their annual Select-A-Seat event, where season ticket holders are given the opportunity to upgrade their seats. Although that's ostensibly the main draw to the event, the Ducks always open the festivities with statements about what's new at Honda Center and with the team. 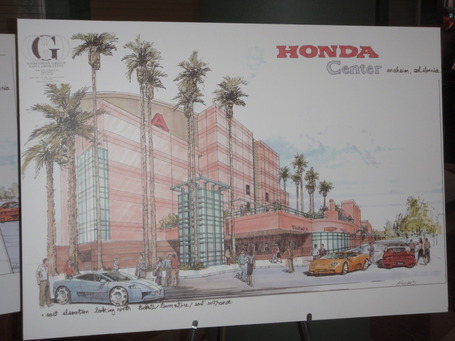 An artist's rendering of the new east entrance for Honda Center. Apparently we'll all be driving Italian sports cars when the upgrades are completed.

Join me after the jump for info about Teemu Selanne, Paul Kariya, and what Bob Murray sees as the biggest need for the Ducks this offseason.

Dan Wood MC'd the speaking portion and pimped the Ducks Scandinavian oddysey upon which they'll open the season. Wood mentioned that the Ducks are organizing a Road Crew trip for this event that takes you to all three games and also grants you an exclusive meet and greet with the players and coaches after one of their practices abroad.

Wood then went on to introduce a new column at the south entrance with a Ducks Dedication banner wrapped around it. Wood said that the team will be allowing fans to somehow get their names on this column so they can be part of Honda Center. I didn't get all of the details, but this sounds like some kind of engraved plaque or something that will go on the column.

Tim Ryan was up next, talking about what was on the docket for Honda Center:

At this point, Ryan turned the mic over to Murray, who went through some canned information before taking a few questions from the audeience:

After escaping Murray, I went to the 400 level to look for new seats. We moved one section closer to center ice (really just across the aisle) and maintained our aisle seat while moving up a row. If you're at a home game next season, come track me down in 410 Row Q, on the goal end of the section.

Once we had our seating situation figured out, I snapped some shots of the artist rendering's for Honda Center's additions. 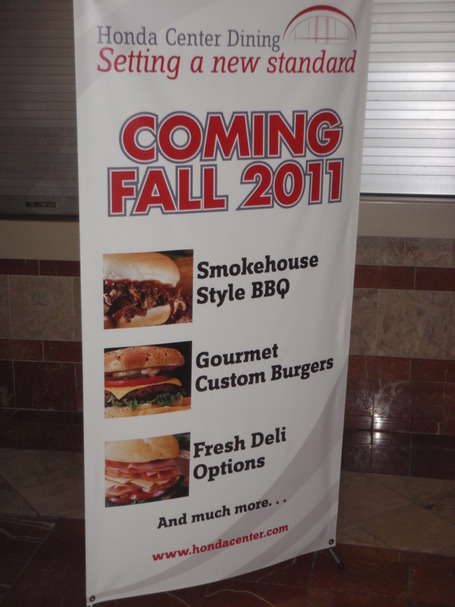 Yay new food! Some of this better be available for the unwashed masses in the upper bowl. 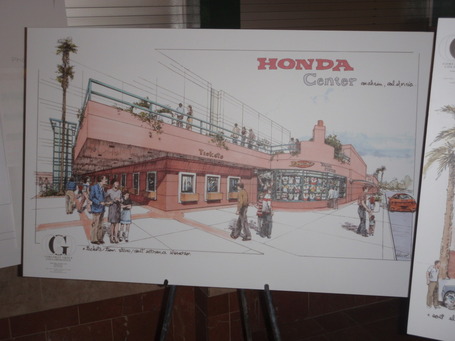 Another view of the east entrance. Check out the new team store. 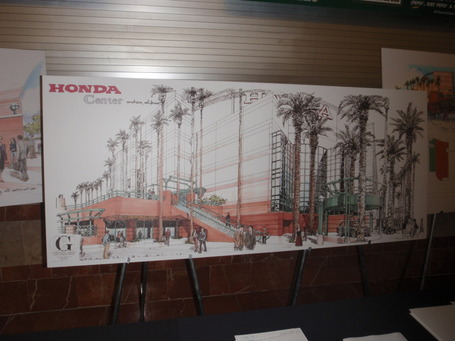 You guessed it, east entrance again. Note the club-level access. 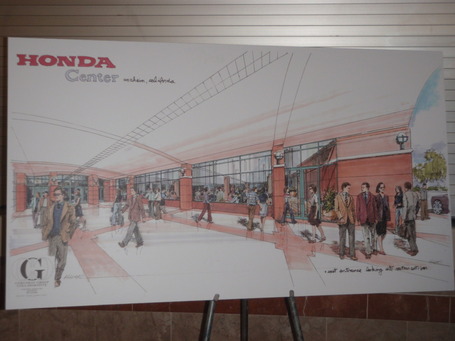 An "interior" look of the new east entrance. 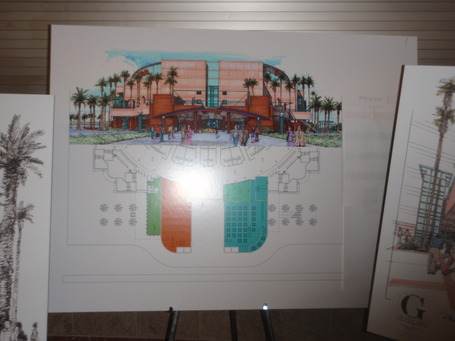 A combination rendering/blueprint of the new east entrance. The orange portion represents the new team store while the blue represents the sports bar.