All along I had planned for this post to be a recap of the hi-jinx at the annual Fedorin Cup. Last year, we saw Bobby Ryan and Ryan Getzlaf take to the ice. This year, the biggest stars looked to be newly retired Ducks center Todd Marchant and LA Kings forward (former Duck) Dustin Penner. Then the rumors started, fueled by the Ducks website, that one Teemu Selanne would be making an appearance. Knowing that he had knee surgery back in June, I assumed that Teemu making an appearance at the VIP festivities later that day - not actually playing in the game - even though he had been skating back in Finland.

After winding through Anaheim ice, amongst a crowd twice the size of last year's, I was greeted by a big Finnish smile skating through warmups on the ice. I could barely get my phone out fast enough to take this picture, so I could prove to the world that this wasn't a mirage: 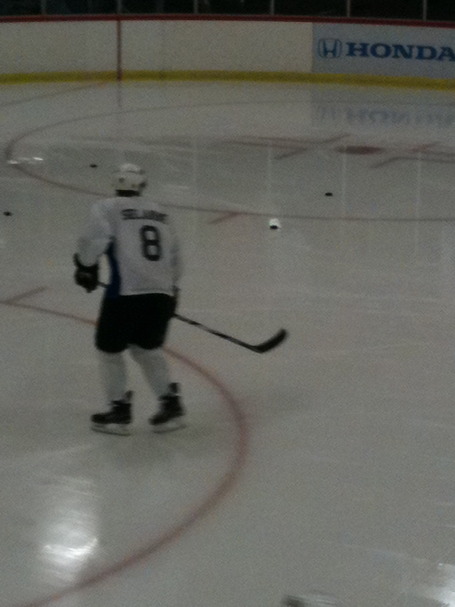 Having no inner monologue at this point, I looked at the girl behind me in line and said, "Well, you have to believe that if Teemu is playing here, that looks good for his chances next season." I don't think the girl really listened to me because she responded with, "Yeah, same for Todd Marchant." Huh? I didn't want to break her heart by telling her that Marchant was definitely retired.

Anyway, I quickly found a seat at the opposite side of the arena. I was desperate to watch every move that Teemu made. Of course, as soon as I sat down, the players left the ice. Listening to everyone around me, the buzz was entirely about Teemu. Shouldn't be surprising, though. In addition to Selanne, Marchant, and Penner, there were very few players that I had actually heard of. Some of those include: former Mighty Ducks Dave Karpa, Jason Marshall, Sean Pronger, and JF Jomphe, and current Ducks' prospect Jake Newton (shown here in a shoot out).

The teams came back out on the ice for introductions by Ducks PA Announcer Phil Hulett. After the usual other introductions, it was time for Teemu. The cheers were loud, and the chant of "One more year" echoed throughout Anaheim Ice. Half the arena (including myself) was standing. Smiling, he gave a little wave, and started to chat up Marchant, standing to his right. He wasn't the team captain (Marchant was), but Hulett kept calling him the captain. Even made him take the ceremonial face-off. All that stuff was great, but what I was interested in was his first shift.

Here is Teemu's entire first shift (including a mastering of the worst face-off ever):

Even at 1/8th the speed of the NHL, Teemu was far and beyond faster than EVERYONE. I saw no hesitation to fly up the ice. I couldn't see him favor either knee. There was no wincing in pain or substantially long waits between shifts (or missed shifts all together). Here's another shift later in the game:

Yes, it is a charity hockey game, not practice or a real scrimmage, but I was encouraged. How could you not be? At 41 years old, he's just barely over two months since his surgery and he's on the ice. Also, it's very clear that Teemu really is still having fun. He shared in the joy as he fed tons of passes to his Joe Schmoe teammates, and was just as elated when they scored. (How cool is that? Teemu Selanne feeds you a pass in a game!) He even indulged the fans at the end of the game quickly taking his turn in a shoot out, and flipping his stick upside down.

OC Register columnist Randy Youngman spoke with Teemu on Saturday before the Fedorin Cup. Based on that article and what I saw at the charity game, I have to believe that Teemu will be back this season. He knows his own body, and as he said in the Youngman piece, he knows there is limited time before his entire knee blows out. He wouldn't play in a cakewalk game if he didn't trust his repaired knee.

At the end of this upcoming season, the CBA expires. It's waaay too early to speculate on the possibility of a lockout, but it does give Teemu a window of opportunity that compels him to act. Lightning doesn't strike twice. The Ducks aren't going to get another crack at a fully healthy Teemu after a lockout, and Teemu will be 42 (43 if there is a lockout). I can't imagine that Teemu would be happy hanging them up early without knowing if he could make it through another season. He is not the current incarnation of Mike Modano. He can still play, even on a bum knee that's been bothering him for a couple seasons now.

Of course, this is all speculation. Who knows what is going on in the mind and body of Selanne. One thing I can hope for before camp, is him getting back on the ice with Getzlaf, Ryan, Corey Perry, and Saku Koivu. Those are the guys that remind him how much he loves playing hockey and how much fun this team is. Pain is always going to be there as he continues to get older, but having this group of guys isn't. This truly will be Teemu's final season. I'm excited to get it started, even though I know what happens at the end. Now we just have to wait for him to make the decision.