Share All sharing options for: Eight Reasons I'm Looking Forward to the Season

Today many Anaheim Ducks season ticket holders received their actual tickets for the 2011-2012 season. As a full season ticket holder (Section 410 represent!), I always look forward to the day I get my tickets for the upcoming season. The Ducks typically ship their tickets in some type of collectible satchel, and this year's iteration (seen below) is my favorite thus far. 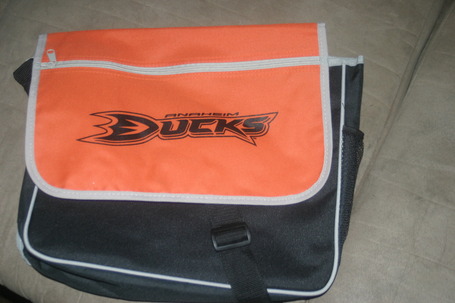 The other fun thing about getting my tickets in the mail is checking out the tickets themselves. If you've never seen a Ducks full season ticket holder book, it's basically several perforated sheets of tickets (five-wide). Two years ago, the Ducks printed elaborate game scenes that spanned the entire width of the ticket books while last year the Ducks featured fans on each ticket. This year, the Ducks have split the difference, showing game and player images on each ticket. There is also the curious addition of modified QR codes that promise special game previews and other information available via smartphone. 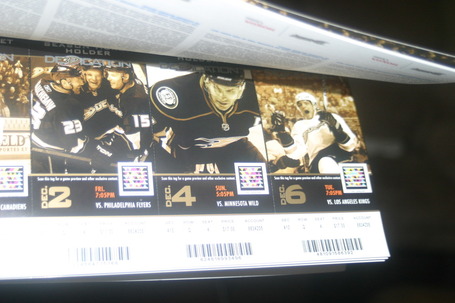 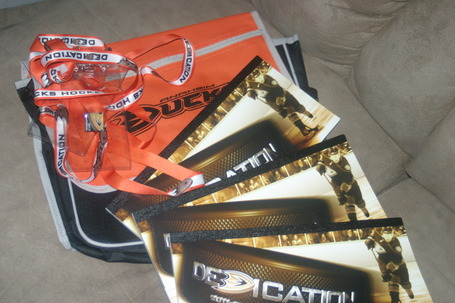 While this feels like Christmas in September, what it really means is hockey season is upon us. Join me after the jump for the eight mostly serious reasons I'm looking forward to the season.

8) The NHL is going to get more attention than ever

Between NBC's new deal with the NHL and the much larger issue of the all-but-guaranteed NBA lockout, the NHL is poised to command more attention this season than it has in many, many years. Even though ESPN lost out on its bid for the NHL's TV rights, they'll need content during the week (the World Series of Poker and 482 NFL shows can only take them so far) and the NHL should receive more highlight coverage and analysis from the Worldwide Leader in Sports this season.

Count me among those that believe the Sharks and Kings have significant obstacles to overcome this season before they can claim their anointed status. For the Sharks, they will have to learn how to win with a reduced offense. There were a few stretches last season where the Sharks struggled to score goals and the results weren't pretty (i.e. the span from January 3rd to January 13th where the Sharks lost six straight games while scoring a total of only 8 goals). Replacing Dany Heatley's and Devon Setoguchi's combined 48 goals and 105 points could be difficult. Although Havlat and Burns did account for a combined 39 goals and 108 points last season with the Wild. At any rate, gelling as a team could be a tall task for the Sharks.

The Kings also experienced some significant roster turnover and the ongoing Drew Doughty saga makes me giggle with delight. As a defense-first team, losing Michael Handzus and Wayne Simmonds, both of whom faced moderately high quality of competition while enjoying a majority percentage of defensive zone starts, could cause the Kings some issues. While the addition of Mike Richards certainly will give the Kings some added firepower, the team will have to slightly adjust its personality to cope with the new personnel. Although I expect both San Jose and Los Angeles to make the playoffs, I think that both teams will get off to slow starts as they adjust to their new realities.

While the odds seem to be on Devante Smith-Pelly opening some eyes this year, I actually think that several of our kids could bust out in a big way. Brandon McMillan experienced surprising success last year and both Matt Beleskey and Dan Sexton, both of whom have shown flashes of brilliance at times, figure to have more consistent roles on this teams. Especially if...

The acquisition of Andrew Cogliano and GM Bob Murray's comments throughout the off-season have shown the team believes it needs contributions from the third line in order to be successful. A cursory glance at the roster makes it clear that the Ducks don't have the personnel to field a defensively minded third line, so it would seem to be a foregone conclusion that the Ducks will commit to offense on their third line.

There's no arguing that Detroit continues to get older and without the safety blanket of Chris Osgood, Jimmy Howard is in a make-or-break season. Nashville hasn't done much to better itself this year and Phoenix has also lost key pieces this off-season. I'm not even particularly convinced that the Canucks will once again be the top of the class in the West, but I do firmly believe that the Western Conference will be more wide-open this year than it ever has in the past. St. Louis and Colorado both made aggressive moves (that may or may not pan out) and Minnesota appears set to adopt a new approach. The same old assumptions about the easy wins in the Western Conference should crumble this year (except for you, Edmonton. Sorry).

Last year, you could just tell that the guy just wasn't right. The normally affable Hiller seemed unusually reserved and gloomy in interviews and his limited performance late in the season was an abject disaster. This off-season, though, it appears that Jonas has turned a corner. He's done interviews where he sounds optimistic again and even Murray has said that Jonas sounds more like himself this year. Some time with mentor (and former Ducks Goaltending Consultant) Francois Allaire should further re-energize Jonas and get him back to the ridiculous form that earned him an All-Star nod in the first place. Jonas has already said that he'd like to make it back to the All-Star Game this year, but something tells me the Ducks won't be letting Jonas make the trip to Ottawa, even if he's selected.

Perry's career progression continued in his fifth year and I expect the same for Bobby. Given the attention Perry has received for the MVP, and Getzlaf's cemented status as an elite player, it seems like Bobby should receive the least amount of attention while he's on the ice with the twins. This should give Bobby plenty of opportunities to finish and if he doesn't hit 40 goals this year, I'll be stunned. I fully expect Bobby to crack 80 points this year, even while getting second-unit PP time. In fact, among the league's top goal scorers (those with 34 or more), Bobby enjoyed less average PP time than everyone but Michael Grabner.

Could there be a more fitting end for the Finnish Flash than a season that begins in Helsinki and features the first professional games in Winnipeg since 1999? As we know, Teemu did simply ridiculous things last season and I completely expect him to make one last tour of the NHL before he finally bows out. At 637 career goals, a decent season could see Teemu crawl up the all-time list. Depending on what Jaromir Jagr does this year, Dave Andreychuk (640), Jagr (646), and Brendan Shannahan (656) all appear within reach. A season like last year (where he notched 31 goals) would tie him with Luc Robitaille (668). At any rate, I fully expect Teemu to play his heart out once again this year and enjoy one last brilliant run with the Ducks.

So there are my 8 reasons I'm looking forward to the season. What about you?