Day 1 of Camping with The Ducks

Share All sharing options for: Day 1 of Camping with The Ducks

I was excited and couldn't sleep. I woke up before my alarm went off. I had more than enough energy - without caffeine - to churn out a post in the early hours of the morning (a feat during the work week I would be hard pressed to do). I used act this way before the first day of a new school year, but why would I feel this way now? I certainly wasn't like this last training camp after the Ducks missed the playoffs.

Perhaps it was the feeling that the 2010-11 team had so much more to offer, only to have it cut short by a stellar defensive effort (and at times, monster goaltending) from the Nashville Predators. Maybe it was the MVP season from "The Little Pest That Could" in Corey Perry. Or the decision by the White Knight (Teemu Selanne) to ride back into Anaheim and save the team from utter chaos, just one more time. Something about this team felt different, yet comfortably the same.

For the first time in as long as I can remember, training camp was held at Honda Center instead of the usual Anaheim Ice. Bob Murray wanted to move more practices to Honda Center in order to utilize the updated dressing rooms and weight rooms. The move seems to have paid off for the fans, as approximately 1200 fans (according to the Ducks) loaded into Honda Center to watch the team practice. I liked being able to sit in an actual seat, but I was slightly bummed by the move away from AI. I always thought it was cool to watch the players walk through the stands and down to the ice in the practice rink. You were much closer to the action, but no big deal. At least camp is open to the public, right?

(One thing before I get into the analysis, if any of you see people in other teams jerseys at camp, shut up. Don't be an idiot and start yelling thing at them. I saw this several times today and I was annoyed. We're already disliked across the league. Don't give them ammo by being a jerk.)

Moving on. With the expanded roster for camp, the team was split into two groups. First up after the jump is Group A. 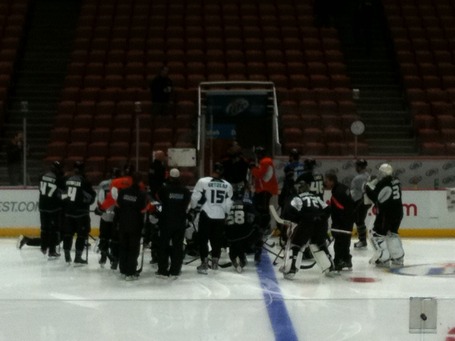 (I apologize in advance for today's photos and videos. I forgot my good camera and had to use my iPhone. I promise better pictures and video for Sunday and Monday.)

Group A and my notes on them are as follows:

-- This was the first time I saw real leadership by Getzlaf when working with the rookies. Rickard Rykell was having a tough time picking up on a drill. Getzy went over and walked him through it a couple times.

--Speaking of Getzlaf, he was already in midseaon form by skating a majority of practice at 3/4th's speed. The only time I saw him really hustle was when he and Perry were chasing each other for a puck (in which Getzlaf won).

-- Devante Smith-Pelly is gigantic. He's not quite as tall (or chubby) as Dustin Penner but he's a big kid. His straight line speed for a guy his size is pretty surprising. I was watching his footwork during a skating/breakaway drill and he looked a little clumsy.

-- I didn't see who it was, but someone blindsided Perry and he fell awkwardly on his shoulder. Normally this wouldn't faze Perry, but he was slow to get up. I can tell you that the arena got pretty quiet while he was on the ice.

-- Iiro Tarkki has holding his own out there, for the most part. The first couple shots he faced against Getzlaf and Perry he looked like he was wincing in anticipation of the bullets about to be shot at him.

-- I couldn't understand 98% of what Randy Carlyle was saying on the ice. He sounded like the adults in the Charlie Brown cartoons. Of the 2% I could make out, the funniest thing I heard him yell was, "GOOD JOB, SEXY." I know it was for Dan Sexton, but it was funny coming from Carlyle.

-- Jason Blake looked to be the odd man out amongst the guys. He was overly aggressive during drills by trying to slam his teammates into the boards. He would take swings and chops with his stick on the goaltender until his puck went in the net, even if the goalie was trying to focus on the next guy coming down the ice.

-- This group was kind of boring, even if it did have Getzlaf and Perry. I'm hoping tomorrow is more exciting. To end each group's session is a conditioning skate that I would have made me barf, had I had to do it after a long practice:

Group B yielded much more excitement from the crowd, thanks to having Teemu Selanne AND Jonas Hiller. Both players received standing ovations from the crowd as they took to the ice. 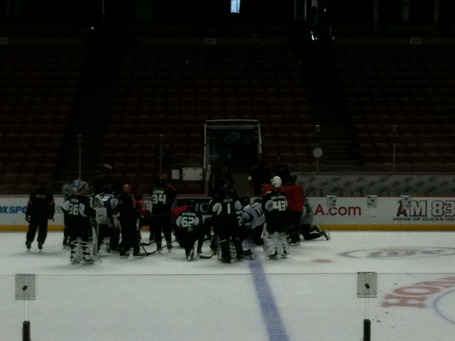 -- Matt Beleskey, Toni Lydman and Matt Kennedy (all in red jerseys) were on the ice, but are still recovering from injuries. For the most part, they participated in a majority of the skating and shooting drills, as long as they didn't involve contact with other players. Beleskey looked slimmer and faster.

-- Do you remember the scene in D2: Mighty Ducks when they introduced Julie "The Cat" Gaffney? She was stopping everything effortlessly. Yeah, that was Jonas Hiller today. The guys weren't going at him like it was a game, but still they were firing on him and he stopped pretty much everything without much effort. Really hard wrist shots would hit his pads and instead of ricocheting, they'd fall flat to the ground. Can't help but be encouraged by that.

-- It was great to see Teemu's giant grin on the ice. We got a little nervous when he left practice about 20 minutes in and headed back to the locker room. I didn't watch much else because I was hoping and praying he would come back out, and he did about 10 minutes later. I thought he might take it easy on the skating drills the rest of the day, but I was wrong. See the breakaway/skating drill thing versus a 20ish years younger Nick Bonino. Not bad for a 41 year old coming off knee surgery.

-- I was a little worried about Bobby Ryan going to Idaho for the summer and coming back looking like an actual mid-westerner. I needed not worry because he looks in shape and even a bit skinnier. For a guy who doesn't skate an entire off-season, he didn't miss a step. On the drill in the video above, his footwork was solid, but his upper body wiggled around awkwardly.

-- Andrew Cogliano's speed is absolutely unreal. Randy Carlyle wants to try him at wing and center. I could really see him being a HUGE addition to the second line (in place of Jason Blake). Both Selanne, Koivu and Blake are fast, but replace Blake for Cogliano and that's lethal speed. Cogliano has a pretty wrist shot too.

-- I would love to see Cogliano and Emerson Etem in a race. Both guys are fast and have interesting ways of reaching their top speeds. Cogliano does an move with one of his legs that looks like he's kickstarting a motorcycle while he's skating. He does that move a couple times before reaching a regular stride. It's hard to describe. I'll try to get video of it tomorrow. Etem gets into somewhat of a crouch position as he picks up speed. His chest looks parallel to the ice. Really interesting to see them fly around the ice.

-- Bobby Ryan is extremely competitive. He goes all out on every drill. He wants every single one of his pucks to go in the net and does his usual yell and look to the sky move if it doesn't. Also, I noticed Assistant Coach Mike Foligno spending more time with Bobby during drills. I remember him doing the same with Corey Perry last training camp and it worked wonders. If Bobby can take a page out of Corey's game - WATCH OUT.

-- Those new to Anaheim weren't used to our crappy ice. I saw a lot of new players falling down. At only an 1/8th full, it was pretty cold inside the arena, but the ice was still crap.

-- Defenseman Kurtis Foster (obtained in the Andy Sutton trade) was not at practice due to swelling in his knee. Foster was expected to be a bubble defenseman, so I don't think the team is particularly concerned about getting him back on the ice as soon as they can.

-- Peter Holland (in gray) looked like he was going to die (or barf) at the end of practice. He was sitting on his butt with his back against the boards after this drill: