As I originally posted in the FanShot (and on my Twitter account @WhatWouldJNDo), Bobby Ryan injured his groin during a drill at training camp today. You could tell he was injured by the sound he made while running the drill. I could tell it wasn't a knee because he wasn't favoring either leg, but instead was doubled over as he made his way to the bench.

Birthday Boy and resident Bobby Ryan Fanboy Robby, confirmed (via the Ducks official twitter account) that Ryan would not be missing any time with the groin injury, and is expected to compete in tomorrow's scrimmage.

Here are pictures of Ryan after injuring his groin and skating to the bench: 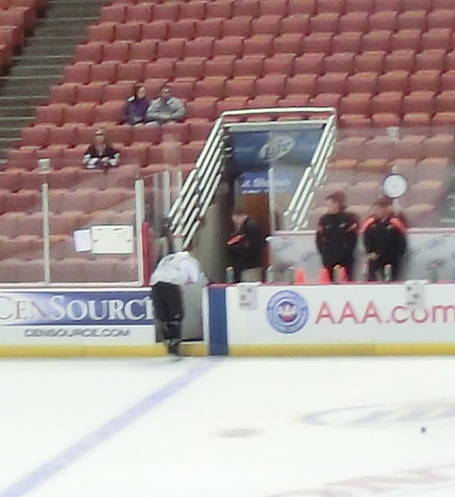 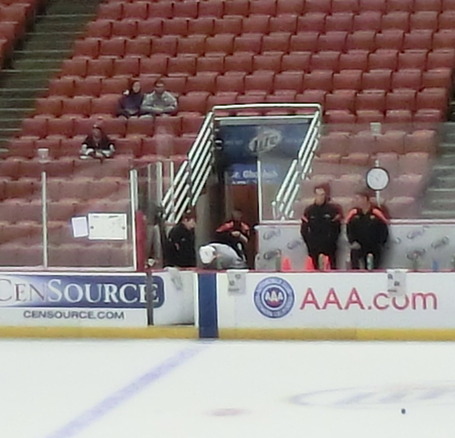 Groin injuries are not to be taken lightly, especially when it happens to a player of Ryan's caliber. Even if Ryan does feel that Advil and ice will do the trick, expect the coaching and training staff not to push Ryan beyond his normal limits. I believe that tomorrow's team scrimmage will be a good indicator of just how hurt Ryan actually is. If he only takes a few shifts, I'd count him as doubtful for the Ducks first scrimmage versus the Coyotes on Tuesday. For a team that's doing everything it can to have a strong start, healing Ryan's aggravated groin should be one of the top priorities.