Share All sharing options for: Gone Camping Day 2: The Returners

Daniel and I went to Training Camp on Sunday. We decided to split the coverage into two categories - returners and rookies. I decided to cover the familiar faces coming back to Ducks camp. Daniel's post covering the rookies will go up a little bit later.

We can all agree that the big news of the day was Bobby Ryan and his strained groin. Normally, I'm not one to freak out about minor injuries, but this one is a bit disconcerting. Groin injuries tend nag a player until he has a chance to fully rest it and allow the groin to heal. And when does that healing happen? In the off-season. What time is it now? The pre-season. I doubt Bobby will don the red "no contact" jersey (he is waaay too stubborn to do that), and I look for his shifts to be cut short during the scrimmage tomorrow.

Beyond the injury, other things happened at camp (gasp)! After the jump are your Day 2 updates on returning players. I'm kind of tired, so there are a lot of videos.

(For a refresher on Group A and Group B's lineups, see yesterday's post.)

Group B is up first and they are considerably more exciting than Group A. I have a couple more videos on my YouTube page that are not included in this post. 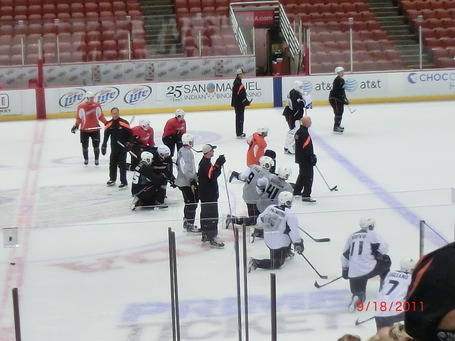 -- First, another note to fans, particularly the lady ones: You embarrass me when you scream "BOBBY YOU'RE SEXY!" as he skates up next to you at the glass. Pretty sure he's not going to turn around and ask you to marry him.

-- This was one of my favorite moments of the day (and I'm pretty sure it was Carlyle's too). The players were practicing modified breakaways where Mike Foligno or Randy Carlyle would take swipes at the players as they skated by. Where Foligo would barely swing his stick towards the on-rushing player, Carlyle would full on chop at the guys. Take a look:

-- Reason number 23948348 to love having Teemu Selanne back on the ice? He screws around and can make Carlyle laugh. After going over a drill about a hundred times, Carlyle was starting to get irritated. As soon as it seemed like everyone was on the same page, you could hear Teemu say the exact opposite of what Carlyle was teaching. The guys started laughing as Carlyle looked at Teemu, shook his head, grinned and blew his whistle.

-- A couple quick ways to NOT make a team? Act like Matt Smaby and absolutely demolish Kyle Palmieri on one shift. Then, the very next shift, trip Saku Koivu and send him crashing into the boards. Or you could act like Nate Guenin and check players wearing "no contact" red jerseys into the boards. No word on if Guenin is colorblind.

-- I really want Dan Sexton to do well. He avoided arbitration by signing a two-year contract extension in the off-season. We all have seen what Dan can do with his blinding speed and wicked quick wrist shot. This next year is crucial for his career as a Duck. If Dan can't find a permanent place with the big club, I could foresee GM Bob Murray shipping him out of town before that two year extension is up. Sexton showed his speed today against the smoothest of Anaheim's skaters, Cam Fowler:

-- Well, Cam is a smooth skater most of the time:

-- Watching Lubomir Visnovsky fly around the rink, I am reminded how lucky we are to have him. He may be tiny (and adorable), but damn does he have wheels. His shoulders that were bothering him during the post-season appeared to have healed. He was FIRING one timers at the net.

-- While Ray Emery was great for us in the playoffs, there was one thing he didn't do quite well - lateral movement (remember the 2304982039 far-side goals scored by the Preds??). Goaltending Coach Pete Peters had his boys practicing their lateral movement and post-hugging skills. Jonas Hiller shows the new kids how it's done:

-- Another way to test how Jonas Hiller's recovery is coming along, send two of your fastest, most skilled players (Saku Koivu and pre-injury Bobby Ryan) down the ice on a 2-on-2.

-- Not only has Assistant Coach Mike Foligno revamped the Penalty Kill by putting Corey Perry and Bobby Ryan on the ice, he seems to have made quite an impact on the players. Watching Foligno, he's a teacher. He doesn't yell or bark like Farrish or Carlyle. I saw many players (especially Bobby Ryan) gravitating towards him after running drills, looking for feedback.

-- Remember how I said Andrew Cogliano is fast? Cogs meet Flash. Did we mention that he's 41?

-- Finally to close out Group B's time on the ice, a conditioning skate. Two things I love about this: 1) Teemu is leading the pack and 2) Teemu takes off his helmet to let his glorious locks waft in the breeze.

On to the less exciting Group A: 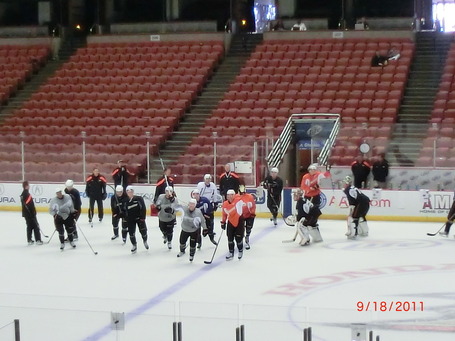 -- After the team did the initial stick raising thank you to the fans, Jason Blake kept raising his stick a few more times on his own. It was weird.

-- Scary moment during practice as Mathieu Carle was battling Ryan Getzlaf for a puck and went careening into the boards. Carle was down for a couple minutes but skated off the ice with help from the training staff and teammates. Word from Carlyle is that Carle is "woozy". I would be surprised if this wasn't a concussion. He grabbed his head as soon as he hit the boards. 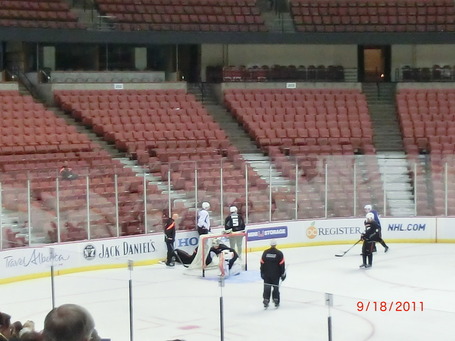 -- I'm not sure what it is about Group A, but they are slower to pickup on drills. It seemed like the coaching staff had to start and stop drills several times. The best part, and favorite Carlyle quote of the day, was while running a forechecking drill. The forward screwed up, and very loudly, Carlyle said, "...AND THAT'S WHAT YOU CALL A TURNOVER."

-- It seems to me that the highest level of competition from Ryan Getzlaf comes when he's facing Corey Perry in anything. Last season was the first time in their careers that Perry had been better than Getzlaf. Think about it, coming up Perry was the squirt (that was almost traded for Mike Comrie), and Getzlaf was the X-Factor. Oh how times have changed. I believe that Getzlaf wants to be better than Perry again and will do what he can, even during practice, to show that he can beat him. Take this drill. Who wins the first one?

-- Now if we only could convince Getzlaf to do that during a game, we'd be golden.

-- Luca Sbisa was getting unnecessarily angry when missing shots on goal. He would slam his stick against the boards several times throughout practice. Not sure what that's all about.

-- I'm convinced that Matt Beleskey has gotten faster. His shoulder looks ok, but he's not taking any slapshots. His puckhandling is marginal. I'm not sure if I attribute that to the shoulder or skill.

-- Brandon McMillan is definitely going to surprise some people this year. Call it a hunch, but he's a lot better than he's given credit for.

-- Finally, Group A's conditioning skate lead by the Captain. Luckily for all involved, with Getzlaf leading they wouldn't have to go full speed.